A truly international and dynamic show! 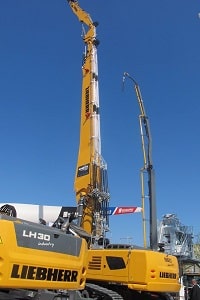 The 10th Intermat show closed its doors on 25 April 2015 with visitor numbers of 183,000 (including 131,624 identified visitors) recorded during its six days. These numbers are slightly down (-8.5%) compared to those of 2012, a record-breaking year, however the result is particularly satisfying given the complex and uncertain economic climate. Moreover, Intermat has cemented its international focus with 35% of visitors coming from 168 countries including from the Middle East, North Africa and Turkey, which all performed particularly well this year.
For the 1,410 exhibiting companies (+5%) with high expectations of this three-yearly event, Intermat 2015 offered an opportunity to prepare for the future thanks to its strong international appeal, particularly in EMEA (Europe, Middle East and Africa) countries, and its ability to attract high quality visitors with investment projects, many of which were decided at the show.
For Maryvonne Lanoë, Show Director,

“Intermat 2015 was a stepping stone in the chronicle of the internationally-announced recovery. The general consensus is that high-ranking visitors and project initiators made this a dynamic show that gave a confidence boost to everyone working in the sector.”

A successful World of Concrete Europe launch
The first ever World of Concrete Europe organised by Intermat 2015 offered a brand new platform to showcase the concrete industry. It attracted 200 upstream and downstream exhibitors and was a highly-anticipated event for the concrete industry as it offered new visitor profiles. The final report – currently being analysed – will provide accurate details about these new categories.

Strong involvement from official French and international representatives
Intermat 2015 was officially opened by Pierre Gattaz, President of MEDEF, and Bruno Cavagné, President of FNTP. During the week packed with networking opportunities, Intermat organised three special days to officially welcome ambassadors from Turkey and the United Arab Emirates and receive official delegations from those countries as well as from Algeria.
All international innovations
Intermat 2015 offered a great platform from which to launch a number of innovative solutions. More than 100 new products and innovations were presented at stands, the best of which were recognised by the Innovation Awards, awarded during the Pre-Intermat held this January in Paris.
Expertise and networking
Intermat 2015 also played a key role in conveying information and leading discussion through its workshops, networking meetings and topical lectures (concrete, leasing, demolition, counterfeiting and EMEA zone distributors).