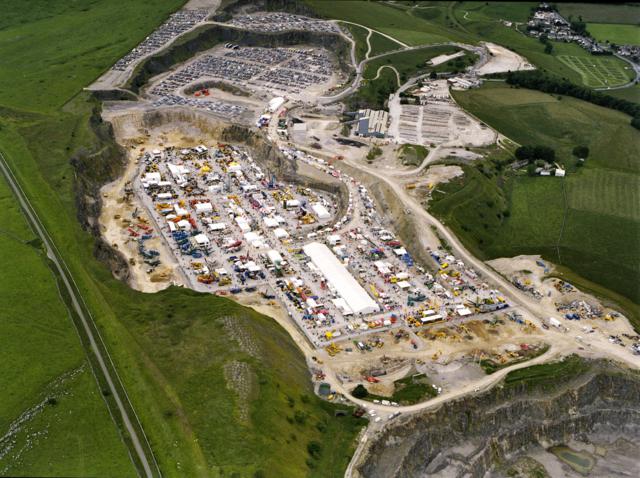 Bucketloads of New Equipment at Hillhead 2012!

Next month the high point of the summer for the extractive and heavy construction industries arrives once again at Tarmac’s Hillhead Quarry, near Buxton, in Derbyshire. Recognized as the world’s biggest quarry equipment demonstration show, Hillhead 2012 promises three days of non-stop action from 19–21 June, when well over 400 UK and international suppliers of plant, equipment, materials and services will be showing off their latest product, innovations and technological developments, many of which will be on show for the first time in the UK. A few of the highlights are outlined below.

Caterpillar dealers Finning will be returning to Hillhead with an impressive stand featuring the UK’s first new 300-tonne class Cat 6030 mining hydraulic excavator to appear in public. Towering over other exhibits, the massive machine will be the centrepiece of the new-look Finning stand, which will incorporate customer experience zones, seminars, various new machines and the official public launch of the new Finning ‘Finsight’ monitoring service.

Visitors to the Bell Equipment stand will get a glimpse of the future with the unveiling of the company’s much-anticipated E-Series articulated dumptruck. Due to go into full production in 2013, a pre-production version of the 30-tonne B30E will be on display revealing its new-shape hood, more imposing styling and extensive technological improvements.

Doosan Infracore Construction Equipment will be exhibiting and demonstrating a host of new products at the show including the DL550-3 and DL4503 wheel loaders, and their largest articulated dumptruck to date, the DA40. The company will also be introducing the new Bobcat 2.6-tonne zero-tail-swing E26 compact excavator. In addition, Doosan will unveil their latest high-capacity telehandler range offering a maximum lift height up to 10m and lifting capacities from 7 to 21 tonnes.

JCB will be showcasing their latest range of products for the quarrying and aggregates industry, including UK debuts for models from their heavyline and compact ranges. Among the new exhibits will be: the JCB 457 WLS wheel loader, which replaces the 456 model; the JS360, JS260 and JS220 tracked excavators; and the 8026 CTS mini-excavator. The company will also be showing one of its latest new-generation skid-steer loader models that use a radial lift version of the JCB Powerboom single-sided lift arm for maximum digging capability and reach.

Building upon last year’s successful introduction of the F-series wheel loader range, Case Construction Equipment will be showing 521F, 721FXR, 821F and 1021F models at this year’s show. Also on show will be the CX250C and the larger CX370C machines from the company’s expanded C-series excavator range. In addition, two models from Case’s recently updated skid-steer line, the SR175 radial-lift and SV250 vertical-lift models, will be on display.

New Holland Construction will be showing and demonstrating several of their latest C-Series machines including the 21-tonne EC215C and 35-tonne EC385C crawler excavators, and the W190C, W270C and W300C wheel loaders. Also on show will be the recently launched L225 skid-steer loader and two of the latest Iveco vehicles for the construction industry.

Celebrating their 40th anniversary this year, Marubeni-Komatsu will be showing a wide range of the new Komatsu machines, including the HD785-7 rigid dumptruck, D65-17 dozer, HM400-3 articulated dumptruck and PC490LCD-10 excavator.

Volvo Construction Equipment will be exhibiting representative models from their full range of machines including the debut appearance of the EC250D crawler excavator and the 30-tonne EC300D featuring a three-piece ultra-high demolition rig, the new L60G and the L220G wheel loaders, an A40F articulated dumptruck, and representative models from the company’s utility equipment and road machinery line-up, including the new DD25 2.5-tonne double-tandem asphalt roller.

Metso Minerals will be displaying several new crusher products including the LT106 mobile jaw unit and its heavy-duty counterpart the LT120, this latter machine being well suited to demanding stationary applications as well as mobile and portable operations. Also on display will be the company’s new HP3 high-density static cone crusher.

Northern Ireland-based Maximus Crushing & Screening will be officially launching two new machines at this year’s show – the Maximus 409 and the Maximus 522T. The Maximus 409 is a small, twin-deck, three-way-split scalping machine developed for users requiring versatility and ease of transport, while the Maximus 522T is a large triple-deck screener designed for medium- to large-scale operators requiring high-capacity, high-specification aggregate screening capabilities.

Taking centre stage on the Parker Plant stand will be two completely new highly mobile concrete batching plants: the ConStar 750 containerized unit with a capacity of 30m3/h; and the semi-trailer ConStar 1500 with its on-board cement silos and a capacity of up to 50m3/h. In addition, further extending the company’s range of tracked crushing and screening machines will be the SR165 scalping screen and the JR1165 crusher, both aimed specifically at the recycling market, and the 1312 impact crusher and GC1200 high-speed cone crusher, both of which are well suited to the quarry environment.

Power System Services will be showing a working model of the Airconveyor, which is suitable for use with cement, mortar, limestone, gypsum, fly ash and biomass materials. The revolutionary system is said to reduce power consumption, friction, belt wear and maintenance, and allows steeper angles of inclination.

Hycontrol, specialists in solids and liquids measurement, will use the show as a launch pad for their new SPS 2000 silo-protection pod. The SPS 2000 is said to be the world’s first fully integrated silo overfill protection system, which is easily fitted via a single flange on top of the silo, while all critical components can be tested at ground level before every fill.

Optibelt UK will be exhibiting their new third-generation, maintenance-free, energy-efficient Red Power 3 drive belts, which are increasingly being specified by operators of belt-driven machinery, such as crushers and screens, due to their ability to reduce costs and improve productivity. Optibelt say efficiencies of 97% can be achieved with Red Power 3 and the belts are available in all standard ‘V’ profiles.

Aqua-Trak, the latest innovative product from Pneutrol International, will be officially launched at Hillhead 2012. This new system provides the ready-mixed concrete producer with traceability, truck tracking, water monitoring and data flow in real time, thereby allowing immediate corrective action when necessary. Also on display will be the company’s Dynamix control system and next generation of wireless batching systems.

Appearing for the first time at Hillhead, US firm Stonemont Solutions will be demonstrating their quality-control, plant-flow modelling and mix-design software for the construction materials industry. Used at more than 2,000 plants across the US, Canada and the UK, the company’s user-friendly integrated software products include aggQC, asphaltQC, concreteQC, crusherQC and PlantFlow.

Miller UK will be demonstrating their latest product innovation, the CASS system, which is designed to work in conjunction with the company’s PowerLatch quick-coupler to alert ground workers when a machine operators is releasing an attachment. The system provides additional peace of mind for site workers and management alike with its LED warning light and audible ‘Stand Clear’ message.

OnGrade will be promoting their Site Zone proximity warning system and OnGarde rapid-deployment CCTV tower. Site Zone uses RFID technology to produce a 360° detection zone around a vehicle and alerts the driver when anyone wearing a Site Zone transponder enters this zone, while the tamper-proof OnGarde CCTV tower offers a cost-effective and efficient solution to site security needs.

According to Spillard Safety Systems, Hillhead 2012 will see the launch of the most technically advanced vision system ever produced for the off-road environment. The surround-view system is fully customizable with regard to application, machine or environment, and is capable of processing images from horizon to horizon.

Likewise, Vision Techniques will be launching their latest innovative safety system – Overview. By utilizing four extremely wide-angle cameras placed around a vehicle, Overview provides a single composite picture that allows the driver to see all around the vehicle at a single glance, thereby helping to reduce the potential safety issue of information overload that can sometimes arise with numerous mirrors, cameras and audible warning systems.