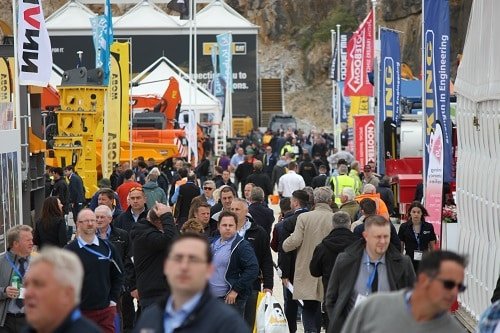 UNDAUNTED by a middle day of almost perpetual rain, visitors turned up in droves for Hillhead 2016, which took place over three days last week at Tarmac’s Hillhead Quarry, near Buxton, Derbyshire.
Despite the wet Wednesday, a bumper 18,655 unique visitors* attended this year’s event – representing a 7.1% increase in attendance over the previous show in 2014.
Moreover, this year saw more working demonstrations than ever before, creating some of the busiest live action ever seen at Hillhead, including no fewer than 14 excavators in new-look quarry face area at one point during the show.
Hillhead 2016 also recorded the show’s largest ever number of exhibitors (470) who occupied the biggest area of exhibition space to date.
According to the organizers, the newly extended area of the showground worked extremely well and is already oversubscribed for 2018, while the extended registration pavilion also proved very successful, prompting plans for a further significant increase in size in 2018.
For all the latest news and ongoing feedback from this year’s show, check out the show/exhibitor news sections at: www.hillhead.com
Further details and dates for Hillhead 2018 will be announced in due course.

*Subject to ABC audit (nb. all registration scanners have now been downloaded and synchronized, adding a further 306 attendees to the previously announced figure)