Cape Town has a number of historic buildings, many of which are still in use today and open to visitors.
A chronological overview is portrayed here.
Castle of Good Hope 1666-1679
The Castle of Good Hope that stands today was erected by the Vereenigde Oost-Indische Compagnie (Dutch East India Company) (VOC), east of the original timber and mud structure built by Riebeeck and is the oldest building in South Africa built by employees of the VOC, garrison soldiers as well as some Khoikhoi in stone, mortar and timber of medieval and C17 architecture. It was designed in a pentagon shape based on the Vauban model. It consists of five bastions, Oranje, Nassau, Leerdam, Catzenellenbogen and Buuren used as prisons and storerooms. It now houses the Western Cape military headquarters as well as the National Museum of Military History. The sea no longer crashes on its sides as land has been reclaimed from it. 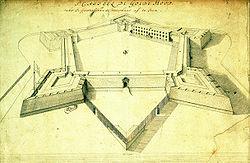 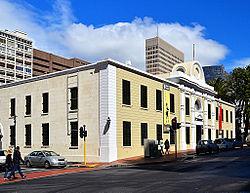 Old Slave Lodge [ImageSource]
Groot Constantia 1685
Groot Constancia Manor House is the oldest wine estate in South Africa and a provincial heritage site in Constantia, in a suburb of the city. It is an example of the Cape Dutch style of architecture and is now converted to a museum within a vineyard. 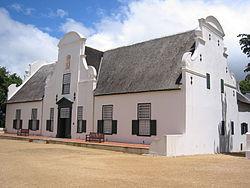 Groot Constancia [Image Source]
Dutch Colonial Influence
The Cape Winelands are famous for Cape Dutch architecture and vineyards. The Dutch farmers who settled in the area influenced the design of their buildings which today is recognised as a distinctly South African feature.
Cape Dutch Architecture
Many original Cape Dutch buildings are protected as part of the country’s national heritage under its heritage legislation, preventing the alteration of these façades. The style has its roots in medieval Holland, Germany, France and Indonesia.
Houses in this style have a distinct and recognisable design, a prominent feature being the grand, ornately rounded gables, reminiscent of features in townhouses of Amsterdam built in the Dutch style.
They were usually H-shaped, initially single-storey with the front section of the house flanked by two wings perpendicular to it. Walls were built with local clay, thick rubble (and later brick), seashells used for lime mortar and whitewashed and roofs steeply pitched and thatched with wild reeds.

“This unique group of C18 buildings stands in Strand Street, across the road from the Koopmans De Wet House, and was originally designed as a single architectural entity to meet the needs of the Lutheran Church in Cape Town.”

It comprised the Lutheran Church: 1776-1792 and rebuilt from 1818-20, a parsonage, which became known as Blomfontaine House and was later called the Martin Melck House 1781-1894 and Sexton House 1781-1783, altered in 1932. They are all National Monuments, listed by the South African Heritage Resources Agency (SAHRA). 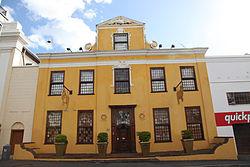 (Lutheran parsonage) Martin Melck House (ex Bloemfontaine House) Strand St [Image Source]
Early research repeatedly sought to justify the term Cape Dutch solely by comparing the decorative form of gables to those of Amsterdam.
However, in the second half of the C18, a period when development of the South African gable tradition occurs, gable architecture gradually ceased to be built in Amsterdam, showing how the style was rooted in the Cape and the houses reflected the tastes and needs of their owners more. The gables were often created by skilled craftsmen imported as slaves from the East and began to develop in a variety of styles.
By the mid-C18, wings started to appear on either end of the basic structures, resulting in the so-called U-plan. Floors were made of compacted earth or Robben Island slate and windows were shuttered.
Around the same time, the T-plan was evolving in the rural areas. In this design, a single wing, with the kitchen at the end, was attached like a tail to the center of the basic building. Later another wing was added at right angles to the T and parallel to the original building leading to the H-plan. This plan became synonymous with many Cape farmsteads.
These houses contrasted those of the town. Open hearths were in every kitchen and houses were built close to each other, prey to fires.
By the end of the C18 many of Cape Town’s thatched and gabled dwellings had vanished. Houses became flat-roofed with a pediment and were often double-storied.
Koopmans de-Wet House
Of the few that remain today, the Koopmans-De Wet House, now part of the South African Museum in Strand Street is the most famous example. It is declared a National Monument and is the oldest house museum in South Africa.
Its façade shows that Cape Dutch houses were built very symmetrically. The central front door was the focal point and two half-windows with two or four full-width windows were often equally spaced either side of it.
Most houses had a front room (voorkamer) into which the entrance led. This gave access to the rooms on either side and led to the back room (agterkamer)
The kitchens had open fireplaces and a Dutch oven fitted with iron bars to hold cooking pots. In Cape Town chimneys were being ruled out because of the threat of fire. In rural areas, the floors were often made of compacted peach pips and ceilings consisted of reeds or saplings.
7 Belvedere Avenue, Oranjezicht
Some of the finest examples of Cape Dutch houses were built in the early C19 during the Victorian era such as 7 Belvedere Avenue, Oranjezicht now also a National Monument.
As sahistory.org.za explains,

“…The double-storey structure was erected soon after the turn of the C20 and is endowed with a number of prominent architectural features including cast iron elements on the verandah and balcony, as well as on the boundary wall…” 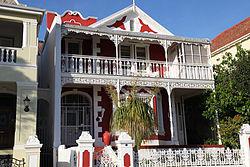 7 Belvedere Avenue Oranjezicht [Image Source]
However, by the middle of the C19, Cape Dutch buildings began being superseded by other architectural styles and today the vast majority of Cape Dutch buildings have been lost to new developments, particularly to high-rise development in the City Bowl since the 1960s.
British Colonial Influence
Robben Island
Just off the coast lies Robben Island, a former hospital for socially unacceptable groups and lepers, military base and prison, where Nelson Mandela and other political prisoners were held during South Africa’s apartheid era in the 1960s until 1996. Today it is a National Monument and a UNESCO World Heritage Site, Robben Island and Robben Island museum. It includes buildings constructed in the Cape Gothic style dating from 1840 to 1895. Archival resources on the site can be found at the Mayibuye Archive in the Main Library at the University of the Western Cape (UWC). 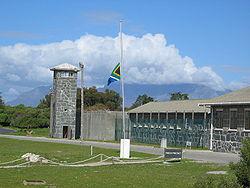 Robben Island [Image Source]
It includes the following structures:
– The clubhouse (formerly the Medical Superintendent’s House) and former Anglican parsonage 1840
– The Anglican Church 1841
This was was used by lepers and built with convict labour and is plastered and painted white on the exterior
– Minto’s Hill Lighthouse 1864
– Church of the Good Shepherd (the Lepers’ Church) 1895
This was built by lepers to the designs of Sir Herbert Baker.
– Rhodes Memorial
Rhodes Memorial is a monument with classical influences constructed in memory of Cecil John Rhodes.
– Cape Point Lighthouse 1857/1914
Cape Point’s first lighthouse stood on Cape Point Peak, 238m above sea level, but due to its elevation, clouds and fog often obscured the lighthouse from shipping.
A second lighthouse was built in 1914, but the original lighthouse still stands on the highest section of the peak and today is used as a central monitoring point for all lighthouses along the coast of South Africa.
Houses of Parliament 1885
The Parliament building itself, which also houses the Library of Parliament, with a central dome flanked by Corinthian porticos and pavilions. Henry Greaves oversaw the building until its completion and was then supplanted by its original designer, Charles Freeman. The House of Assembly was designed by Sir Herbert Baker. 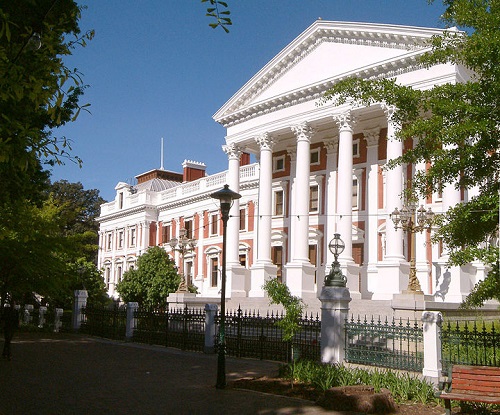 Houses of Parliament, Cape Town [Image Source]
The City Hall 1905
The City Hall is a Cape Edwardian building designed as the result of a public competition, by H A Reid and F G Green, with the contractors T Howard and F G Scott. It was built from oolitic limestone imported from Bath in England and features 39 bells and a 61m high tower.
Much of the building material, including fixtures and fittings were imported from Europe. The workmanship and materials are high quality. Today it is a dedicated cultural venue. 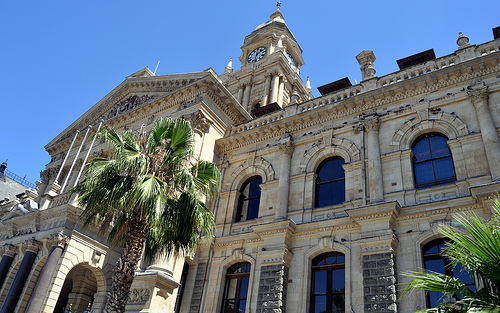 City Hall [image source: Meraj Chayya] Bo-Kaap
Bo-Kaap is home to many Muslims and freed slaves after the abolition of slavery and portrays local Islamic culture and heritage with colourful houses.
The oldest original homestead in Bo-Kaap today houses the Bo-Kaap Museum. 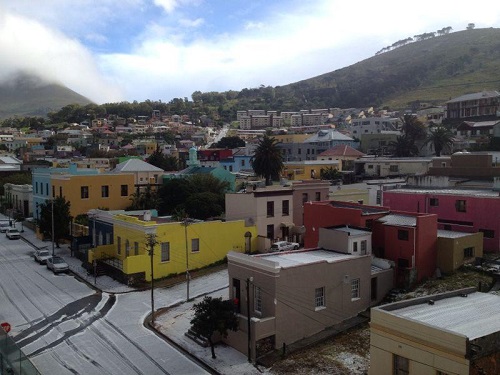 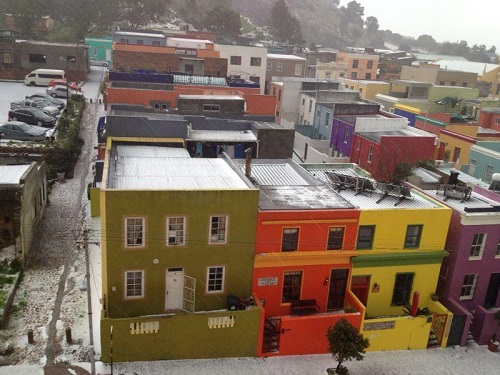 Bo-Kaap Photo Credit: J Walker
The Modern Movement 1920-1930
The Modern Movement contributed Art Nouveau touches to Cape Town’s streets, defined by their geometric forms.
– Mutual Heights building
Previously the corporate headquarters of Old Mutual, today it consists of privately owned apartments, with triangular windows and detailed relief carvings and figurines, cladding a structure that was once the tallest building in Africa.
The architecture of the city stems largely from historic Dutch and British colonial influence as well as a medley of indigenous and other foreign influences that continues to this day. 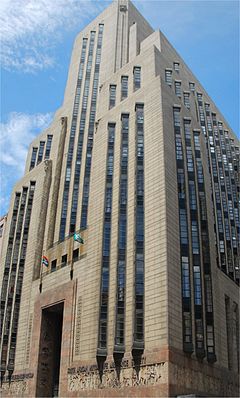 Mutual Heights Building [Image Source]
Author: Mary Bon
Mary is a RIBA accredited architectural researcher, with previous international experience in architectural practice. She has proven research and writing experience for both established clients and innovative start-ups in the construction industry worldwide. She is now based in France and orientated towards bridging the gap between landscape and architecture whilst supporting the causes of local, national and international built and natural heritage