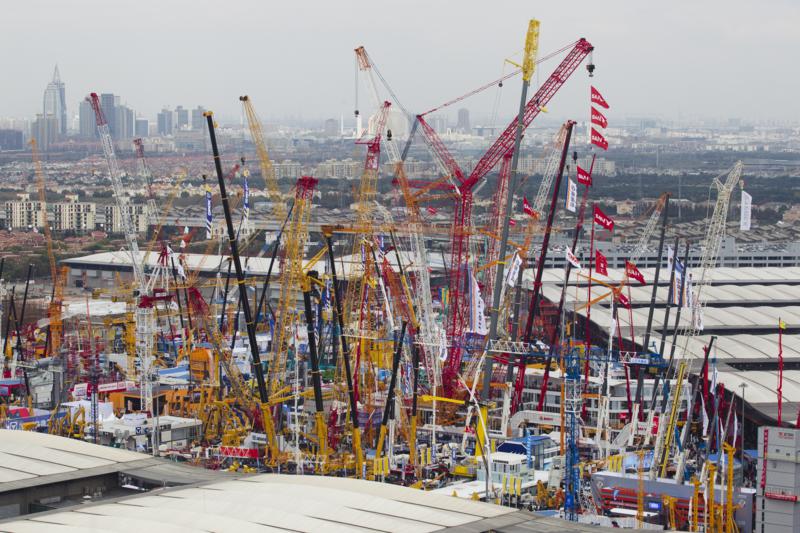 Slowing growth in the Chinese construction market has not affected the inexorable growth of Asia’s biggest trade show, bauma China, which will expand the number of its exhibitors by 40 per cent this year.

Bauma China is expecting more than 2,600 exhibitors from 39 countries at the Shanghai New International Expo Centre (SNIEC) between November 27-30. This will easily surpass 2010’s figures of 1,892 exhibitors.
The space available has also been extended. In 2010, the show was spread out over 230,000 square metres, but the construction of the exhibition centre has since been completed and there are now four additional halls. The space available has increased to 300,000 square metres.
Eugen Egetenmeir, Managing Director of Messe München, the show organiser, said: “Growth may have slowed in China, but in recent years, a lot of Chinese companies have built manufacturing plants. They are keen to approach more external markets and are using bauma China as a platform to market their products to other countries, as well as to home buyers.”
The ratio of Chinese to foreign exhibitors is the highest it has ever been. Around 70 per cent of the 2,600 exhibitors are from the host nation, with the rest from overseas. This is the exact reverse of the first bauma China show back in 2002, when 70 per cent of exhibitors were from overseas, and only 30 per cent from China.
“We’re only talking about a ratio,” said Egetenmeir. “The number of overseas exhibitors has actually grown considerably in absolute terms. There were only 450 in 2002. It’s just that the Chinese construction market has grown exponentially.”
The high level of interest from non-Chinese exhibitors is demonstrated by the presence of eight national pavilions from Austria, Germany, Finland, Great Britain, Italy, Korea, Spain and the US.
The foreign contingent will be led, too, by the spectacular return to bauma China of the US construction giant Caterpillar, which has promised to show off six new machines. Caterpillar will occupy all of Hall N1, which has 11,000 square metres of space.
“Caterpillar are back with a bang,” said Egetenmeir. “They attended in 2002 and 2004, but have not been since. The fact that they are taking over the biggest hall shows their commitment to the Chinese market. Despite slower growth, they appreciate the long-term huge potential.”
Caterpillar is surely right in recognising the importance of China for Western companies. The Chinese market is unrecognisable from the last time Caterpillar appeared at the show eight years ago. China has had the world’s largest domestic construction market since 2010. And, according to trade organisation Germany Trade and Invest (GTAI), it will continue to extend its lead over the US in the years ahead.
There are a number of positive signs for China. Firstly, the Beijing government is again tackling gigantic infrastructure projects in its current five-year programme, which runs from 2011 to 2015. For example, by 2015 they are planning to build 36 million social housing units, at a cost of €169 billion; another colossal project is the plan to build 45 new airports.
Meanwhile, the highway network, which at the end of 2010 extended to 74,100 kilometres, is to be expanded to 83,000 kilometres. Oil and gas pipelines are to be almost doubled to a total of 150,000 kilometres. And 200,000 kilometres of new transmission lines are planned.
Another big theme is water supply. According to the State Council, around RMB four trillion is earmarked for investment in water management by 2020. There is also huge investment in a comprehensive health system, including hospital construction. Finally the Beijing Government is aiming to modernise the energy sector to reduce CO2 emissions.
Boosted by this enormous domestic demand, China‘s construction machinery manufacturers have grown strongly in recent years. According to a recent report by management consultancy Oliver Wyman, the Chinese manufacturer XCMG, for example, doubled its turnover between 2004 and 2010, while Zoomlion quadrupled its sales, and Sany Group increased its sales five-fold to around US$5 five billion. These three firms are now in the Top Ten of the global construction machinery market.
Demand in China for construction machinery is also set to continue growing strongly. A forecast by the China Construction Machinery Association (CCMA), for example, predicts that in 2015, 100,000 cranes will be sold in China, an increase of over 130 per cent on 2010. High growth rates are also predicted for concrete mixing vehicles (98%) and concrete pump vehicles (88%). In contrast to the 3,019 asphalt pavers that were sold in 2010, in 2015 sales will reach around 5,000.
Western Manufacturers exhibiting at bauma China can take advantage of this growth if they target the premium segment of the market, according to Tom Sieber, co-author of the Oliver Wyman report: “Products from Western manufacturers are best suited to the premium segment of the market in China”.
Figures confirm that special machinery of the kind that is not produced in China, is still being imported. For example in the first ten months of 2011 imports to China of cutting, tunnel-driving and other heading machines rose overall by 52 per cent to €190 million.
Construction suppliers from Europe also have strong chances to break in to the market. Corinne Abele, a representative of GTAI in Beijing, said: “International construction suppliers have been present in China for many years, ” she said. “The growing body of legislation regarding energy efficiency and the themes of sustainable construction and renovation and modernisation are opening up new groups of customers.”
As a result, Abele predicted that demand for special-purpose machinery, energy-efficient building systems, modern domestic engineering technology and insulation materials is particularly strong. She said bauma China was an excellent opportunity to present these products and innovations.
Although the exhibitors come from the four corners of the globe, bauma China’s visitors will be premoninantly from China and her neighbouring countries.
Egetenmeir said: “Bauma Munich has a much more international audience than bauma China. It’s easier for the Chinese, as well as people from Thailand, Taiwan , Japan and Korea to pay the €500 to travel to Shanghai than €3,000 to go to Germany. So it’s dominated by the Chinese and countries nearby.
“But the audience for bauma China has been growing and it now stretches as far as the Middle East and India to the West and to Australia and New Zealand in the East. Russia is also quite well-represented as its far Eastern and Southern parts are close enough to China’s borders and it has a dynamic construction market.”