Construction chemicals market in Russia contracted by 1.4% in 2014

As indicated by the results of PMR’s latest report, entitled “Construction chemicals market in Russia 2015. Development forecasts for 2015-2020”, the construction chemicals market saw a decline of about 1.4% in 2014 after a 3% decline in 2013. As a result, the market levelled off at nearly 15 million tonnes in 2014.
Recently, PMR’s market research division, conducted computer assisted telephone interviews among construction and renovation companies in Russia. Among the kinds of work analysed, construction companies most frequently carry out projects involving screed and flooring substrate (75%). Furthermore, companies provide the installation of thick-coat plaster (65%) and the fixing of ceramic tiles and other kinds of cladding (63%). Thermal insulation and masonry services are offered by every second company. 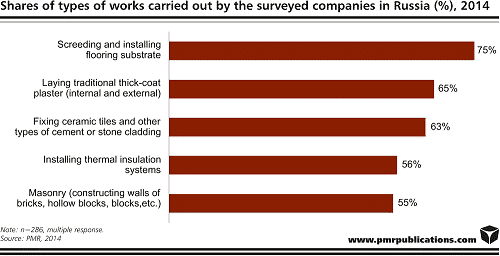 According to respondents, cement-based adhesives are the most popular kind of adhesives used, applied on 64% of the total tiled area on average. At the same time, these are also the least expensive and most versatile kinds of adhesive, which is one of the reasons for their popularity in the market. Dispersion adhesives, which are both stronger and more expensive and are usually applied for decorative cladding made of ceramic tiles, are used in 7% of cases. The findings reveal notable changes in the proportions in comparison with those reported in the previous survey carried out in 2012, showing a substantial reduction in the market share of cement-based adhesives. The share of the least expensive kind of adhesive declined by 18 p.p. over two years, whereas the shares of more expensive adhesives have been on the rise in recent years. 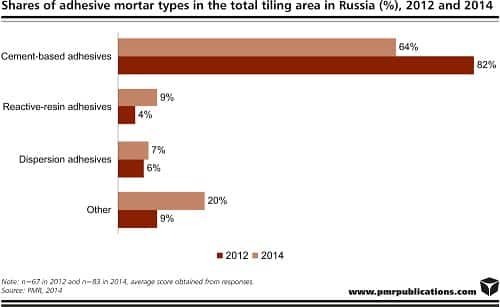 We also asked the companies surveyed to recall spontaneously (without a predetermined list of answers) the names of manufacturers of tile adhesive mortar known to them. The highest brand awareness among the surveyed companies whose business includes tiling took Henkel with its Ceresit brand (31% of responses). The brand boasted an increase of 7 p.p. in comparison with the results of the 2012 survey. This year Ceresit was ahead of Knauf, ranked in second place (27%), which recorded a reduction of 1 p.p. in comparison with the 2012 survey’s results. Unis was ranked in third place.
The responding companies involved in wall construction were asked to state whether they used ready-mix mortar from manufacturers of construction chemicals or whether they would make mortar on site from semi-products such as sand, cement, lime and water. The respondents showed a marginally greater preference for ready-mix masonry products. As the results of the latest survey show, this trend became less prominent because the proportion of respondents using the solution contracted by 4 p.p. in comparison with the figure in the 2012 survey. An increasing number of companies have been deciding to make mortar on site.
PMR specialists also presented several wall construction trends to the companies in the survey and asked them to assess whether there has been an increase in popularity, a reduction or no change. For example, according to respondents, the most significant fall in popularity has been recorded in the field of wall construction with the use of concrete and silicate blocks, but it is important to note that, at the same time, about one-third of the companies surveyed indicated that there had been no change in the popularity of this method. 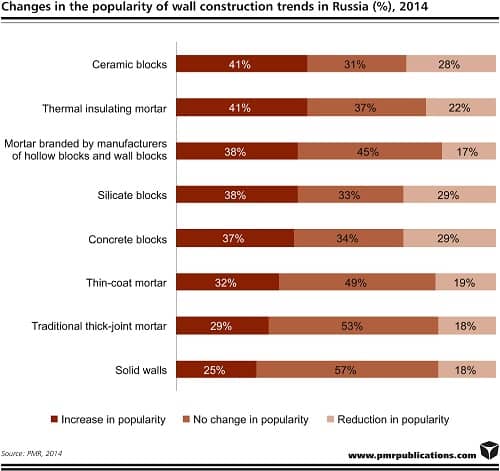 As was observed in the survey carried out in 2012, the shares of the categories of thick-coat plaster, in terms of the area of plaster installed, are divided in the same way as they were two years ago. Gypsum-based plaster is by far the most commonly used form of plaster (55%), despite its poor water-resistance. Cement-based plaster is the second most popular kind of plaster in Russia and represents 28% of the overall area of plastering, despite the fact that it is characterised by low air permeability and is unsuitable for use with mineral wool-based thermal insulation systems. The most adaptable cement and lime plaster remains the third most popular choice (only 16% of the overall area of plastering). Contractors can make plaster on site, using the necessary ingredients, or they can, alternatively, purchase a ready-mixed product offered by manufacturers. Respondents mostly preferred ready-mix plastering mortar made by manufacturers of construction chemicals (77%), with just one-quarter of the area of thick-coat plaster being mixed on site. The proportion of plaster made on site has been reduced slightly, by 2 p.p., over the past two years.
Among the Russian construction and renovation companies, those which offer screed services are the most common (75%). Most of the orders placed with companies making floor screed and substrates pertain to projects in new buildings. Their share as a proportion of orders involving the renovation of existing buildings has grown steadily over the past two years to 54% (in comparison with 52% in 2012). Four in every ten respondents admitted to using screed mixed on site, a 7 p.p. increase in comparison with the previous survey carried out in 2012, largely because of the growing cost saving incentives. This shows that an increasing number of companies mix the screed on site, whereas the group showing a preference for ready-mix products has been on the decline. 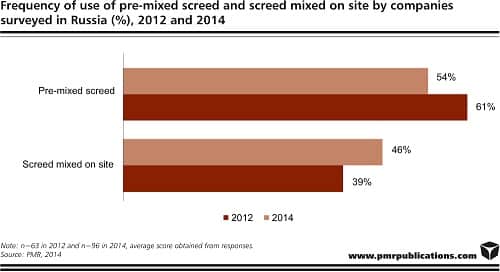 Retrofitting VS New Construction? How to Choose and What To Consider? https://constructionshows.com/?p=36640 #Retrofitting #smartbuilding #greenbuilding #builtenvironment

Our teams in Munich, Moscow, Mumbai, Delhi, Johannesburg, São Paulo and Shanghai remain available despite lockdowns. No matter if we are working from home or from office: we are here to support you. #togetheragainstcorona

See you soon, stay safe and healthy! Your #bauma NETWORK