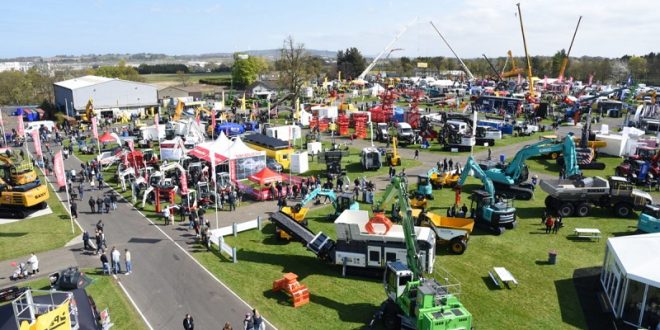 SCOTPLANT 2024 will take place at the Royal Highland Centre, Ingliston on Friday April 26 and Saturday April 27, 2024.

The biennial showcase for Scotland’s plant industry will once again provide a fantastic opportunity to see the latest products and developments from the world’s top construction equipment manufacturers and their local dealers.

Following the success of ScotPlant 2022, organiser Peebles Media Group – publisher of Project Plant magazine – moved to secure the dates for the next instalment of the exhibition, which has been a key event for the industry north of the border for almost quarter of a century.

ScotPlant 2022 featured more than 5,300 unique visitors over two days and just over 200 exhibitors. To meet demand, the show was expanded to include an extra avenue leading from just outside the Lowland Hall to the main showground, for the first time.

SANY’s UK & Ireland marketing manager, Charley Bright, described the exhibition as a ‘fantastic event’ and ‘vital’ to helping the business elevate the SANY brand to the next level in Scotland and the rest of the UK. Deals emanating from the weekend included MacInnes Bros buying the first 40-tonne SANY SY390 tracked digger in the UK. Scot JCB marketing manager Lucy Mullin reported a ‘record’ number of enquiries and sales on both the Scot JCB and SPS stands, while Worsley Plant MD Sean Heron revealed ScotPlant ranks as one of the company’s most important shows alongside bauma and Hillhead.

Project Plant editor Gary Moug said, “ScotPlant 2022, which made a welcome return after a four-year pandemic-enforced break, clearly highlighted the importance of live events. The feedback from exhibitors and visitors – both during the event and in the weeks that followed – was hugely encouraging and we can’t wait to do it all again. Roll on April 2024!”