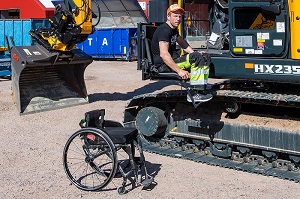 Disability is no barrier for Swedish operator – Hyundai dealer finds a solution to get Patrik back ‘off road’.

Swedish machine operator Patrik Ketti was left paralysed from the chest down as a result of a terrible accident in 2011. Patrik was understandably concerned for his future as an excavator operator and felt doubts about how, and if he would be able to work again, as accessing and working his machine was practically impossible.

Patrik operated a forestry machine before the incident – but forestry work is notoriously difficult with a rough, bumpy, and often boggy terrain, which makes the ground challenging to navigate for even the most able-bodied operator. Patrik’s brother is also a machine operator – he managed to convince Patrik with some persuasion and brotherly love, that he could operate once again, despite of his disability. With plenty of grit, determination, and perseverance, Patrik was, once again, looking ahead to a bright future on the ‘sticks’.

Following Patrik’s ‘sick leave’ he had a meeting with an employment service, who offered him a position as a receptionist. Patrik thought this was hilarious and in his own words said “I’m probably not socially adapted, or comfortable, with reception work.”

There was another option available to him, which was far more practical and a huge leap forward in realising his dream of becoming a plant operator again and continuing his career. The option, and ‘the golden ticket’, was to access financial support in order to adapt an excavator machine to suit his disability. This took some time to come to fruition but the future was looking bright for Patrik. Patrik said, “When I changed to my current Hyundai, it went much smoother with financing and everything, then the process only took a few months and we had refined the solutions even more.”

Patrik contacted his local Hyundai CE dealer, Orsa Maskin, based in Sweden, and spoke with sales director Magnus Bruce, he explained the situation and his disability and asked if the dealer could mount a lift on a 24-tonne Hyundai HX235 LCR crawler excavator.

Magnus Bruce, product manager at Orsa Maskin: said, “This was a question we had never been asked before, however, we were very keen to help Patrik and we immediately started thinking about how such an excavator lift could work.”

Magnus added, “Searching for similar projects online, we found that there was very little, if any, information on such a project. So we decided to sketch and design a solution ourselves. We hired a company that realised our ideas in a 3D format. This CAD design step was instrumental in visualising our ideas and identifying potential problem areas early on. We were able to adapt and alter to suit as the project moved forward.”

Orsa Maskin designed and built an electric lift to help Patrik access his new machine. The pedals were removed from the cab and were replaced with Engcon’s control system. The cabin seat was also equipped with a four-point belt so when the machine is tilted, which is common when working on uneven ground, Patrik remains safely secured. External connections and other aspects of the machine were also adapted for easier access and also to make attachment changes simple. In addition, sprinklers have been installed inside the cab of the new Hyundai – because should there be a fire, it would take Patrik some time to exit the machine.

“One of the most important things, when you are paralysed, is to have a good seat – there is otherwise a risk of pressure injury when you are unable to feel. Everything about my new Hyundai machine works very well – I am very pleased.” Commented Patrik

Patrik added, “Orsa Maskin really helped me to get back on (and off!) the road and back in my cab doing the job I love. I think there must be more operators in similar circumstances to me who would want to keep driving – and they could – if they knew solutions like this were possible.”

Magnus concluded: “When I started working on this project, I was surprised how little information I could find. I’m sure there must be more operators like Patrik, who could benefit from what we have achieved. I am glad we were able to help him back into his machine and doing the job he loves.”

Patrik concludes: “This just shows that everything is possible, where there is a will, there is a way.”

Hyundai would like to thank Gunilla Hellstrom of EMSG Sweden for leading us to this story which proves the adage – The most successful people see adversity not as a stumbling block, but as a stepping-stone to greatness.”