Executive Hire Show 2015 – Kicks Off to a Flying Start with Main Hall and Atrium Virtually SOLD OUT..

The 9th Executive Hire Show exhibitor Kick off meeting took place earlier this week at the events established Coventry Ricoh Arena home in the heart of the Midlands. ‘Kicking off’ proceedings was show director Robert Aplin who was delighted to announce the Main Hall and the Atrium areas of the small plant and tool hire exhibition were all but sold out – with 144 confirmed exhibitors! Mr Aplin also confirmed that over 60% of both areas were also already pre-booked for the 2016 show.
The EHS 2015 show (11th & 12th February 2015) may only be a two day event but its reach and its influence continue throughout the hire industry throughout the year. Of the 144 exhibitors, 26 have been at every show since it began 9-years ago and with the recession behind us there will be 20 new or returning visitors which is an excellent sign of the confidence in the hire market showing real signs of a healthy recovery.
The exhibitor list is looking very impressive – with many of the key players in the hire sector taking stands. These include A &Y Equipment (formerly Ammann), Altrad Belle, Avant Techno, Bomag, Bravi Platforms, Cummins, Doosan, Eurotowers, Fairport Equipment, Firefly Solar Generators, GenQuip, Greenmech, Hanix, Hilti, Husqvarna, Ifor Williams, JCB, Karcher, King Highway Products, Knott-Avonride, Kubota, Leica, Mace Industries, Makita, Manitou, Nilfisk Advance, Obart Pumps, Peli Products, Power Towers, Pramac, Red Plant, Ridge Tools, Shindaiwa, Sumner, Terex, The Access Platform Company, Thwaites, Topcon, Wirtgen, Yokota, Youngman and Zenith. 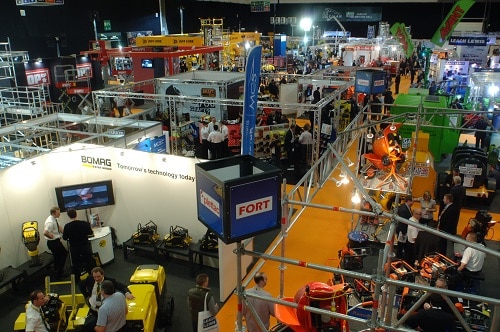 The show team is now working on finding extra space at the show as traditionally exhibitors will book another 200m2 of space between October and January. Once the Atrium is at capacity, the organisers are looking once again to re-open the top tier of the show which they did in 2013. This received mixed views in 2013 – but with renewed confidence the EHS is confident this could be a real success – watch this space for more news!
The 2014 event attracted a record 148 exhibitors and record attendance of 1,908 relevant hire visitors and in 2015 the EHS team is confident they are going to ‘smash’ both records! Not only has getting more space got the green light to sign up more exhibitors but so has the campaign to entice more visitors to attend ‘The Hire Event of the Year!” Last year a total of 700 hire depots were visited by the campaign managers throughout England, Ireland, Scotland and Wales – these visits are set to continue with the assistance of Steve McKenzie and Steve Ritchie.
Another initiative from the EHS team are the ‘Regional Executive Hire Road Shows’ which have been well received – local hirer companies are invited to come along and see just what the EHS has to offer and can take advantage of special deals from participating suppliers, available only at these events. Supported by Altrad Belle, Hire Supply Company, Youngman, Safety Lifting Gear, Dri-Eaz and Hilti the first event planned is Tuesday 14th October at the Ricoh Arena from 4.30pm until 7.30pm. The following is 16th October at the Holiday Inn Bristol at 4.30pm to 7.30pm, with Makita as an additional sponsor and then Wednesday 19th November at the Wellington Arms on the A33 Basingstoke, where Obart is also a supporting brand.
At the Kick Off event Rob also introduced the shows new Development Manager, Gemma Gratton. Gemma has worked in the past for Turner Access, Hewden – her principal role will be to further the shows connections between hirers and suppliers.
The 2015 EHS website is where visitors and exhibitors will find the latest news about the show which will be updated on a regular basis between now and the February event. Visit www.executivehireshow.co.uk. All that’s left to say for now is – welcome to the Executive Hire Show 2015. Put the 11th and 12th February 2015 in your diary now – it’s going to be the place to be seen and the place to be seen in!