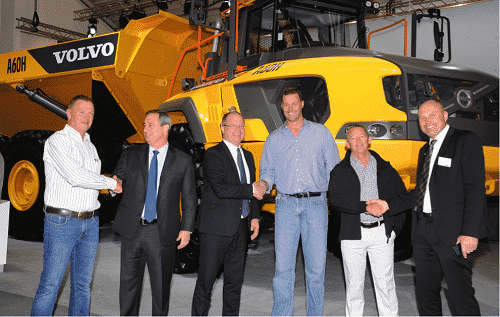 Burgh Plant Hire from South Africa has become the first customer to place an order for not just one but three of the hotly-anticipated Volvo A60H articulated haulers at Bauma 2016.
Following months of discussion and speculation in the press, Volvo Construction Equipment (Volvo CE) finally launched the industry’s largest ever 6×6-configuration articulated hauler to great fanfare at the Bauma exhibition in Munich last week. The Volvo A60H – displayed on the indoor Volvo stand next to its ancestor ‘Gravel Charlie’ from 1966 – attracted wide attention from visitors for its sheer size and capacity and it was not long before the first order was placed.
Burgh Plant Hire – a long-standing customer from South Africa – placed an order for not just one but three Volvo A60H articulated haulers, as well as one Volvo EC950E excavator. The Volvo EC950 excavator was also unveiled to the public at Bauma and likewise represents a new size class for Volvo CE in its respective product category.
Press bore witness to a special handshake between Stanley van der Burgh, CEO and owner of Burgh Plant Hire, and Roger O’Callaghan, CEO of Babcock International Group’s African operations, on the third morning of the show. Martin Lundstedt, CEO of the Volvo Group, Martin Weissburg, president of Volvo CE, Tomas Kuta, president of Volvo CE Sales Region EMEA, and Carl Zietsman, operations manager at Burgh Plant Hire, were also present.
“It feels great to be the first customer for the A60H. It’s a good product – a magic machine,” Stanley van der Burgh said.
Van der Burgh already owns at fleet of more than 100 Volvo machines for his company’s coal mining operations – the majority of them articulated haulers – so had full confidence in the new model.
Moving more material quicker
“We run a huge fleet of Volvo A40s and we don’t think there’ll be much difference except we’ll be moving more product quicker. They’ll just fall into the usual fleet with no changes,” he added.
The Volvo A60H offers an impressive 40% higher payload than the company’s previous largest articulated hauler, the A40G and will no doubt help to improve the productivity and efficiency of Burgh Plant Hire’s operations.
When it comes to maintenance and servicing, Burgh Plant Hire will be supported by independent Volvo dealer in Southern Africa, Babcock International Group. The dealer recently inaugurated its 100 million rand (53 million SEK) branch nearby in Middelburg, South Africa, cementing its commitment to Volvo customers in the coal mining business. Over the years Babcock has cultivated a strong relationship with Burgh Plant Hire.
“With all OEMs there are challenges but Volvo stands up and sorts the problem out with great backing and great service. We are very happy with the team we work with at Babcock,” he concluded.