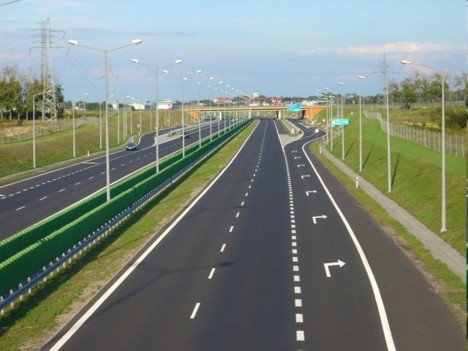 Highways – a helping hand for the Romanian economy

The desire of highways to run on decently is no longer present only in the minds of the drivers, plagued by the bad roads. Highways are built at low pace, with lots of stumbling and especially by using lots of money. The contentious would say that Romanian highways are some everlasting money-consumers; but still it seems that the investments of the ministries do return to the state pocket.

During 2011 Romania has signed contracts worth 2 billion Euros for highways constructions and, should the works proceed as planned, in 2012 we shall have another at least 500 km of brand new highways. Taking a look beyond the number of kilometers, not pleasing anyone, starting these projects meant hiring a significant number of people, a fact that weighs much into lowering unemployment.

Besides the fact that next year 800 more people will be employed for the construction works, let’s not forget that these are made with Romanian materials; thus another plus for the construction of highways. The World Bank comes to strengthen the belief that building does not mean sterile investments; developing states rose economically by 1.6% from 2000 to 2005 due to infrastructure improvements, whether roads, water or electricity supplies.

Regarded from another angle, Romanian highways are a true blessing for the labor market. The 15 running projects employ over 5000 people, and considering that a job on the construction site means another five in the related industries, then 20.000 people work due to the road infrastructure development projects; and their number will increase by at least 2000 when the works will start in force at the IV Pan-European Corridor.

The companies involved in constructions state that 90% of the materials are purchased from Romania; bitumen, cement and machinery that is. Under these circumstances, parapets and dilated joints are to be purchased from the EU market, as sole source.
The more ambitious the project, the more significant the cost increases, and more money for the companies involved. It so happens with the IV Pan-European corridor. Only building materials amount up to 1.2 billion Euros. To be kept in mind that the ministry intends to modernize also national roads, additionally to highways projects. In other words, the request of materials and labor is constantly growing. There is a total of 2000 kilometers of roads envisioned for rehabilitation.

The state is favored by these contracts with foreign companies since a large amount returns to its pockets in taxes from subcontractors employed by them. Counting on infrastructure Romania won’t have anything to loose, since 75% of the constructions market belongs to this sector, i.e. about 10 billion Euros.

Romanians have ambitious plans for the future. They shall soon see another project staring: the highway to link Timişoara to Belgrade and continue to Italy. At the end the highway should measure about 660 kilometers, of which 100 only in Romania. The funding for the new project has not yet been found.

The highway fee to cover expenses

Highways generate issues also after they are built. Once funding allocated for constructions, the European commission expects Romania to charge highway fees. In order to easily cruise on a modern highway, one should pay roughly 5 Euros per 100 kilometers.

The highway fee is not regarded with a friendly eye nor by the drivers, who do not see why they should pay, neither by the government, who is reserved in proposing a new tax for Romanians. At the end it seems that the fees should be of use mainly to cover part of future damages.

Since the fees can only be small and the traffic won’t be that intense as to cover for the damages, the state is in the position to allocate funds for restoration of the highways, when needed. A higher charge shall be out of question since no one would be willing to pay 40-50 Euros to travel on our highways.