Hungarian construction market to grow 10% in 2014

Civil engineering and non-residential construction are the sectors most likely to drive Hungarian construction in 2014-2019. Thanks to the increasing number of civil engineering tenders, particularly in transport infrastructure construction and environmental protection-related construction, Hungarian construction output is to see steady growth in the coming years.
According to a new report entitled “Construction sector in Hungary 2014 – Development forecasts for 2014-2019” published by the analytical and research company PMR, following a year on year drop of almost 9% in 2012, Hungarian construction output recovered in 2013, growing by approximately 10%. Spurred mostly by transport infrastructure construction the growth has been made possible by the accelerated absorption of EU funding towards the close of the EU funding bracket ending in 2013. Moreover, in 2014 similar growth is expected.
PMR’s in-depth report also highlights major factors that are to have a favourable bearing on market forecasts, these include: the launch of a new six-year EU funding programme, government efforts to accelerate the tendering process in civil engineering construction, the resumption of government programmes to aid the retrofitting of residential properties, promising plans for environmental protection-related construction, and increased orders for construction companies.
There is also consideration of the causes of adverse effects on forecasts, such as government insistence on restraining retail development, low consumer confidence, the dire financial situation of construction companies, and continuing paucity of issued building permits.
In 2013, road construction turned out to be one of the segments driving industry growth, and it is likely to remain so for the next two years at least. In the same year public tenders worth over €1.6bn were organised for road construction and, by the end of the year, contracts for orders worth €1.4bn had been signed. They cover planned work on 30 km of motorways, almost 70 km of expressways, over 70 km of bypasses, and five roundabouts, as well as the reconstruction of 388 km of existing roads. Another €415m is already earmarked for road upgrades in 2014.
Some of the most significant road construction projects underway include a 23-km motorway section between Mako and the Romanian border, a 11.9-km motorway section between Or and Vasarosnameny in northeast Hungary, and the construction of the M4 motorway Abony-Fegyvernek.
Railway construction was one of the few sectors that not only avoided a large-scale drop during the crisis years, but actually saw remarkable growth compared to the pre-crisis years. Moreover, the Hungarian government announced last year that it wants to allocate 90% of the Connecting Europe Facility (CEF) funds to railway development between 2014 and 2020. Hungary is expected to access a total of €1.075bn from the CEF. 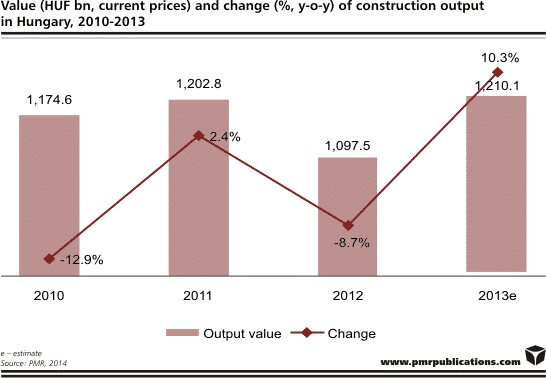 In the non-residential construction sector the number of projects announced for development is growing and indicates that a true recovery is expected in 2014-2015. However, the development prospects for non-residential construction are influenced by two main issues. Firstly, the European debt crisis and its changes and effects on the struggling Hungarian economy. Secondly, the sentiment of the market to governmental measures. Large institutional investors are still concerned about the government’s future political decisions, and persistent distrust could make them abandon even the rare investment plans they may have.
On the other hand, residential construction has been at low levels of development and is hardly picking up at all. Consumer confidence is minimal and the appetite for investment or debt-taking is very weak. No major projects have been announced in the sector in 2013. It was hoped that residential construction would be revived by government plans and incentives, but these were not very strong. One of the decisions that is likely to help this ailing sector regain some health in 2014 is the resumption of the retrofitting programme Panel II, which was suspended in 2009 under budgetary pressures. Even with that, residential construction output is still to take many years to recover as the involvement and commitment of developers in the sector has fallen into a deep slumber. 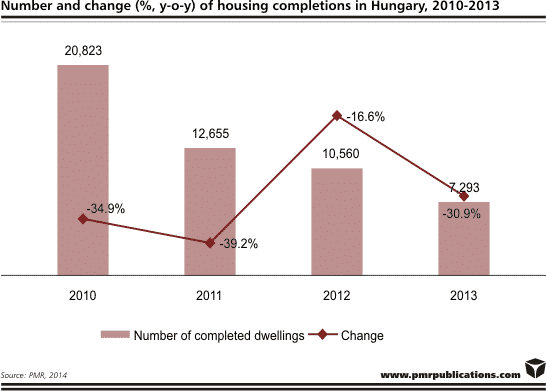