A Hyundai HL 760 wheeled loader, supplied by Cumbria-based Hyundai dealer, Taylor and Braithwaite, was the machine of choice for civil engineers, Waitings Drainage and Pipeline contractors, also based in Cumbria, who were one of 16 contractors working on the high profile, Fallago Rig Windfarm project, located on an isolated and windy plateau on the Lammermuir hills in Berwickshire on the Scottish Borders. 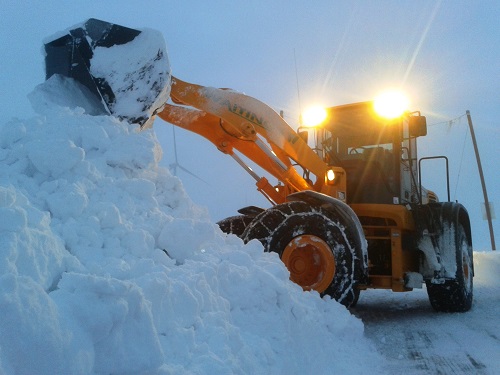 Fallago Rig was EDF Energy Renewables most significant onshore development to date comprising 48 turbines with an installed capacity of 144MW – the windfarm’s annual output will be equivalent to the electricity consumption of around 90,000 homes.The site, which started generating in March and was commissioned in May, is one of the largest onshore wind farms to be built in the United Kingdom.

Construction of the main works was undertaken over a 16 month period – beginning March 2012.  At its peak 250 people worked on site each day and a total of 335,000 man hours were worked without a reportable injury.

It was Waitings job, as Winter Maintenance and Access Support Services contractor, to ensure that permanent safe access 24hrs a day 7-days a week was provided to the remote and very complex project.  This was a tough task as Scotland is known for its unforgiving winters and heavy snow fall. In short it was solely down to Waitings and its Hyundai machine to keep this construction site operational. 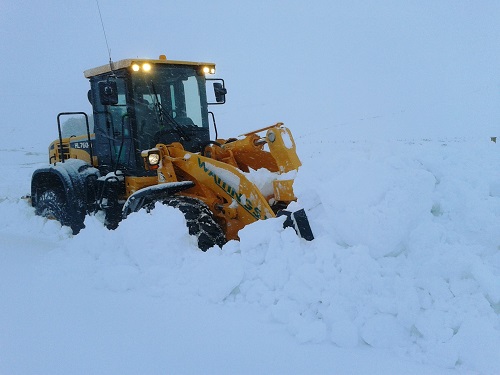 Waitings Director, Adrian Ash said: “The project was intense and we had to have a machine that was 100% reliable – and the Taylor & Braithwaite Hyundai 760 wheeled loader was unbelievably effective.  The machine was modified with heavy duty snow chains and fitted with a high capacity shovel – this machine single-handedly kept this site operational.  Some days the machine was operating during the day and through the night clearing heavy fallen snow, so the sites 4x4s could transport personnel to the wind farm sub-stations and turbine locations, which were snowed in – this was a breeze for the Hyundai.”

Mr Ash added, “This machine outperformed other machines in its class and was meticulously reliable in very adverse conditions.  It was sometimes parked up in sub-zero temperatures for extended periods and yet it still started first time, we had no failures with this product!”

Another modification, as an added safety feature, to the Hyundai wheeled loader was a GPS system.  The roads were mapped out on the system and allowed operators to follow the GPS in complete ‘white outs’.  “The GPS was 100% effective and the Hyundai performed very well with the system, this helped to satisfy a very robust health and safety culture on site and offered the client comfort on our delivery method.” Concluded Mr Ash. 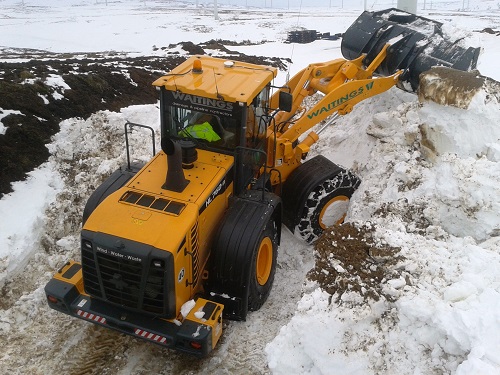 Ian Burton, Sales Director, Taylor & Braithwaite said, “The ‘standard spec’ wheeled loader was more than capable of working in such harsh conditions and a difficult environment – when we supplied the machine to Waitings – I had no doubt that the HL 760 would do the job required with ease!”

Mr Burton added, “Waitings have a wide range of Hyundai machines which run into double figures, from 2.7 tonne mini’s up to 30 tonne excavators, a wheeled excavator and the wheeled loader and shovel, used on the Fallago Rig project.  The company was the very first of our customers to purchase Hyundai machines; we have an excellent working relationship with Waitings and are pleased to be working alongside a well-respected organisation, who works with major contractors in the area.”

Waitings contract with EDF Energy Renewables continues now the Windfarm is operational, Mr Ash said, “We are pleased to retain our access support service contract with our client and maintain safe access for the site maintenance teams to Fallago Rig and many more of EDFER’s assets.” 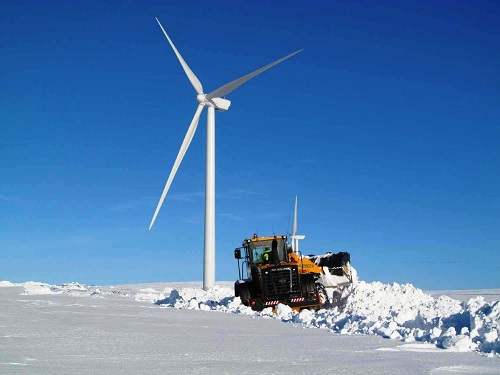 The local community also benefited from the project, which saw £3 million directly invested in the local economy. In addition over 350 jobs were created in Scotland during the construction phase of the project.

Going forward Fallago Rig Wind Farm and the Roxburghe Estate will pay £240,000 per annum, for the life of the project, in to the local community fund to help enhance the quality of life for local communities and visitors to the Borders. The fund is being managed by the Tweed Forum.