“…Machu Picchu was probably the most amazing urban creation of the Inca Empire at its height. Its giant walls, terraces and ramps seem as if they have been cut naturally in the continuous rock escarpments.”   ~UNESCO
A pedestrian ‘ruta’ (route) known now as the Inca Trail was built by the Incas to Machu Picchu as part of the Gran Ruta Inca (Qhapac Ñan),.It is the major route of their network connecting the Inca Empire from southern Colombia to central Chile, a 20-mile (32km) spur off the Gran Ruta Inca.   It has a buttressed structure with granite paving stones.
It is appreciated that the greatest construction challenge on the site for the Incas would have been the risk of landslides and unstable earth. There was a need to stabilise the slopes of Machu Picchu with many terraces and to spend a long time designing foundations and on site preparation in order to build for longevity. Researchers perceive that Inca engineers spent between 50% – 60% of their overall effort on below ground design including foundations and site preparation, to ensure that the city would be eternal. As vast as the city appears, there is understood to be 60% more underground as foundation structure.
A research excavation carried out in the central plaza area of the site separating the eastern urban sector from the western urban sector went down about 9 feet. It was found that about 3 feet of rich topsoil was found over sandy, gravel rich soil over an underground, subsurface drainage system of waste rock from the granite that had been cut over the years.
Researchers explain that the 700 or so terraces present over the site of Machu Picchu have high permeability, so the water underground is carried away safely. These terraces are perceived to be fundamental to its longevity. They acted as filtering galleries, which ensures that the terraces never flood as water is filtered through these progressive layers of material. Instead of pouring down the mountain surface, the water slowly works its way into the ground minimising the likelihood of erosion. With this basic design method, the Inca constructed the first terrace at the foot of the mountain, then formed the next and so on to the top. 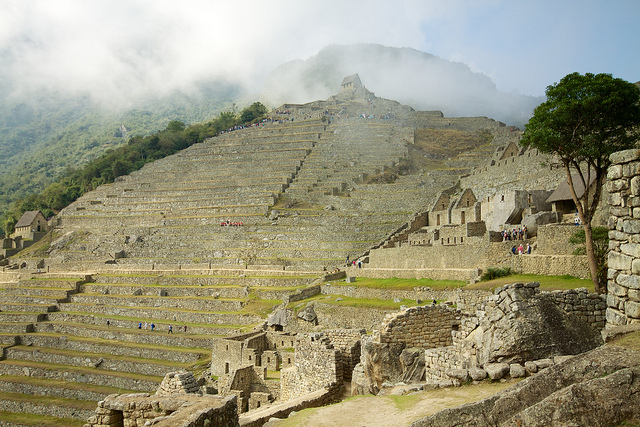 Looking back at the Southern Agricultural Terraces by McKay Savage 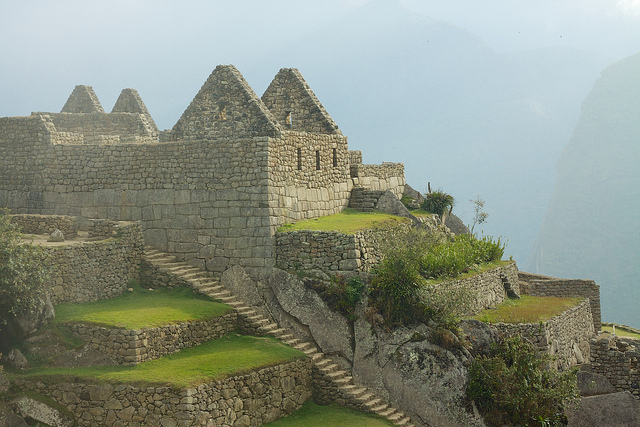 Steps and Terraces by McKay Savage 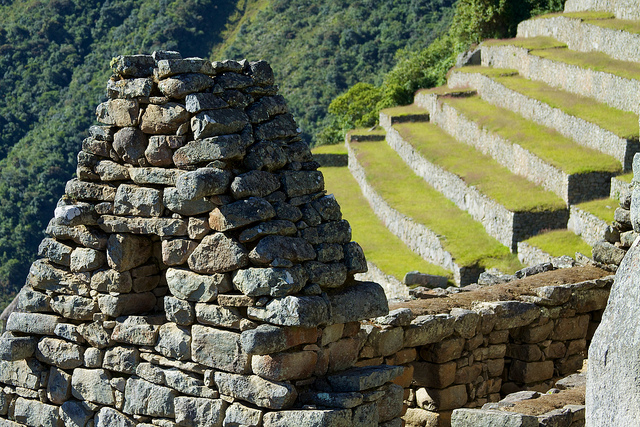 Walls and Terraces by McKay Savage 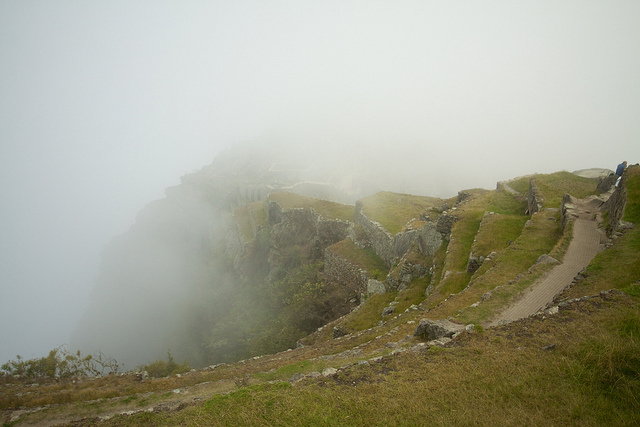 Terraces in Clouds by McKay Savage

Without these terraces, landslides would have occurred, so their primary use was the means for soil stabilisation and the support of buildings or paths. However they also provided the city with a valuable agricultural area. The power of the Inca Empire lay partially in its ability to produce food to sustain a sizeable community as at Machu Picchu. It is believed that more land was under cultivation during Inca times than is today in modern Peru.
Beyond this researchers point out that they were not built just for utilitarian soil stewardship purposes, but that their curved form was a masterpiece of both environmental and aesthetic design.
Researchers have determined that Machu Picchu receives around 76 inches per year rainfall, mainly during the wettest 7 months of the year. The thatched roofs over the site would have incurred substantial water run-off that was handled by an urban drainage system.
In the event that run-off water came into the canal during heavy rainfall, the Incas provided two safety valves, one in the middle of the agricultural zone which discharged out onto the agricultural slope and infiltrated into the ground and another at the main drain. This created a balanced system all the way from the spring to the main drain.
Around 130 drainage holes have been found that appear to have been planned during the initial construction of the walls, exemplifying their forward thinking.
Although it was a city paved with stone with few places for rainwater to go, many of the drains delivered the runoff from the elevated parts of the city into the central plaza.
From the city at Machu Picchu it is also evident that the Incas had a sense of hygiene and pure water, long before the Western world.
The role of water, its supply and sacred role, in the construction of the city is perhaps one of the leading determinants of its layout. Separate supplies of drinking water, bathing water and even for irrigation for the terraces are all ensured by the waterway system.
Their aqueducts and irrigation systems are approximately 600 years old including many interconnected water channels that unite and form ponds and ‘pacchas’ (fountains).
There was a natural spring, canal and a series of 16 fountains on the site providing drinking water. The canal led for 2,500 feet to a series of fountains via an engineered aqueduct system. Prior to the felling of trees on the site and the subsequent construction, it is understood that the Incas studied the site, the spring and the water supply for a year or two to establish the flow and its variance over the year.
The Inca spring is perceived to have been a principal controlling factor in the building layout. Pachacutec was to have first use of the cleanest water from the fountain closest to the source, so that determined where they built his residence and the Temple of the Sun there, a three-sided building called Wayrona and another sacred fountain.
The location of the spring was fixed and the Incas assessed the slope of the canal and set it at an average of about 3% and fixed its length at about 2,500 feet. These things were determined by nature and by hydraulics.
The aqueduct was built in such a way that it would be isolated from drainage holes and from potential pollution and laid out in such a way as to provide for maintaining pure water.  It was also constructed with the minimum number of components in order to reduce binding, and so minimising water leakage. The waters route is simply carved into these rock components.
Engineering evidence further describes that the canal was just the right size for the spring yield, and the fountains are just the right size for the canal. All of the 16 fountains were established to handle what has been calculated to be between 6 and 30 gallons per minute, depending on the time of year, enough to sustain a population of close to a 1000 people.
The Incas also allowed for the sight and sound of flowing or falling water in the arrangement of the site. This included the sight and sound of the Urubamba River 1,600 feet below. The noise at the sacred fountain and the Wayrona is perceived to be particularly pleasant.
Just beyond the limits of Machu Picchu is an overhanging rock. This rock acoustically amplifies the sound from the Urubamba River 1,600 feet down. 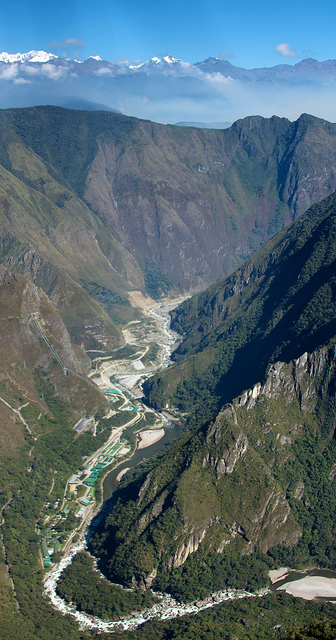 Author: Mary Bon
Mary is an RIBA accredited architect with international experience in the field as well as proven research and writing experience for both established clients and innovative start-ups in the construction industry worldwide. She is now based in France and orientated towards bridging the gap between landscape and architecture whilst supporting the causes of local, national and international built and natural heritage.


This post is part of a series of City heritage and development articles, you can find all of the articles here: