Marseille is the second largest city and metropolitan area in France with a city population of over 853,000 within a metropolitan population of over 1.6 million. It extends over 24,000 hectares, including 9,000 designated natural areas. It is the country’s largest city on the Mediterranean coast and largest commercial port, the capital of the Bouches-du-Rhône departement in the Provence-Alpes-Côte d’Azur région. The Rade de Marseille (Maritime facade of Marseilles) has been on the UNESCO World Heritage Tentative List since 2002. 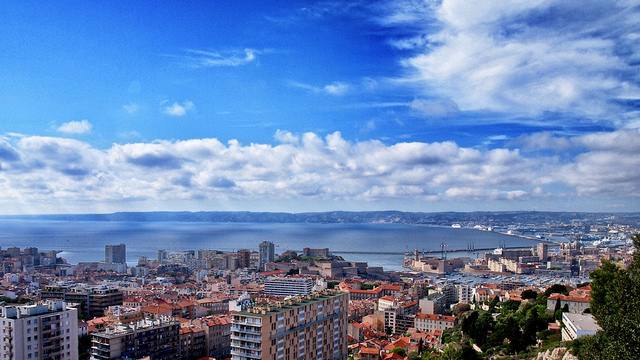 Antiquity and Roman Times
Alleged to be the oldest city in France, it was founded in 600 BC by Greeks from Phocaea as a trading port under the name Massalia.  It was one of the first Greek ports in Western Europe and the first settlement to be given city status in France.  It allied itself with the expanding Roman Republic for protection. This protectionist association brought aid in the event of future attacks, and brought its people into the more complex Roman market. The city thrived,  acting as a link between inland Gaul and Rome and  maintained its independence until the rise of Julius Caesar.  It was during this time that Christianity first appeared in the city, shown by catacombs above the harbour..
As Henri Réziny writes in a paper, translated from French by Marion Bats Topography and Town-Planning in Ancient Marseilles [Bouiron and Gantès 2001 ],

“Greek Massalia was founded…on a hilly site, north of Vieux-Port. During the C6 the city developed towards the north and east.  The new quarters are quite regular and, probably since the first quarter of the 6th century, protected by a mud-brick fortification wall. We know very little about the public spaces (agora, sanctuaries), but recent excavations have shed new lights on the Hellenistic and Roman baths, harbour installations (Greek shipyards, Hellenistic military boathouses, Roman dockyards and wharfs), Hellenistic and Roman necropoleis, and suburban quarters (Archaic clay quarries and Hellenistic vineyards).
The recent advances in archaeological research in Marseilles are due essentially to an extensive programme of urban renewal that has been taking place there as well as the rescue excavations that have been systematically organised alongside in the past 20 years. The various bodies involved in archaeological research in Marseilles (Service Régional de l’Archéologie, Atelier du Patrimoine de la Ville de Marseille, Institut National de la Recherche Archéologique Préventive, Université de Provence (now Aix Marseilles Université) and Centre  National de la Recherche Scientifique regularly collaborate in the organisation of meetings, the publication of archaeological findings and works of synthesis…”

Post Roman Empire
With the decline of the Roman Empire, the town fell into the hands of the Visigoths. Eventually Frankish kings succeeded in taking it in the mid C6.  Emperor Charlemagne and the Carolingian dynasty granted civic power to it and it remained a major French trading port until the middle ages.
It regained much of its wealth and trading power when it was revived in the C10 by the counts of Provence.
Between 1348-1361 their were bubonic plague outbreaks and it was sacked and pillaged by the Aragonese in 1423.
Middle Ages and Renaissance
The city’s population and trading status soon recovered and in 1437, the Count of Provence René de Anjou established it as the country’s most fortified settlement outside of Paris.  It was then used as a strategic maritime base to reconquer his kingdom of Sicily.
Towards the end of the C16 plague the hospital of the Hôtel-Dieu was founded. 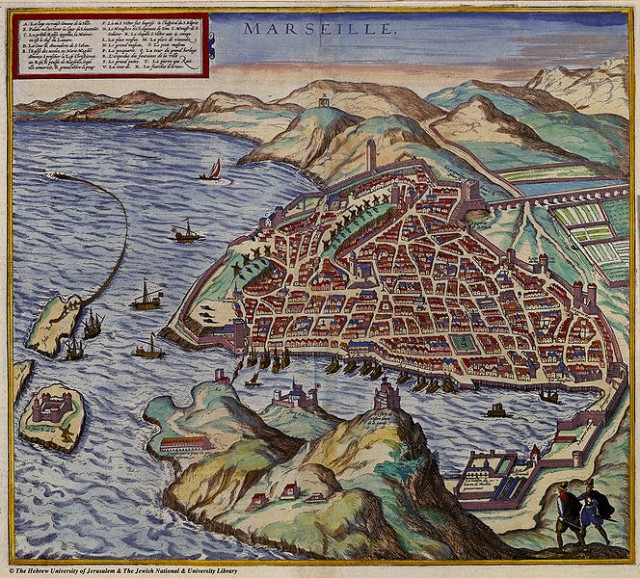 Marseilles 1575   [Source]
A century later Louis XIV descended upon it in order to counter a local uprising against the governor. As a result, fort Saint-Jean and fort Saint-Nicholas were erected above the harbour. Over the course of the C18 the port’s defences were improved and it became important as the country’s leading military port in the Mediterranean. .
In 1720 there was another plague.
From 1770 to 1791 Jean-Baptiste Grosson, royal notary, wrote the historical Almanac of Marseille, published as Recueil des antiquités et des monuments marseillais qui peuvent intéresser l’histoire et les arts (“Collection of antiquities and Marseille monuments which can interest history and the arts”), which for a long time was the primary resource on the history of its monuments.
Post revolution
During the C19 it was the site of industrial innovations and a growth in manufacturing.  The rise of the French Empire and the conquests of France from 1830 onward stimulated maritime trade and raised the prosperity of the city.  Maritime opportunities increased further with the opening of the Suez Canal in 1869. This period is reflected in many of its monuments.
During the first half of the C20 it celebrated its port of the empire status. In the Second World War, it was heavily bombed and much of it was rebuilt during the 1950s.
From then on, it has served as an entrance port for over a million immigrants.  Many have stayed and given it a French-African quarter with a large market. 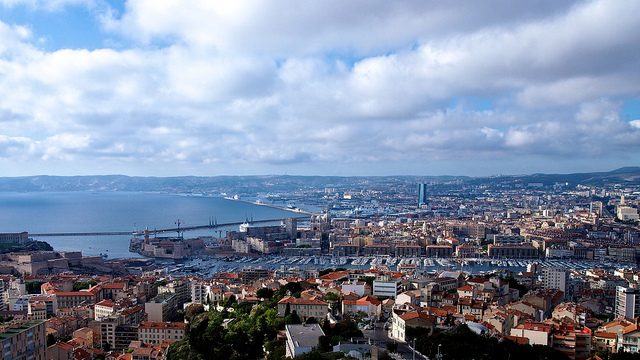 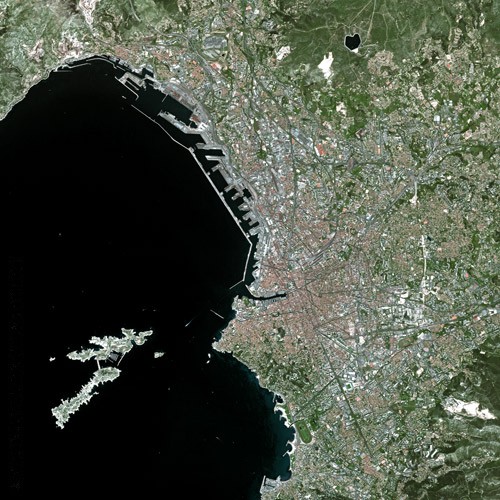 Rade de Marseilles [Image Source]
The southern limit of the Rade is towards the Madrague de Montredon next to the Massif de Calanques, a protected natural site.  The Directions Régionales de l’Environnement (DIREN) stipulate important requirements in the event of any extension of the UNESCO listed site as World Heritage Listing could threaten the preservation of it.
It is also noted in the UNESCO inscription that the Grotte Cosquer, a Monument Historique with evidence of Paleolithic human presence lies within the Massif de Calanques.