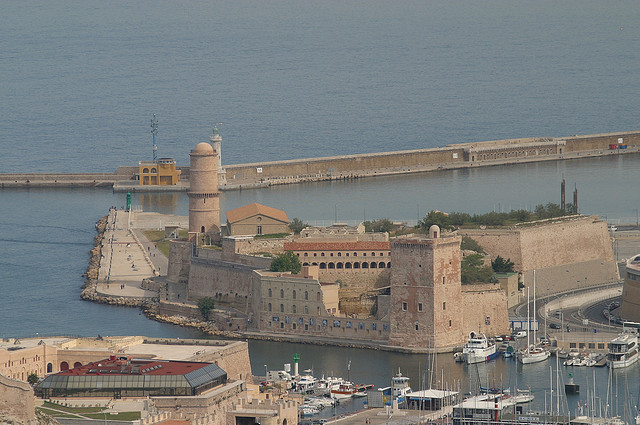 Fort St Jean / Fort St Nicholas – Photo : bolzlimacher
The Organisation of World Heritage Cities, (OWHC) summarises the Marseille Forum event, “Marseille Forum on the Value of Heritage for society and the social value of heritage,” held in September this year as follows:

“…The Marseille Forum was organised by the city of Marseille (Ville de Marseilles), its region (Provence Alpes Côte d’Azur Région) , the Council of Europe, and the European Union to bring together the states parties to the Faro Convention on the Value of Cultural Heritage for Society (2005) in order to draw the first conclusions and to follow through with it.
The city of Marseille was chosen for the implementation of the Faro Convention based on an original concept of heritage tours inviting the local population to rediscover, by walking with a guide, the local heritage.
The theme of this meeting, “The social value of heritage or the value of heritage for society”, promoted the idea of heritage as a factor of stability and of continuity, a resource to be exploited for and by the citizens in order to help them to reinforce social cohesion in its diversity, to improve their quality of life and to expand democratic participation…”

Balades Urbaines Capitales (Urban Capital Walks) are the result of Culture Pilot heritage programs within the overall Marseille-Provence European City of Culture 2013 (MP2013) program.
As stated by MP2013,
“…These walks provide a fresh perspective on the urban patrimony and the hidden riches of the city through encounters with residents and accounts of the secret histories of their neighbourhoods. Conceived by tourism and culture organisers with the help of residents, these walks are for everybody interested in unique events and human adventures…” ​Gare de Marseille-Saint-Charles [source] The Urban Framework of Marseilles, its Key Heritage Elements and Multi-Modal transport system.
Marseilles’ main thoroughfare, the wide boulevard called the Canebière, stretches eastward from the Vieux Port to the Réformés quarter.
The main commercial centre of the city intersects with the Canebière at rue St Ferréol and the Centre Bourse.
The centre now has several pedestrianised zones, including rue St Ferréol, Cours Julien, the Cours d’Estienne-d’Orves off the Vieux Port and the area around the Hôtel de Ville.
It can be argued that the principal heritage sites within the urban framework of Marseille relate to its coastal location, port heritage and related transport infrastructure as wall as its ecclesiastical sites.  Several of these sites and others appear in walking tours of the city as available on sites such as gpsmycity.com and marseille-tourisme.com. 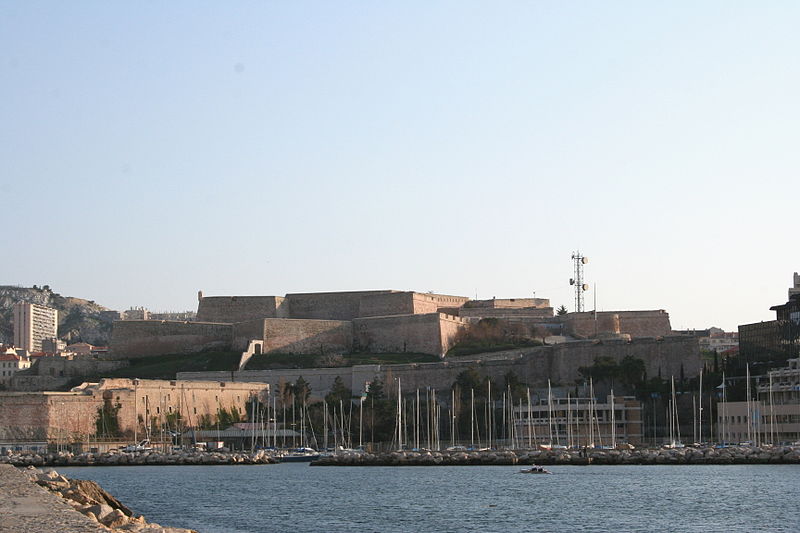 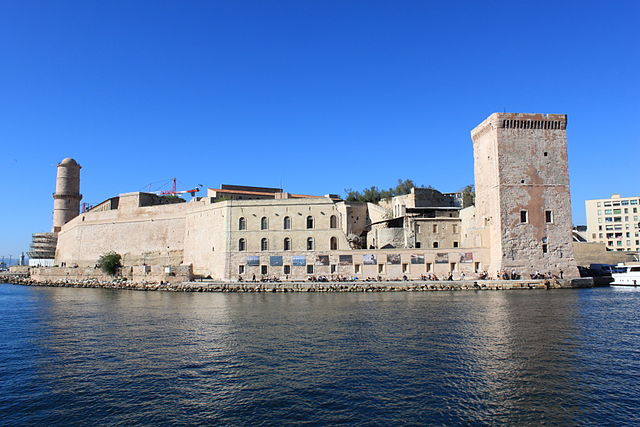 [source] Two large forts built in 1660 by Louis XIV flank the entrance to the Vieux Port, Fort Saint-Nicolas on the south side and Fort Saint-Jean on the north and from the sea to the North East, the presence of the Cathédrale de la Major flanks the Fort Saint-Jean.

[source] From the sea to the south west, beyond the Fort St Nicholas are the hills of the 7th arrondissement, dominated by the basilica of Notre-Dame-de-la-Garde. 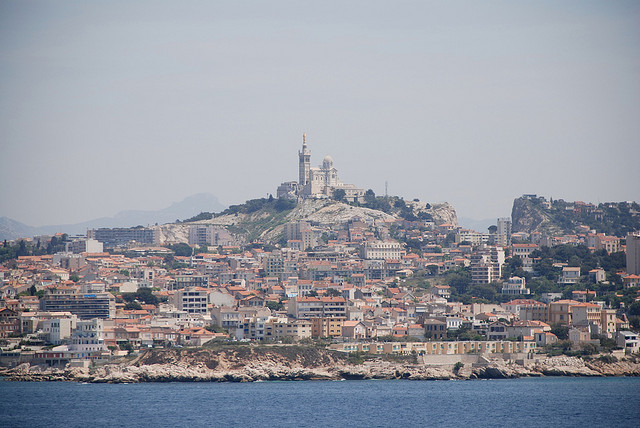 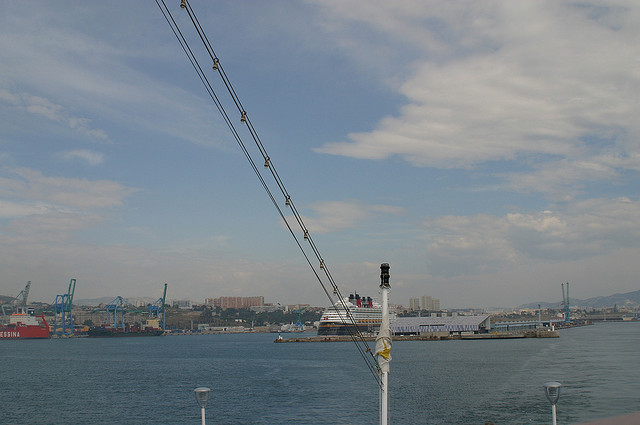 Gare Maritime – Photo: bolzlimacher
A ferry service operates between the two opposite quays of the Vieux Port. From 2011 a ferry shuttle services operate between the Vieux Port and Pointe Rouge; in 2013 it will also run to l’Estaque. There are also ferry services and boat trips available from the Vieux Port to Frioul, the Calanques and Cassis.
Gare de Marseille Saint-Charles is the city’s main railway station and was designed in 1911 and opened in 1926. It is north of the Centre Bourse in the 1st arrondissement, a major TGV terminal making the city highly accessible from Paris and Lyon. Historically the station was once a key stage on the voyage to Africa and the Middle-East before flying became popular.
Built in a U-shape with a rooftop canopy on top of a plateau its two wings house arrivals and departures. The station was initially isolated from the town until a monumental staircase bordered by African and Middle-East inspired statues connected it to the city. 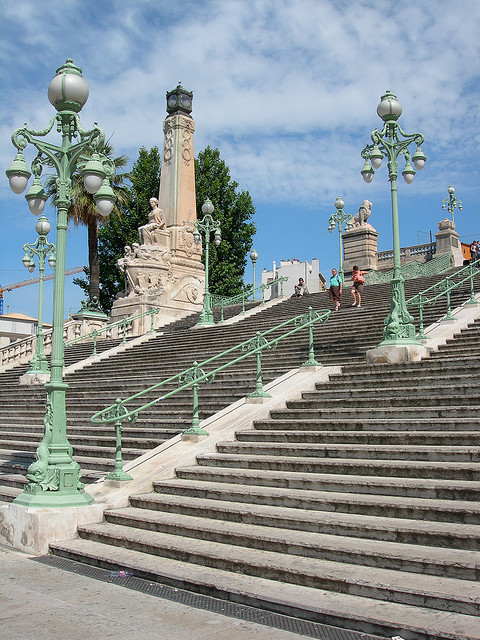 Le Grande Escalier, Gare de Marseille – photo: The Crypt
A first extension was opened after World War II. Buildings on the North side of it were destroyed and rebuilt to house the administration offices of the SNCF.
Multi-Modal Transport System
At the end of the 1990s a redevelopment project began with the opening of the Marseille underground and bus interchange as well as the arrival of the TGV Méditerranée. Since 2001 new underground parking and a tunnel allowed the train station to be renewed. A new hall, the Halle Honnorat, was created and hosts shops and services. Since 2001 station traffic has doubled.
Saint-Charles now has 14 terminal platforms and 4 tracks which run through.  A single track branch line links Saint-Charles to the harbour station of La Joliette.
There is now a long distance inter-city bus station adjacent to Saint-Charles but the displacement of the regional coach station has allowed a new pedestrian square to be created between the station and the Saint-Charles site of Aix-Marseille University. New pedestrian and retail space has also been created at the top of the monumental stairs.
To the south east in the 6th arrondissement is the Prefecture and the Place Castellane, an important bus and metro interchange.
The city is also served by the Marseille Métro train system and two lines of tramway opened in 2007. Three bus rapid transit lines are under construction to connect the Métro further.  A local bus network also serves the city and its suburbs, with 104 lines and 633 buses. 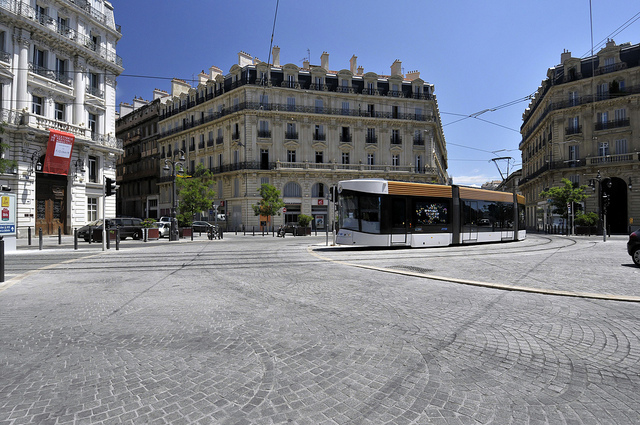 Tram de Marseille  Photo: WMUD [image source]
A bike-sharing service, Le vélo was also introduced in 2007 and an extensive network of motorways surrounds the city.
Author: Mary Bon
Mary is a RIBA accredited architectural researcher, with previous international experience in architectural practice. She has proven research and writing experience for both established clients and innovative start-ups in the construction industry worldwide. She is now based in France and orientated towards bridging the gap between landscape and architecture whilst supporting the causes of local, national and international built and natural heritage..

Previous Preparations start for bauma China 2014 – Applications from exhibitors now invited – online
Next Anyone got a (tonne of) nickel?