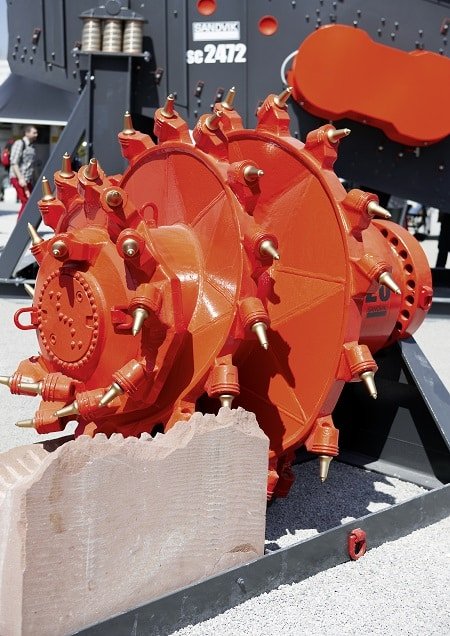 The Mining Association, affiliated in the German Engineering Federation, the VDMA, is again reporting falling sales. Nevertheless, it is optimistic that 2017 will bring a return to profit. As regards the global market, too, the analysts are expecting things to improve in 2016 and 2017. One reason for the cautious optimism is bauma, which takes place from April 11 to 17, 2016 in Munich.
Experience shows that many customers delay purchasing decisions until bauma, where they can first get an overview of the world market offering. Also as regards the rising number of customer inquiries, bauma is coming at a good time – an upturn would certainly do the sector a lot of good.
In 2014 worldwide exports of mining machinery were around €27.929 billion (2013: €31.087 bn), which is a fall of 10.2 percent. The biggest exporting nation, when it comes to mining machinery, was the US, with €7.694 bn (2013: €8.364 bn). The only country to report a rise in exports was China, where the figures rose from €3.940 bn to €4.071 bn. Singapore was in third place in the statistics for exporting nations, with €3.098 bn (€3.468 bn), because of its high volume of transshipments of mining machinery in Southeast Asia. The US thus has a 27.5 percent share of world exports of mining machinery, China has 14.6 percent and Singapore 11.1 percent, followed by Germany with 7.0 percent.
In Germany in the current year, machinery and plant worth €3.62 bn is being built. That’s three percent less than in the previous year. At least this reflects a much lower annual drop in sales, especially in view of the figures for 2014, when sales fell 29 percent as compared to 2013. For 2016, Dr. Michael Schulte Strathaus, Chairman of the Mining Association, fears that sales will “probably fall further, also by a single-figure percentage”.
With an export share of 94 percent, the sector expects sales of only €0.21 bn (- 7.8 percent) on the German domestic market this year, as compared to €3.41 bn (- 2.7 percent) abroad. Most of the exports (17 percent) go to the Mediterranean and the Middle East, and here Saudi-Arabia is the single biggest market, at almost nine percent. “Together with Iran, governments there want to reduce their dependency on oil,” says Schulte Strathaus, adding: “Mining is being developed as an additional mainstay.” The second-largest region for sales of German mining machinery is Latin America, which accounts for 11 percent, followed by China with eight percent, the US with seven percent and Russia with approximately five percent.
In the medium term the sector is cautiously optimistic about the future: An increase in customer inquiries is being reported. That indicates that the customers are again starting to look at buying new equipment. Also some companies are successfully opening up new areas of business, for example in hard-rock mining.
The VDMA Mining Association expects that demand for the metallic but also mineral raw materials extracted in hard-rock mining will increase substantially as a result of a global expansion in alternative methods of energy production.
Another reason for this cautious optimism, says Schulte Strathaus, is in the need for raw material producers to reduce costs: “In order to achieve profits in the current low-price environment, they have to increase the efficiency of their machinery and plant, and thereby reduce their costs.”
A global trend towards increasing safety also benefits the sector, he reports. Many countries, like China and Turkey, were busy making their coal mines safer. And as regards the technology required for this, the German mining industry – at least in underground mining – Germany is the global leader.
The sector seems therefore to be regaining optimism in time for bauma in Munich, and that is also being backed up by the registrations coming in from exhibitors in this area. Mareile Kästner, Exhibition Director of bauma, explains: “The current difficult situation in the sector is not being reflected in the registration figures for exhibitors at bauma. The interest from mining companies and manufacturers of mining products in exhibiting at bauma is still very high.” A list of all the exhibitors registered so far for the mining section is available online at http://exhibitors.bauma.de/en/exhibitors-products/mining (correct to December 2015).
Further information on bauma: www.bauma.de