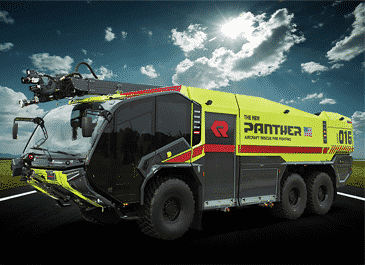 PANTHER is among the first aircraft rescue and firefighting trucks in North America to meet EPA Tier 4 Final emissions specifications.
Rosenbauer’s PANTHER is among the first aircraft rescue and firefighting vehicles in North America to meet EPA Tier 4 Final emissions, and is powered by a Volvo Penta TAD1672VE engine.
When Rosenbauer displays its new PANTHER aircraft rescue and firefighting (ARFF) vehicle at the Fire Department Instructors Conference (FDIC) in Indianapolis, it will be the first such truck in North America to be powered by a Volvo Penta EPA Tier 4 Final engine.
The Volvo Penta TAD1672VE engine is used for propulsion when the truck is moving and to power the fire pump when the truck is parked. It can also be used in a ‘pump-and-roll’ mode that drives and pumps at the same time.
Rosenbauer, a leading international manufacturer of firefighting equipment, and Volvo Penta have a history of collaboration. In 2015, Rosenbauer first introduced a European ARFF vehicle prototype with Volvo Penta power. That same model made its North America debut in 2016 at the 27th annual ARFF Working Group Conference powered by a Volvo D16 700HP US Tier 4 final compliant engine.
“We chose Volvo Penta for this new, North American prototype because it was the best platform for us globally,” says Steve Reedy, vice president and general manager of Rosenbauer America. “While we look at Tier 4 Final in the U.S., our colleagues in Europe are looking at their own applicable standards, and Volvo Penta offers the best platform to fit all of our markets.”
Power for mission critical applications
A reliable high-performance engine is a critical requirement for ARFF vehicles, which have approximately three minutes to get to the scene of an emergency. These emergencies could include fire suppression, hazard mitigation, evacuation and possible rescue of aircraft passengers and crew.
Volvo Penta recognizes the importance of minimizing downtime for mission critical applications such as Rosenbauer’s PANTHER. The manufacturer’s proven SCR after-treatment technology meets Tier 4 Final emission standards while eliminating the downtime for periodic regeneration required by other emission reduction technologies.
“Developing new, pioneering products and improving existing products is a source of pride for Volvo Penta, and the sparks that ignite new ideas are frequently customer-driven,” says Darren Tasker, vice president of industrial sales for Volvo Penta of the Americas. “When it comes to emissions compliance, our strategy is to stay well ahead of the curve in order to give our customers the time they need to plan and perfect their products.”
Designed to offer emergency airport crews safety, extinguishing capacity and maximum power, the PANTHER’s design and performance make it one of the most modern and versatile ARFF vehicles today. Rosenbauer will display the new truck at FDIC in Booth 5201, until April 29. Following the conference, the company will take the PANTHER on the road, performing live demos at airports from Missouri to Texas and at locations along both coasts.

Photo:  Rosenbauer’s PANTHER is among the first aircraft rescue and firefighting vehicles in North America to meet EPA Tier 4 Final emissions, and is powered by a Volvo Penta TAD1672VE engine.