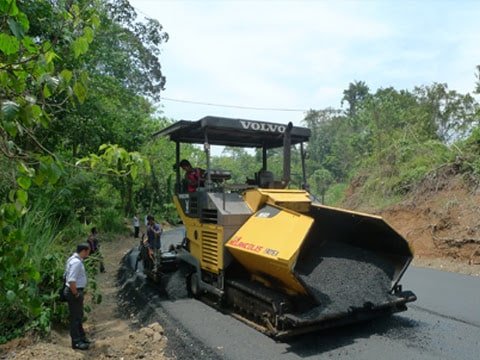 The Volvo ABG5820 paver is equipped with an electronically controlled travel drive offering the optimum prerequisites for a smooth and even mat.

A major expansion of the country’s road network is part of the Indonesian government’s plans to accelerate economic growth. Two Sumatran contractors are using Volvo Construction Equipment on one of the largest projects – the upgrade of the Trans-Sumatran Highway.
Many cities in Indonesia are set to benefit from the government’s Masterplan for Acceleration and Expansion of Indonesia’s Economic Development (MP3EI). The major initiative will see new roads built and existing roads upgraded to improve connections throughout the archipelago’s many islands.
One of the largest projects is the upgrading of the Trans-Sumatran Highway, the primary north-south road on what is the largest island in Indonesia. The Trans-Sumatran Highway stretches for over 2,500 km in total. Once complete, the upgraded road network will make travelling the length of the island from north to south and to all of the major coastal towns much quicker and more efficient. The aim is to boost the island’s palm oil and coal industries as well as increasing the productivity at ports to spur on economic activity across the island.
Two contractors, PT Rodateknindo Purajaya and PT Baniah Rahmat Utama are using a collection of machines from Volvo CE to work on their respective stretches. PT Rodateknindo Purajaya has the contract to handle approximately 50% of the upgrade work. Its contract for the Trans-Sumatran Highway is the largest of seven road projects the company is currently working on. The company has seven Volvo CE units on the job, including three compactors, two excavators, a paver and a wheel loader.
Ir Purwanto, owner of PT Rodateknindo Purajaya, said the company’s previous work at the local airport – again using Volvo machines – reinforced its experience in this type of work.
“We are working on both national and local government road projects, but our work on the Trans-Sumatran Highway is our biggest single project,” he said. “We were previously involved in the extension of the runway at Fatamwati Soekarno Airport in our home town of Bengkulu. Our success there set us up well for this latest work. We like machines from Volvo CE because of their fuel efficiency and the high levels of operator comfort they offer. With our asphalt paver we also really like the precision and quality this high spec machine delivers.”
The paver in question is an ABG5820 which has a standard 5 m paving width and an electronically-controlled independent travel drive fitted to each crawler unit. This system monitors track movement and controls the motor’s response accordingly, ensuring both straight line and fixed radius paving. The compactors on the project include two 11 t class single drum SD110 units; plus a 7 t class double drum DD70. Helping with earthmoving and materials handling on the job are a 21 t rated EC210B Prime excavator and an L90F wheel loader.
Long-term project
Elsewhere on the project, for the updating of the stretch in South Sumatra at the Bengkulu border, PT Baniah Rahmat Utama is the main contractor. The company presently has three G970 motor graders employed there and 10 compactors (five SD100DC units and five SD110 units). Plus the company is using an L120F wheel loader at a nearby asphalt and ready mix plant, which is supplying materials to the job site.
“The Trans-Sumatra Network is an ongoing project that we hope to play a large part in for many years to come,” explains Muhammad Teguh, managing director of PT Baniah Rahmat Utama. “For this, we need reliable equipment that helps us to meet our deadlines. Volvo CE equipment is high in quality and offers lower fuel consumption than other brands. For this reason, we envisage buying more Volvo machines as our workload continues to expand.”
PT Baniah Rahmat Utama was established in 2001 by Muhammad Teguh, a former equipment mechanic. His first Volvo CE purchase was an L45C wheel loader in 2004 which is still part of the company’s fleet today. Like PT Rodateknindo Purajaya, PT Baniah Rahmat Utama specializes in government projects, at both a local and national level.
All of the machines belonging to both PT Rodateknindo Purajaya and PT Baniah Rahmat Utama were purchased from Volvo CE’s dealer in Sumatra – PT Indotruck Utama (ITU). The dealer also maintains the machines through its network of mobile service technicians.