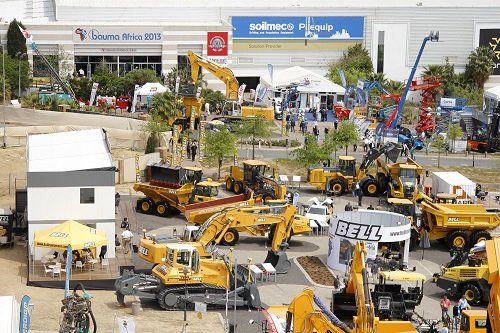 A good year before the start of the next bauma China, preparations are already underway for this event, which takes place from November 22 to 25, 2016 at the Shanghai New International Expo Centre (SNIEC). Companies interested in exhibiting can now download the application documents from: www.bauma-china.com/trade-fair/exhibitors/booking-stands/application-documents. The priority deadline for this, the eighth edition of the International Trade Fair for Construction Machinery, Building Material Machines, Mining Machines and Construction Vehicles, is February 15, 2016.
Rapid development
Since its premiere in 2002 bauma China has grown strongly. With 485 exhibitors and 32,068 visitors, the first event was relatively modest in size. But by 2006 those numbers had increased to more than 1,000 exhibitors and over 80,000 visitors. At the last event in 2014 the number of exhibitors exceeded the 3,000 mark for the first time; on the visitor side, too, a record was set, at just below 190,000. In terms of total space, also, there has been only one direction: bauma China started out with 41,000 square meters of exhibition space, but just two years later it covered over 100,000 square meters. And, since the 2012 event, it has been taking up the entire available space at the SNIEC.
Occupying all the space at the SNIEC
For bauma China 2016, too, i.e. for the third time in a row, the organizers are planning for 300,000 square meters of exhibition space, divided between 200,000 square meters indoors and 100,000 square meters on the outdoor exhibition area.
“Made in China 2025” drives growth
A central aim of the Chinese government is to drive economic growth: One way it is doing this is via the “Made in China 2025” strategy, developed back in early 2014 by the Ministry for Industry and Information Technology. This focuses on promoting intelligent manufacturing (Industry 4.0) and strengthening the competitiveness of Chinese companies. For international companies the investments associated with this initiative offer great potential; for Chinese companies, it is a chance to become even more competitive.
Top marks for the last event
The last bauma China in 2014 attracted a total of 3,098 exhibitors from 41 countries. That represents an increase of 14 percent as compared to 2012. And, despite the downwards trend in the market and the significant challenges confronting the sector, the number of visitors was 189,732 from 149 countries and regions. The proportion of visitors coming from countries outside China rose to 12 percent.
For further information, go to www.bauma-china.com