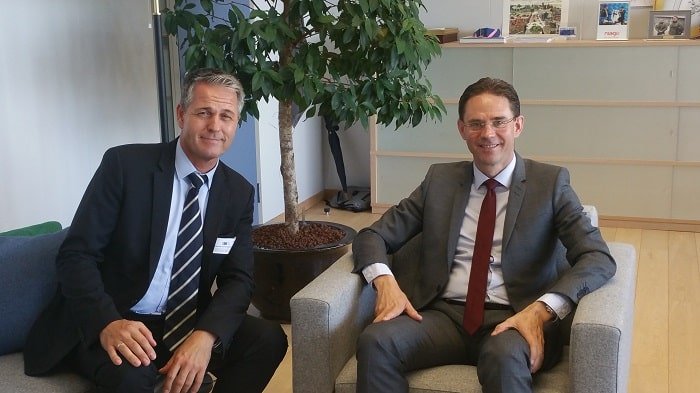 To help safeguard the competitiveness of the European industrial base, to create jobs and to instil new sustainable economic growth in Europe, the European manufacturing industry is requesting a holistic industrial policy strategy and action plan at EU level. In today’s meeting with Commission Vice-President Jyrki Katainen in Brussels, CECE President Bernd Holz emphasised to him how vital a coherent industrial policy could be for the future of construction equipment manufacturing in Europe. Amongst the relevant points Bernd Holz highlighted market surveillance, international trade and regulatory compliance. Vice-President Katainen confirmed Commission’s willingness and commitment to support EU industrial initiatives. Concluding the exchange Bernd Holz said: “I really appreciate the interest and the hands-on approach of Commissioner Katainen. I confirmed to him CECE’s readiness to deliver concrete examples of burdensome regulation, as well as new initiatives that we can put in place to reach the goal of 20% of EU GDP by industry.”
Upcoming EU Parliament Resolution

It is no secret that in the European Commission the initiative is an issue of controversy. Unanimous support, however, comes from the Member States expressed by the Competitiveness Council and endorsed by the Council Summit and from several MEPs from all political groups in the European Parliament. CECE is indeed contributing input to the upcoming Parliament resolution calling on the Commission to propose the industrial policy strategy, to be adopted at its next plenary session on July 5th.
Major fields of action