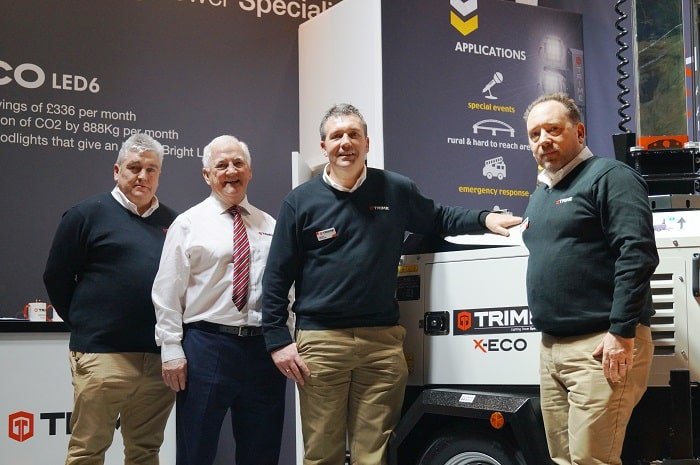 Trime (UK) Limited, the Cambridgeshire based manufacturer and supplier of advanced LED lighting towers, are preparing to exhibit at the forthcoming Hire Association Europe Trade Fair and Convention.
Held at Coventry’s Ricoh Arena, on the 11th and 12th of October, the Trime sales and marketing team will be on hand to explain the environmental and economic benefits of supplying LED lighting to the UK hire, construction, rail and events markets.
Incorporated in May 2016, Trime UK has swiftly developed into the market leader in the supply of engine driven LED lighting sets. A number of UK and European rental organisations, along with some leading independent hire firms, have opted to invest in Trime sets. The company is managed by Paul Hay and the group CEO is Ray Caulfield. Between these two highly experienced individuals, they boast a collective 50 years in the design and supply of lighting sets, primarily to the UK and European hire markets.
On show at the convention will be their flagship model, the X-ECO. Trime have calculated that the X-ECO uses approximately £336.00 less in fuel each month, which gives rise to a reduction in C02 output by around 888kg per month. Thirteen X-ECO’s can be loaded on one single truck, meaning potentially less traffic on the already busy UK road network.
The HAE EHA Trade Fair & Convention is expected to be their biggest convention to date. The new theme of CONNECT- DISCOVER- LEARN, for this year’s event promises to be at the forefront in tackling the key issues facing the hire industry including empowering women into the sector, R&D into future technologies and how the industry looks beyond Brexit.
Paul, Ray and the complete Trime team will be on hand during each day of the convention, ready to detail all the features and benefits of the X-ECO range.

Image: Wayne, Ray, Paul and Mark alongside an X-ECO