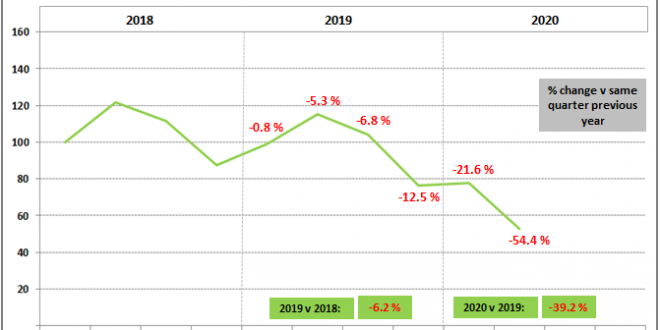 Retail sales of construction and earthmoving equipment in the UK market fell by 39% in the first six months of the year compared with the same period in 2019. Sales in the second quarter fell by 54%, reflecting the worst of the COVID crisis, after showing a 22% decline in Q1, compared with 2019. This is illustrated in the first graph below showing quarterly sales on an index basis from the construction equipment statistics exchange*, using Q1 2018 as 100.

The monthly pattern of sales in the second quarter of the year presents a more positive story. The decline in sales in June was 36% below 2019 levels, after following more significant falls of 74% in April and 54% in May. This clearly suggests now that the low point in new equipment sales due to the pandemic was reached in April, with sales just below 800 units. Recovery was underway in June, with sales reaching just over 2,000 units, as the return to work within the construction industry continues. The construction equipment statistics exchange also covers retail sales of equipment in the Republic of Ireland. This shows a 30% decline in sales in the first half of 2020, compared with 2019. Sales in Q1 were only 8% down on last years’ levels, but then fell by 51% in Q2.