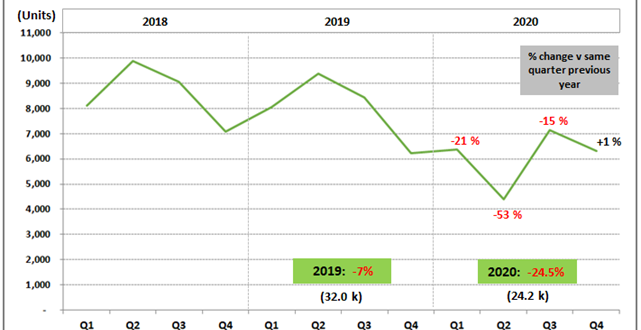 Retail sales of construction and earthmoving equipment continued to show a strong recovery at the end of 2020. Sales in December were 15% ahead of December 2019 levels, and this was sufficient to edge Q4 sales to 1% above the same quarter in 2019 (graph 1). Construction activity continued to recover in the second half of the year, and this supported improving demand for equipment sales.

In 2020 overall, sales of construction equipment ended up 24.5% below 2019 levels at just over 24,000 units for the year. While this is still a significant year-on-year decline due to Covid-19, it is less than feared earlier in the year when sales declined by 38% in the first half of the year, following the initial crash in March due to the pandemic.

The second chart (graph 2) shows a ranking of sales for the major equipment types, showing the size of the decline in 2020 compared with 2019. This highlights that the most popular equipment type, mini and midi excavators (up to 10 tonnes), saw stronger demand last year than all of the other equipment types. Sales of mini/midi excavators were only 5.5% below 2019 levels, after-sales in the last four months of the year overtook levels in the previous year. Strong demand from the house building market is reported to have been one of the key factors supporting demand for smaller machines. In contrast, sales of the other major equipment types were in a range from 28% to 57% below 2019 levels. 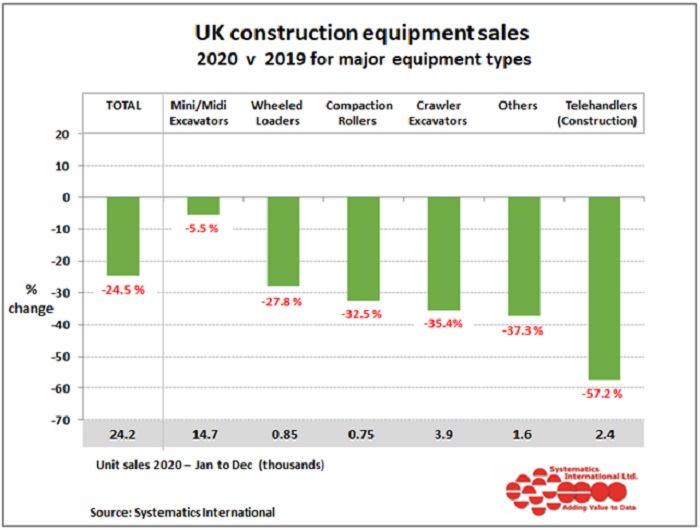 The construction equipment statistics exchange also covers sales on a regional basis in the UK and N Ireland. The map shows the percentage differences for sales in the main regions in 2020 compared with 2019. Sales in Wales, the North West, and the East Midlands were the strongest, in a range from only 14% to 17% below 2019 levels. At the other end of the scale, the weakest sales were in the North East, at over 40% below 2019 levels. 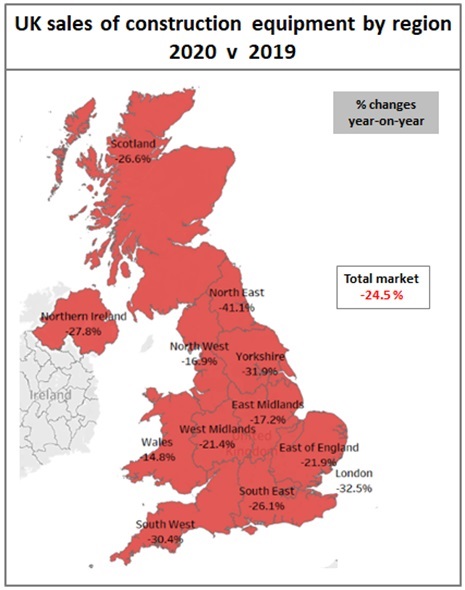 Sales in the Republic of Ireland are recorded separately, and after recovering in the second half of the year showed only a 14% decline on 2019 levels for the full year. Similar to the UK, mini/midi excavators were the best performing equipment type.