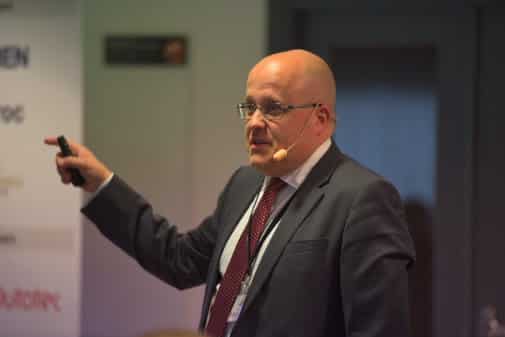 During the first day of Euro Mine Expo, Mikael Damberg, Swedish Minister for Industry and Innovation, agrees with Boliden’s CEO, Mikael Staffas, about the important role of mining in the conversion to reduced fossil emissions and more sustainable societies.

“The Nordic countries has a large part of the raw materials needed in today’s economy,”

says Mikael Damberg.
Mikael Damberg, Swedish Minister for Enterprise and Innovation, says he is happy to be in Sweden’s golden town when he talks at Euro Mine Expo.

says Mikael Damberg.
According to him, Northvolt’s battery factory, to be built in Skellefteå, is a good example of a new, sustainable transformation in the economy that will depend on minerals and metals.

“This is a social issue we need to focus on,”

says Mikael Damberg.
He claims to be optimistic and has never seen such a big interest in this industry sector:

“The debate is more about how mining is a part of modern society’s solutions, not part of its problems”.

According to him, Sweden has high ambitions in terms of carbon dioxide emissions and goes beyond the rest of the EU. Among other things, emissions from public transport is set to decrease by 70 percent by 2030. According to him, it will not be possible without electrification.

“We have said that we want to be one of the first fossil-free welfare states in the world”.

He believes that those countries who embrace that ambition will be stronger, but will also face challenges.

According to the minister, Europe in order to secure availability of raw materials, increased production is needed. In addition, Europe consumes 20 percent of the world’s raw materials, but produces only 5 percent.

“The Nordic region has a large part of the raw materials needed in today’s economy,”

says Mikael Damberg.
Boliden’s new president and CEO, Mikael Staffas, in his first appearance in Sweden since he entered the position as CEO, pointed out that the demand for base metals will remain high. Not least because modern technology needs them.

“Many people think we are only in this business to generate profit for our shareholders and maybe contribute to jobs locally. But the main reason we exist is to produce base metals that are needed in many aspects of life. That is also why there is a demand”,

says Mikael Staffas.
He believes that the answer to the climate challenge is not to mine less, but more base metals. According to him, their copper value chain Aitik-Rönnskär is the one that produces the lowest carbon dioxide emissions in the world per recovered unit.
In addition, he presented figures that showed the effectiveness of Boliden’s mining operations. A major part of this efficiency has, according to him, been achieved through the use of new technologies, developed by opening up their research and development facilities for new technology researched by other companies.
One example is that they no longer have foremen and delegated the responsibility, which means that employees can also take all the necessary decisions equipped with tablets that provide mobile access to an entire control room. Another example is tags that show where each employee is and give the opportunity to work alone with sustained security. For example, you do not have to work in pairs for safety. Other examples include data communication in 5G and driverless trucks.

“Volvo is spending their money in our mines to develop the technology. We are watching it closely how to run a mine without drivers”.

He points out that the reason for using driverless vehicles is not the one that many believe.

”What you really do not want in a mine is a fire. Normally, if a truck catches fire, we need to protect the driver by evacuating the driver from the truck. But the truck can be in a very unsuitable place where it can burn down all possible infrastructure. If you have a driverless truck that discovers that it has caught fire, it can commit suicide by getting to a place where the fire makes the least damage and burn down. It gives the opportunity to plan mines in a completely new way, because no driver safety needs to be taken into account”

says Mikael Staffas.
He also shared the example of ventilation, where new technology allows for “ventilation on demand” to provide proper ventilation where people and machines are located. In addition, Boliden started a pilot project to electrify the mining transports in Aitik by creating a 700 meter long trolley assist with contact lines where four trucks are connected to a pantograph on the roof. It is estimated to save over 800 cubic meters of diesel each year.

Previous Euro Mine Expo opens with trade fair, conference, open sessions and many of the major mining companies on site
Next How to Prevent Accidents: 5 Safety Best Practices That Can Help