Valparaiso, commonly known as Valpo, is the second largest city in Chile, and Gran Valparaiso (which includes Viña del Mar, Quilpué and Villa Alemana) is the third largest conurbation in the country, after Gran Concepcion and Gran Santiago. It is also the capital of the Valparaiso Province and Valparaiso Region, located 69.5 miles (111.8 km) northwest of the capital Santiago in the V Region. 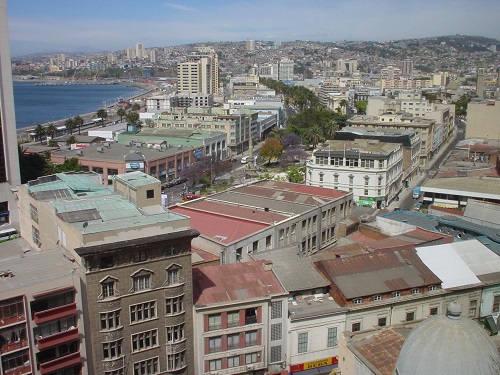 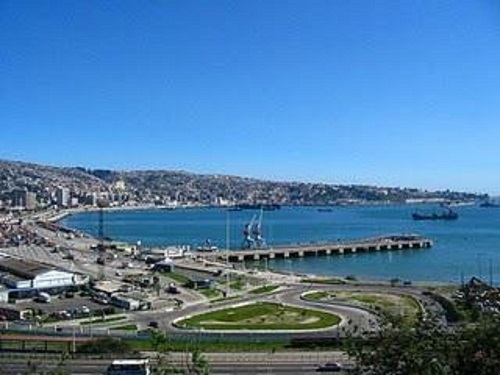 [Image Source] Pre – Independence
It is principally a seaport city first populated by the Changos and then Spanish explorers in 1536 who founded the port in 1542 for trade with Peru.
Iglesia La Matríz was built in 1658; Augustine and Franciscan religious orders from Europe embarked in the city and religious construction was followed by that of fortresses.
England recognised its importance as the principal port of South America as early as 1800. [Image Source]
Post – Independence
After independence in 1810 it became one of the most important ports on the Pacific coast of South America, becoming the principal harbour for the Chilean navy and opening up more to international trade. Around 1839-40, Valparaíso was granted independent administrative status as an Intendencia, and in 1842 it became the capital of the Province of Valparaíso, with fiscal warehouses and the Stock Exchange. This commercial centre and the associated warehouses lay in the main coastal area.
The city played an important geopolitical role in the late C19, when the city served as a major stopover for ships travelling between the Atlantic and Pacific oceans through the Straits of Magellan or around Cape Horn.
When the economic staple of the country changed from wheat to salpetre after independence and boats left for Alexandria in Egypt, the global age of this seaport city came about.

[Image Source]
The Consejo de Monumentos Nationales describes the time when its centre was planned and developed by European immigrants. Between 1847 and 1870, Valparaíso became a leading commercial and financial centre.
From 1848 to 1858 during the cosmopolitan golden age of the city it was known as ‘Little San Francisco’ or ‘The Jewel of the Pacific’ due to its importance supporting and supplying the California Gold Rush. At this time, the city was planned around three focal points, the seaport, the commercial centre and the Almendral beach area with farmhouses and small enterprises. In the 1840s and 1850s more warehouses were built. In 1852 a railway was built to the inner cities of the region and to Santiago.
Construction materials such as Californian timber and even Welsh slate found their way by ship to Valparaiso as useful ballast for return journeys. Italian marble followed.
In the second half of the C19, the position of Valparaíso was further strengthened as the main harbour and commercial centre of the country, and its activities included mining activities. The country’s main economic resource shifted from wheat to saltpetre. Following this development, the town was articulated into areas characterised by their principal activities, such as commerce, harbour, industry, and business.
UNESCO states that the Historic Quarter of the Seaport City of Valparaiso,
“…is an exceptional testimony to the early phase of globalisation in the late C19 when it became the leading merchant port on the sea routes of the Pacific coast of South America.” 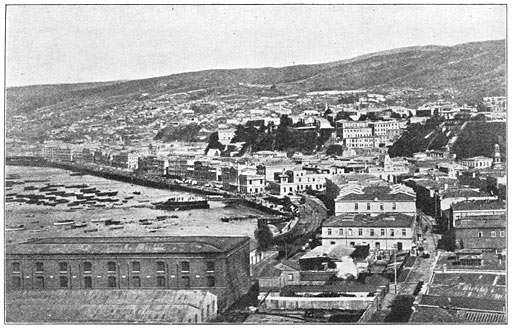 [Image Source]
The city thus expanded and was connected to Santiago by the Cintura highway by Fermin Vivaceta some 100m above the sea in 1872.
In 1910, the 100th anniversary of the national independence gave a further incentive to erect significant public, commercial, and private buildings until a combination of factors, the weakening demand for salpetre, the first world war and the opening of the Panama Canal in 1914 led to a consequent reduction in shipping from it, a situation deepened by the world crisis of 1929.
Since the 1930s there have been no fundamental construction works in Valparaiso, all work being related to maintenance, repair, renovation, complementary and organisational works to allow it to adapt to changes in the maritime world such as the intensive use of containers.
Throughout Gran Valparaiso it is a similar story, exemplified by the 1930s Cap Ducal restaurant in Vina del Mar. 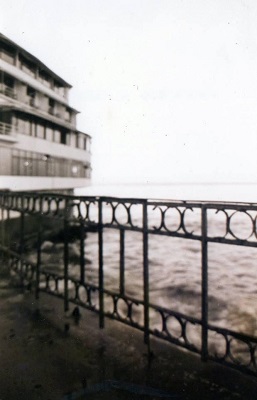 Photo Credit: Cap Ducal, Vina del Mar
Author’s own photo: Mary Bon 1995
Recent times
Now it is one of Chile’s most important seaports and its principal container port and passenger terminal is one of the most significant on the Pacific coast of South America. It is however envisaged to become the largest in the near future through significant waterfront development. ​
[Image Source] Beyond this it is an increasingly important cultural centre in the Southeast Pacific, keen to develop its commercial port activities alongside heritage orientated and nautically orientated local and touristic activities and concerns, particularly at El Puerto Deportivo Baron.

​[Image Source]
The Puerto Baron project, following other international and national precedents, aims to align the wishes of the port community and citizens with the opening up and integration of the sea front with the rest of the city whilst respecting heritage concerns, including the nautical community of Puerto Baron. The extent to which this will be the case once complete, remains a source of contention and on-going concern.
Part 2 you find: here
Autor: Mary Bon
Mary is a RIBA accredited architectural researcher, with previous international experience in architectural practice. She has proven research and writing experience for both established clients and innovative start-ups in the construction industry worldwide. She is now based in France and orientated towards bridging the gap between landscape and architecture whilst supporting the causes of local, national and international built and natural heritage.