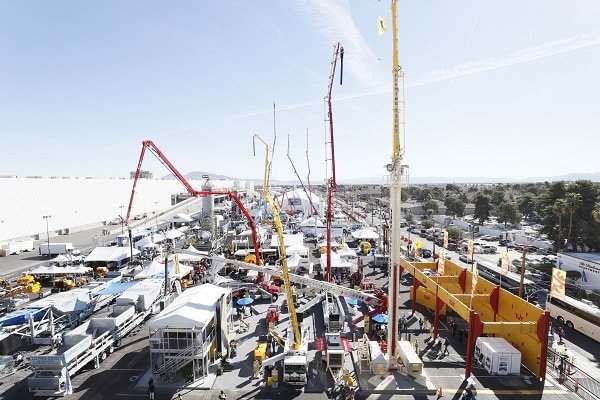 In a CONEXPO-CON/AGG first, Dave Turin, host of Discovery’s Gold Rush, hosted a jobsite safety wearables fashion show at CONEXPO-CON/AGG, featuring technologies poised to revolutionize jobsite safety and productivity.
The event was part of the show’s new Tech Experience, a 75,000-square foot, immersive, future-forward showcase that allows visitors to see what’s possible tomorrow, today. The Wearables showcase featured products from Illumagear, Caterpillar, Note Vault, Strongarm, Night Runner, HD Electric Company and others.
A central theme of CONEXPO-CON/AGG 2017 involves optimizing equipment technologies for productivity. Amid pressures to reduce cost and maximize shrinking margins, construction industry professionals are looking for cost-effective ways to reduce downtime from injury or accident. Recent advances in wearable technology may be the solution.
Technologies on display at the show focused on everything from data aggregation tools to embedded sensors and hands-free device controls. But some of the most compelling technologies focus on providing real-time feedback to wearers about exposure to dangerous conditions, such as toxic gas, unsafe altitudes and too-heavy loads.
“Back injuries are the number one injury in the US with up to 10 percent of the workforce impacted each year,” Turin said.
The U.S. Bureau of Labor Statistics estimates that about 16 percent of the nation’s 1.2 million workplace injuries in 2015 were back injuries, and 31 percent were musculoskeletal disorder resulting from overexertion in lifting.
That’s why technologies from Caterpillar and Eni seek to send warning signals to workers in real time to prevent illness or injury quickly and effectively. These innovations range from in-shoe pressure sensors to updated workbelts that alert wearers when they overexert themselves.
Similarly, StrongArm Tech introduced its new V22 ErgoSkeleton, a lift-assist device designed for heavy lifting and carrying that physically shift weight from weak muscles to strong ones when users are not displaying proper form.
Other wearable developers are focused on simplified and synchronized communications, such as the new Red Point Positioning Real Time Location and Navigation Vest which shortens response time in case of an emergency and alerts wearers when they’ve moved outside of safety boundaries; Myo Gesture Control, which allows workers to communicate with their device via headset and hand gestures; and Note Valut that streamlines project communications to alert full project staff in case of an emergency or danger in a matter of minutes.
The fashion show, sponsored by Polydeck Screen Corporation, draws attention to a burgeoning technology market in construction, which has garnered investment from both industry and non-industry innovators, including Massachusetts Institute of Technology, Levi’s, Honeywell and Google.