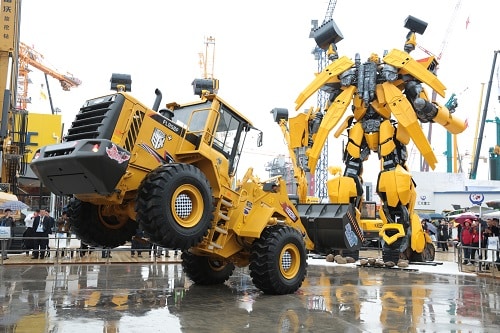 The four days of bauma China 2014, the 7th International Trade Fair for Construction Machinery, Building Material Machines, Construction Vehicles and Equipment, between November 25 and 28, were another resounding success at the Shanghai New International Expo Centre (SNIEC).
Despite the downturn in the market and the severe challenges facing the industry, bauma China still attracted 191,000 visitors (2012: 180,000) from 149 countries and regions. International buyers in particular were strongly represented at bauma China: their numbers rose by 12 percent. Eugen Egetenmeir, Managing Director of Messe München, was very impressed by the visitors’ enthusiasm: “After twelve years of development of bauma China, this show is now not only a platform for product presentation, but also a grand industry party for communication and cooperation for further growth.” Li Fangyu, VP Marketing China from Volvo Construction Equipment, spoke highly of the show: “bauma China 2014 is taking place in the midst of a recession in the construction machinery market. However, judging by the exhibitors and VIP customers we met here, the trade show is very encouraging. At such times, bauma China is giving us vitality, hope and spirit.”
After China, the top ten visitor countries and regions abroad were Russia, Korea, Japan, India, Malaysia, Thailand, Singapore, Taiwan, Hong Kong and Indonesia – in that order. “bauma China remains a must in our event calendar, on a local level as well as on an international level, as we have customers from South-East Asia, India, the Middle East, South America, Africa and Russia,” commented Ulrich Reichert, CEO of Wirtgen China.
bauma China once again occupied all of the exhibition space – a total of 300,000 square meters – at the Shanghai New International Expo Centre. This year’s show gathered 3,104 exhibitors from 41 countries (2012: 2,718 exhibitors from 38 countries), which is an increase of 14 percent compared to two years ago. Dr. Sun Changjun, Vice President of Zoomlion, pointed out: “bauma China is the biggest and the most important construction machinery trade show in China. It attracts leading construction machinery manufacturers from all around the world. It is significant to the industry and well-known among the industry professionals.”
Taking part in bauma China 2014 were 2,097 Chinese exhibitors. Here they presented to the world their key products and standards of excellence. Exhibitors from outside China also featured strongly at the show, and interest in their innovations and advanced technologies was high. This year there was a further rise in the number of international exhibitors. After China, the top five exhibitor countries were Germany, USA, Italy, Korea and Japan. bauma China also featured nine national pavilions, from Austria, Finland, Germany, Italy, Korea, Spain, Turkey, UK and the USA.
This year, for the first time, a business matchmaking system was implemented at bauma China to facilitate contacts between exhibitors and visitors. Visitors were able to search detailed information the exhibitors had posted in the system, and thus target those exhibitors they were specifically interested in. Hundreds of advance contacts were made in this way and meetings arranged for the show.
The next bauma China takes place at the Shanghai New International Expo Centre from November 22 to 25, 2016.