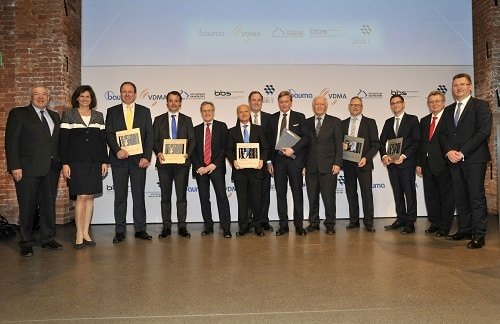 Munich, 10 April 2016 – A ceremony was held at which six companies and research institutions received bauma Innovation Awards. The awards are presented at three-year intervals, and the ceremony is always held in Munich, at the World’s Leading Trade Fair for Construction Machinery, Building Material Machines, Mining Machines, Construction Vehicles and Construction Equipment.

The Bavarian Minister of Economics, Ilse Aigner, praised the award winners and all participating companies, emphasising that the bauma Innovation Award “reflects the innovative strength of the construction equipment, building material and mining industries, both in Germany and internationally. Not only,” she continued, “does it show the things which are technically feasible, but it also gives us a glimpse of the future.” This year’s awards were given to the following companies:

The award competition has been attracting rising interest among foreign companies, too, said Johann Sailer, Chairman of the German Association of Construction and Building Material Machine Manufacturers, which forms part of VDMA (the German Machinery & Plant Manufacturers’ Association). Almost half of all applications apparently came from international companies. The award, said Sailer, sets signals for the entire industry, and the world’s leading trade fair, bauma, is an ideal platform for this purpose. He described the trade fair as “the absolute highlight” of the industry – an event which radiates an “immense charisma throughout the world”.
Bavaria’s Minister of Economics, Aigner, emphasised the significance of the award for the economy: “The winners we honour today have understood the signs of the times, and their innovations contribute actively to sustainable economic developments which are also highly practical.” The Minister referred to mechanical engineering as Germany’s and Bavaria’s flagship industry – the second biggest sector in Bavaria with a total of 220,000 employees. She believes that innovations are “central” to the German mechanical engineering industry, enabling it to maintain and expand its leading role.
The winner in the Machinery category was Kramer-Werke GmbH. The company received the award for developing its fully electric four-wheel-drive wheel loader 5055e. Being emission-free, the machine is ideally suited for use in buildings and tunnels, in particular. There is no longer any need for costly ventilation or exhaust gas removal. Its drive and hydraulics are each powered by an electric engine. Moreover, the engine for the hydraulic component only delivers the amount of power that is actually required at any one time. Since the wheel loader has an extremely low noise level, it can easily be used in noise-sensitive areas. Also, the electric engines are largely free from wear and tear, so that maintenance costs are lower than for conventional machines.
In the Components category the award was given to IMKO GmbH. The company received this award for developing its Sono water-cement analyser, a hand-held measuring device for the fast, safe and trouble-free analysis of the water content in fresh concrete. The user simply enters the parameters of the concrete and dips the analyser, which is fixed to a pole, in a bucket of concrete. The display then shows the relevant water content. There is no longer any need for long waiting times, as for instance with the Darr method which is currently still the most common one. This prevents any premature hardening of concrete and therefore increases the quality and lifetime of concrete structures.
Another category was Construction Process/Construction Work, where the award went to Leonhard Weiss GmbH & Co. KG, honouring a pilot project in which the dilapidated surface of a steel bridge was renovated with relatively little effort. It involved applying a synthetic resin adhesive to the previously repaired steel plate, which forms the road surface, and then scattering bauxite grit onto it. Next, a very close reinforcement mesh was applied, as well as a special high-strength concrete, developed by Contec International. The concrete coat, which is about 6 cm in thickness, is closely bonded to the steel plate via the grit, creating a totally new and far more resilient road surface. This method is a very fast and cost-effective way to mend dilapidated steel bridges and also to increase the load-bearing capacity of bridges in general.
In the Research category the award was given to the Dept. of Construction Machinery Technology of the Technical University of Dresden for its current research project on the 3D printing of concrete. All previous efforts to make such methods practicable had primarily focused on manufacturing specially customised concrete parts at production facilities. The scientists from Dresden, on the other hand, wanted to take 3D printing directly to the construction site, while also using existing machinery as the basis for their new method. At the same time, they wanted to ensure that the machines could continue to be used for their original purposes. It involved developing robotic machinery for use within a large space as well as a print head that could apply fast-curing concrete in layers, thus eventually creating entire buildings. This may revolutionise not only construction processes, but also designs.
Two companies received awards in the Design category. Mecalac was honoured for its new generation of mobile diggers, while the Technical University of Dresden and several companies cooperating under the so-called Concept Cluster were awarded for their jointly developed driver’s cab, called Genius Cab. The new mobile digger from Mecalac has a design that radiates not only power and robustness, but also dynamism and considerable value, said the jury in their judgement. The jury also made special mention of the successful way in which the rotatable upper carriage is integrated into the undercarriage. It was a good example, they said, of the way technical progress can be combined with design. The award-winning Genius Cab was described by the jury as a successful symbiosis of engineering and design which gives the viewer a feeling of safety and strength. Its unique features – the panelling elements and the glass cockpit with its faceted windows – show how design can support brand development.
Further information on the Innovation Award is available at:
http://www.bauma-innovationspreis.de/en/