Civil engineering construction will continue to pave the way for the development of the Bulgarian construction market in the next five years. In fact, from a share as a proportion of overall construction output of less than one-third in 2007, the figure reached 59% in 2014. This will continue to be the case, given the numerous civil engineering projects being developed for the 2014-2020 budgeting period of the EU funded operational programmes.
According to a new report entitled “Construction sector in Bulgaria 2015 – Development forecasts for 2015-2020” published by the analytical and research company PMR, after what now seems to be a period of post-crisis stabilisation, the second half of 2014 and early 2015 suggest that positive growth rates and outlooks are finally returning to the construction market in Bulgaria. However, the return of growth does not mean that the outstanding pre-crisis level will be matched in the near future, particularly with regard to residential and non-residential construction. Given the scarce investor base, most of the activities on the construction market are highly dependent on public procurements, and EU funds in particular. 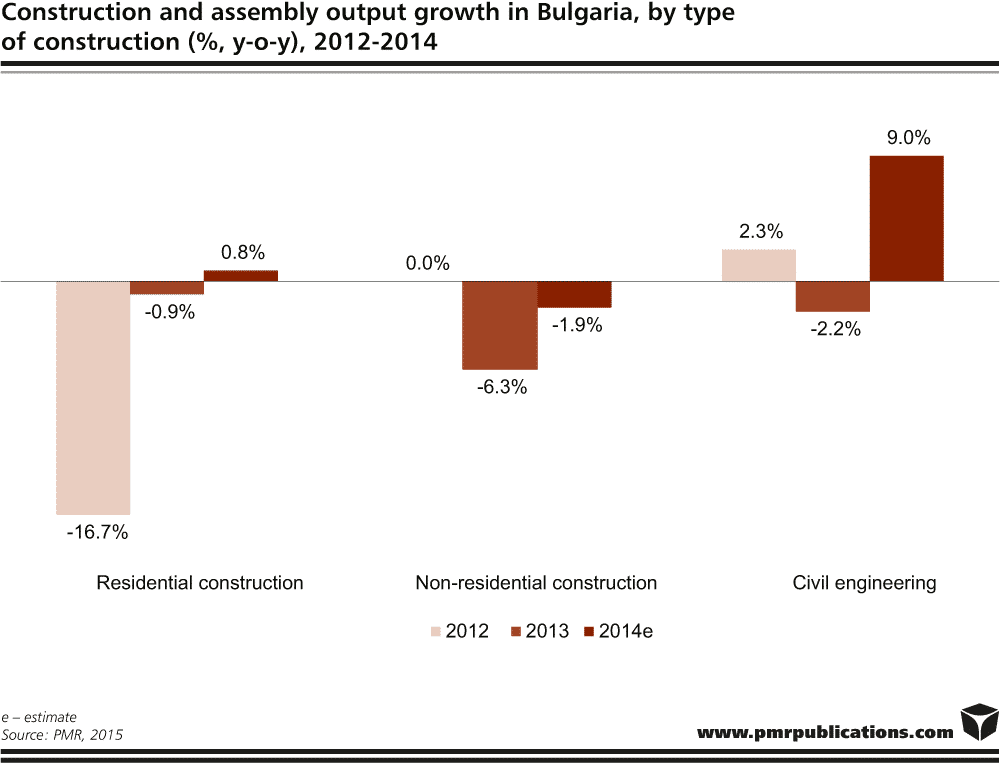 In 2015, as the final year of the 2007-2013 Operational Programmes, a great deal of projects should come to an end, and this means that engineering construction will ensure growth on the overall construction market. Moreover, after a decline of more than five years, growth has finally returned to the residential construction market. In addition, an increase was registered in data for building permits as well as buildings commenced.

Pressure on the demand side and increasing price levels should also yield a further increase in activity on the residential and the non-residential construction markets from the second half of 2015 onwards. This will probably result, initially, in an even greater increase in the number of previously frozen projects, particularly in offices and retail buildings, resumed.
Reductions in mortgage interest rates are also prompting an increase in interest in purchasing property as an investment. Furthermore, the recently achieved equilibrium on the demand/supply side of the residential market is likely to cause the return of extensive multifamily projects, along with upmarket individual housing projects, particularly on the coast. Although there have been some upward price corrections, price levels in Bulgaria are still far more attractive for foreigners, who see the country as a destination for a second home. However, no significant increase in interest on the part of foreigners who want to purchase a second/vacation home in Bulgaria is expected before the second half of 2016, mostly because of the overall socio-economic and political situation throughout Europe, and the Ukraine crisis in particular.
As in the residential construction market, the non-residential segment lacks large-scale project developments in favour of smaller-scale projects. In some instances, this has been defined as a maturing process given that an increasing number of new projects in both sectors are focused on very low risk developments, unlike the big scale projects, which had dominated previously. In the past two years, more activity was notable from previously frozen projects and it is these projects that make up most of the current developments, since there are still no new major projects planned.
Unlike the other parts of the non-residential sector, industrial and warehouse construction is far more promising. Pharmaceutical companies, companies from the automotive industry and companies producing electrical equipment had the biggest impact on new developments until 2015.