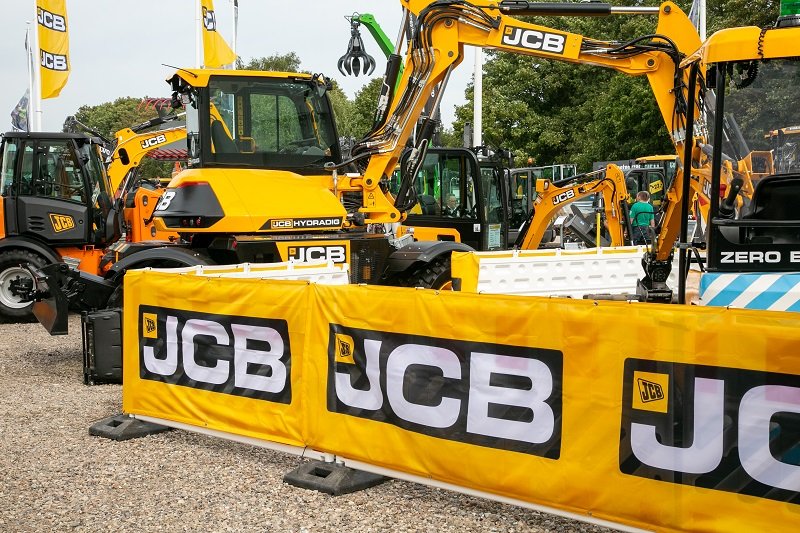 Complete closure slows down car traffic on the A7 in the north, but not the 64th edition of NordBau!

(Neumünster) The 64th edition of NordBau ended successfully in the evening of Sunday, 15th September 2019. Despite the complete closure of the A7 motorway due to construction work on the “Hamburger Deckel”, interested parties were not deterred from visiting the largest compact exhibition for construction in Northern Europe: 836 exhibitors from 13 countries were delighted to have about 62,600 visitors!
What was already apparent at the opening of the 64th edition of NordBau, with numerous celebrities from politics, business and the industry, continued seamlessly over the following days of the exhibition: the positive mood due to a stable order situation in the construction industry, combined with the will to move forward through future-oriented projects like the Fehmarnbelt crossing through an 18-kilometer immersed tunnel, for example. The positive spirit of optimism was not only conveyed by the exhibitors but was equally reflected in the full exhibition hall and in the numerous trade fair visitors in attendance. In short, the mood during the 64th edition of NordBau could not have been better! Many exhibitors highlighted the high level of expertise of the visitors.
KNOWLEDGE creates Living spaces: The focal points of the 64th edition of NordBau set important accents and hit the spirit of the times
At the opening of the 64th edition of NordBau, the Prime Minister of Schleswig-Holstein, Daniel Günther, and the Lord Mayor of the city Neumünster, Dr. Olaf Tauras, met for the first time with the representatives of the Scandinavian countries; the Ambassador of the Republic of Finland, Anne Sipiläinen; the Ambassador of Denmark, Friis Arne Petersen; and the Norwegian Honorary Consul, Detlef Palm, and discussed the economic and cultural opportunities that the growing Baltic Sea region brings to the people of Northern Europe. Previously in a keynote speech, the Honorary Consul of Finland who is equally the CEO of HanseBelt Initiativkreis, Bernd Jorkisch, emphasized the importance of the largest North European construction project, the Fehmarnbelt crossing, for the whole of Europe and its connections to the economic routes to Asia and Eastern Europe.
Small machines, Large machines – everything for the construction industry!
On the 69,000 square meter outdoor area north and south, the well-known machine manufacturers could be found, with their new machines and products. High-performance devices that are compact, energy-saving and flexible were at the top of the visitors’ wish list. In addition, many machine operators and construction managers relied on ease-of-use, occupational safety and service provided by the manufacturers. For craftsmen, the South open-air area was the meeting point for commercial vehicles, the large and small construction vans and vehicle equipment. The fact that commercial vehicles such as pickups, tippers and double cabins are in high demand at NordBau was also confirmed by the representative of Opel commercial vehicles from Rüsselsheim, Andreas Witte: “We are very satisfied with the 64th edition of NordBau. We were particularly in demand for the large commercial vehicles for craftsmen! We can’t complain about that!”

Step by step into a digital future!
During this year also, NordBau, in cooperation with the VDBUM (Association of the Construction Industry, Environmental and Mechanical Engineering e.V.), brought the “digital construction site Part 2” in the perspective of the visitors. Digitization poses major challenges for all those responsible for construction, mechanical engineering and the planning office. The digital transformation can be implemented for every company if the entire process is broken down into sub-requirements. The great interest in the vehicle simulators and the increasing need for discussion demonstrate how important it was and is to have once again brought this issue into perspective at the 64th edition of NordBau in 2019.
Fascination of the construction professions – who will build the construction site of tomorrow?
The shortage of skilled workers has been a concern for the construction trade and industry for some time. In cooperation with the Institute for Talent Development, IfT from Kiel and the Hamburg and Schleswig-Holstein Construction Industry Association, NordBau has been organizing the successful “nordjob-Bau-Tag” for eight years. This year, more than 1,400 students from Schleswig-Holstein, Hamburg, Lower Saxony and Mecklenburg-Western Pomerania took this opportunity to inform themselves and be inspired on the various craft training courses by the exhibitors at NordBau.
Overcoming the subsidy backlog, meeting new sports, and promoting social cohesion
“Sports facilities for the Future” – this topic has been addressed by the Schleswig-Holstein Regional Sports Association and the Technical University of Lübeck, in cooperation with the industry. More than 30 scientific papers and models by students of the Technical University of Lübeck (Lübeck Technische Hochschule) were presented and offered solutions for future-oriented sports facilities. The funds provided by the Schleswig-Holstein Regional Sports Association and the state of Schleswig-Holstein are to be used in this area for the sustainability and modernization of sports facilities. In addition, issues such as inclusion, integration and migration are also to be integrated. Examples include models of a standing surf wave, a boulevard, a pump track for mountain bikes.

Smart, energy efficient and safe home living
Under the motto: “Designing living spaces and SmartHome for the home”, property owners and housing associations were able to discover the latest technology. Almost everyone today knows that the advancing digitization does not stop at our doorstep, but many people are unsure how to approach the issues of burglary protection, energy efficiency and digital comfort. In Hall 2, not only were numerous companies represented by their experts, there was equally a SmartHome configurator, with which each visitor could easily determine their own real costs individually.
Large number of visitors at specialist presentations and seminars
During this year’s NordBau, 4,500 participants attended more than 50 specialist congresses and seminars organized by trade associations, municipalities and institutions. More than half of these conferences are recognized as further training workshops by the Schleswig-Holstein Chamber of Architects and Engineers. This year meetings were held to bring new target audiences to the industry. With this, NordBau once again succeeded in being the information and exchange platform for the entire construction industry in the North.
Figures, dates and facts
On the 69,000 square meters of open-air grounds and over 20,000 square meters of hall space, with 836 exhibitors from 13 countries, NordBau impressively demonstrated its strength and position as the most important compact construction exhibition in Northern Europe and the entire Baltic Sea region. Since 1956, exhibitors have, via the NordBau, been able to reach trade visitors who attend this exhibition for professional reasons, as well as end customers (public and private builders). Thus, the exhibition has a high degree of acceptance and attraction for all those interested in construction, as well as those working in the construction industry. In addition, for over 40 years now, NordBau has been cooperating with its partner country Denmark, who sees the trade fair as the basis for the German and European market! More information, photos and videos about NordBau can be found online at: www.nordbau.de
The 65th edition of NordBau will take place from the 9th to 13th September 2020, at the Holstenhallen Exhibition Center in Neumünster.
Source: Nordbau Press