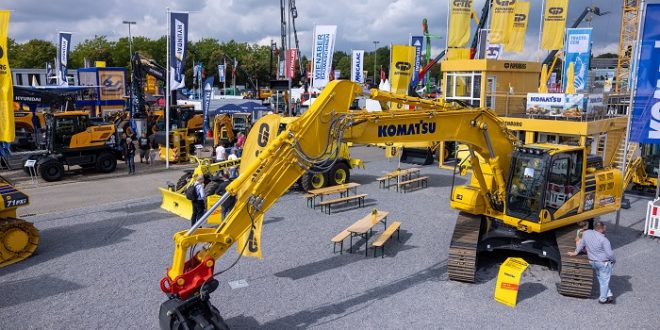 Together with exhibitors, the state government, the town and associations, NordBau manages a successful relaunch of the construction trade fair

(Neumünster) The 66th NordBau came to an end on Sunday evening, 12 September 2021, with many satisfied exhibitors and visitors. Building on last year’s trade exhibition Bau, the trade fair concept could be developed further in terms of hygiene and protection measures as well as the diverse coordination processes with all responsible parties. According to the motto: Safety first, but this year there must be a bit more – everyone pulled together and showed flexibility and optimism in the preparation.

“We were very pleased that the exhibitors and conference organisers together with us believed all along in what the state government had already signalled to us in the spring: A NordBau without visitor and space restrictions can be possible again, although with a lean but
effective hygiene concept,” says Dirk Iwersen, managing director of Holstenhallen.

Conferences and special topics meet with a great deal of interest

The 52 well-attended seminars showed that there is a great desire to meet in person. Despite the Corona requirements and the resulting reduction in capacity, professional development courses, general assemblies and awards ceremonies were very popular. Almost 3,000 participants took advantage of the training offered by the various associations and institutions. and proved that with prudence and a little discipline, conferences are feasible.

The major themes of this year’s NordBau also attracted interest from private builders, tradesmen, local authorities and industry. The contact point for e-mobility, for example, reported great demand for the products and solutions on offer. Commercial vehicles on the road in a sustainable manner – this is a decisive factor for more and more construction companies and municipal operators when purchasing new vehicles.

The special show “A second life for building materials – resource-saving construction in building construction and civil engineering” set an impressive focus that aroused curiosity and a desire for further information among numerous players from politics and business. Three startups in particular presenting their projects – new approaches in the circular economy, tiles made from construction waste and products made from hemp – illustrated to the visitors that new ways in recycling are possible and extremely worthy of support in order to realise a necessary trend reversal in the construction industry. The international CIRCuIT project, which was also presented in Hall 8 and explained by Hamburg’s Senator for Building, Dr Dorothee Stapelfeldt, at the opening of the fair, also contributed to this.

The outdoor area was hardly distinguishable from the last regular NordBau in 2019. It attracted many interested visitors who were finally once again able to try out, touch and enjoy the construction machines and equipment on display, touch them and make direct comparisons. For the first time, the world’s most powerful demolition robot was presented as well as the latest screening and demolition equipment. The exhibitors’ anticipation was already high in the run-up to the fair, and this positive mood could be felt on every day of the fair. And quite a few were also able to profit from the trade visitors’ eagerness to buy. One exhibitor of battery- and electric-powered construction equipment was particularly pleased with the good sales and interested customers – especially from the municipal sector.

The halls offered a wide range of tools, safety technology, interior finishing products, heating technology and IT. For example, a new active hearing protection was presented, which was in great demand among private and professional builders. Further developments in roof sealing, profiles and loft conversion and also solutions for the mechanical cleaning of ventilation systems aroused great interest among many builders, too.

66th NordBau – the meeting place for guests of honour, partners and young professionals.

The trade fair was accompanied by numerous representatives from the world of politics who made a significant contribution to the realisation of the trade fair in these special times. First and foremost, Minister President Daniel Günther, who was not only an early supporter of the trade fair concept with his staff, but also spoke to the exhibitors and guests present at the official opening. The Schleswig-Holstein Minister of Construction, Mrs. Sabine Sütterlin-Waack, both hosted the traditional Construction Minister’s Day and, as guest of honour, congratulated the Arbeitsgemeinschaft für zeitgemäßes Bauen e.V. (Working Group for Contemporary Building) on its 75th anniversary at a festive evening. At the recycling forum, the State Minister for the Environment Jan Philipp Albrecht emphasised the importance of this topic for the construction industry. In addition, the state secretaries of the interior, economy and environment ministries of the state of Schleswig-Holstein informed themselves about the respective focal topics during tours and contributed to seminars. Representatives of the state parliament and various parliamentary groups also showed great interest in the trend-setting topics of the construction trade fair.

Denmark has been an important partner of NordBau for 46 years now and this year again presented innovative building products from our neighbouring country in Hall 8 on a joint stand with 22 Danish companies under the umbrella of the Royal Danish Embassy in Berlin, the Royal Danish Consulate General in Hamburg and Dansk Byggeri. The Danish Ambassador from Berlin was also represented. Her Excellency, Ambassador Susanne Hyldelund, was the guest of honour at the opening event and confirmed also the importance of the partnership – the construction industry does not end at the national border.

Not across the national border, but beyond the edge of one’s own nose, several hundred students were able to inform themselves again about various training and career opportunities in the construction industry directly on site. The programme for recruiting young people for construction professions is a major concern for many associations and companies, and so they supported nordjob Bau again this year with great commitment and presented various future prospects in the construction industry in a highly illustrative manner. Many hurdles on the way to a suitable apprenticeship were removed and initial contacts were made. The first “Trainee Cup of Construction Machinery Simulators” of the Verband der Baubranche, Umwelt- und Maschinentechnik – VDBUM (Association of the Construction Industry, Environmental Technology and Mechanical Engineering) and the annual performance competition of painters and varnishers from Schleswig-Holstein also contributed to making the fascination of construction professions tangible.

NordBau was once again able to be a platform for exchange at all levels this year. Pandemic conditions and hygiene regulations were no obstacle for 556 well-prepared exhibitors to create interesting trade fair days for 26,100 visitors. Interest in construction machinery and equipment was particularly high on the open-air site, where many exhibitors were able to welcome significantly more trade visitors to their stands than in previous years. Together, the motto “Here we talk to each other” was once again filled with life.

The 67th NordBau will take place from 7 to 11 September 2022 at the Holstenhallen Neumünster exhibition centre.

Further information about NordBau, photos and videos can be found online at: www.nordbau.de

Previous Construction Equipment Economic Outlook: Stability is on the Horizon
Next CG Robinson takes delivery of the first HX210A Hyundai crawler excavator in the UK