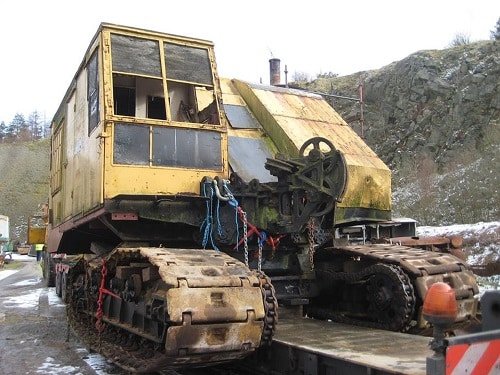 The CPA (Construction Plant-hire Association) is celebrating its 75th anniversary this year and in recognition of its history the CPA have made a donation to the Vintage Excavator Trust. The donation went towards the cost of the transportation of a 1957 Ruston Bucyrus excavator from the now closed Snibston Discovery Museum near Coalville in Leicestershire to the V.E.T’s home at Threlkeld Quarry in the heart of the Lake District.
The 54RB was originally built in 1957 for the Eastwell Iron Ore Company which, was a subsidiary of the Staveley Iron and Coal Co. Ltd.
The machine was eventually acquired by Peter Bennie Ltd. who, for a number of years, used it in dragline configuration at one of their facilities in Leicestershire. When Bennie no longer had a use for the machine it was donated to the Snibston Discovery Museum in Coalville in 1995.
The engine in the 54RB was a non-runner having sustained considerable damage when a con-rod broke though the crank case – as a result the 54RB remained as a static exhibit during its time at Snibston.
In 2014 the Snibston Discovery Museum closed its doors for good – consequently a new home had to be found for the excavator which was no mean task considering it weighed 65 imperial tons! Having a successful track record of preserving and restoring old rope excavators – and the space to operate them – the Vintage Excavator Trust expressed an interest in acquiring the machine and in December of last year an agreement was reached with Leicester County Council for the machine to be transferred to them at Threlkeld Quarry Near Keswick, in the Lake District, for restoration to working order. The 54RB would join a collection of over 80 excavators, in various states of repair at the V.E.T.
With no power unit it was going to be a bit of a challenge both financially and logistically to move the 54RB from its display area at Snibston so that it could be positioned on level ground for loading purposes. In January the CPA got wind of this project and made contact with the V.E.T to see what the association could do to help and made the offer of a donation towards transportation costs.
It was also in January a team from the V.E.T started to prepare the excavator by splitting the drive chains and removing the ‘A’ frame and roof mounted exhaust to allow it to pass safely under motorway bridges. For safety reasons the jib had already been removed by museum staff.
In late-February, V.E.T volunteers along with the assistance of Graham Lee, from the Stotfold Barn Railway, his two Mack recovery vehicles and operators, together with members of the Chasewater Valley Railway – the 65tons of static machinery was winched out of its resting place and into position for loading up. Having stood idle for 20 years it was a bit reluctant to move but with a lot of persuading, and hard work from the joint volunteer group, it eventually obliged!
Due to its sheer size and immobility (overall length 25’-0”, width across tracks 12’-6”, width over outside of cab 14’-6”, height 14’-0”) transportation using a beam trailer was necessary and the services of Paul Thorpe Haulage were engaged to make the move – the company also made a generous donation towards the restoration costs of the excavator.
George Chambers from the V.E.T said “Following a journey of over 200 miles on 24th February the machine arrived at a snow covered Threlkeld Quarry. Due to the restricted nature of the access into the quarry, which requires negotiating a very tight hairpin bend, considerable manoeuvring of the 28-metre-long tractor unit and trailer was required but with the help of a steerable 5 axle bogie, this was accomplished skilfully and without incident.!”
George added, “The V.E.T. fortunately has a replacement for the damaged V6 Paxman engine in the 54RB and work has already commenced to remove the old, damaged unit and fit the replacement. Once powered up our restoration team will be able to make an assessment of any other work which will be required to make the excavator fully operational again, although, initial, cursory, visual inspections are encouraging. Whilst not committed to a programme for the restoration, it is hoped to have the mighty 54RB ‘hitting the dirt’ sometime in 2017.”
George concluded, “Thanks to all who have already generously given their time voluntarily to the project and to the Construction Plant-hire Association and other corporate organisations which have supported it financially.”
CPA Director, Kevin Minton said, “We were delighted to be able to assist the V.E.T in moving the 54RB and we are looking forward to monitoring its progress. The machine is part of our construction plant heritage and its restoration back to a working machine is a worthy project. We wish them every success!”
The Vintage Excavator Trust is always pleased to welcome new members, whether they wish to become actively involved or simply have an interest in old excavators. It’s just £20 per year and for that you are able to attend the AGM, receive the V.E.T’s newsletter – the Navvy Driver – and will receive free entry for the trust’s Open Days. The next open day is planned for 21st and 22nd May. For membership details contact Pamela Beaumont, Membership Secretary on 01524 730161or Ian Hartland, Chairman on 01768 779202 or email threlkeldquarrymuseum@btconnect.com