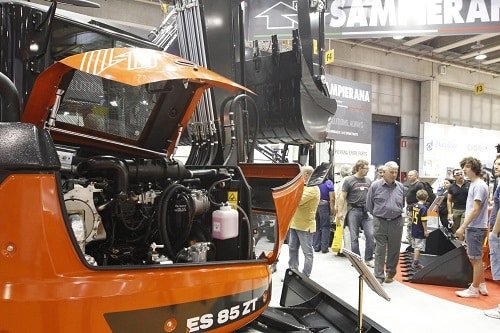 Run-up to the 30th SaMoTer at Veronafiere 22-25 February 2017 – Earth Moving Machinery: The "Compact" Sector in Italy is Gowing. Sales of Machinery-Excavators between January and July up by +24%

The specialists at SaMoTer 2017: Eurocomach-Sampierana, Ihimer, Kubota, Takeuchi and Yanmar and have already officially confirmed attendance as exhibitors at the earth moving, site and building machinery show at Veronafiere.
Verona, 17 November 2016 – Compact, efficient, ideal for work even on construction sites in the middle of traffic in large cities and lower pollution levels than ever: the “featherweight” category is driving the recovery in the earth moving machinery world. Mini-loaders and mini-excavators up to 6 tonnes continue to earn market shares on a global scale, improving from 15% of total sales in 2010 to 24% in 2015. This trend is also reflected in Italy, as evidenced by data from Veronafiere’s SaMoTer Outlook in collaboration with Prometeia and with the information input of Unacea.
Between January and July 2016, Italy posted sales of 3,935 mini-excavators, 24% more than in the same period last year. The wheel-mounted mini-loader segment also expanded, with 342 units sold (+44%), as well as track-laying mini-loaders with 286 units (+41%).
These important figures must in any case be viewed in context – such as the Italian earth-moving sector – which has lost up to 82% of its value since the beginning of the crisis in 2009.
Nonetheless, this is a positive sign for the sector, with a view to the 30th edition of SaMoTer, Italy’s most important trade fair dedicated to earth moving, site and building machinery scheduled at Veronafiere 22-25 February 2017 (www.samoter.it).
And the “mini” segment will be well represented at the coming SaMoTer event by Eurocomach-Sampierana, Ihimer, Kubota (E-Mac Group), Takeuchi (Midi Europe) and Yanmar – leading international brands that have already official announced their attendance as exhibitors.
Mini-excavators and mini-loaders respond increasingly well to the maintenance work requirements of highly-urbanised modern contexts such as those in Europe and the United States. Efficient machinery ensuring minimally invasive work, capable of operating in confined spaces and short-term construction sites. All this without forgetting sustainability: latest-generation machines can eliminate more than 90% of exhaust gas particulates compared to engines fitted before 1996.