Brussels – 15 January 2014
As of January 1, 2014 Eric Lepine, General Manager of Caterpillar France SAS in Grenoble, is presiding CECE, the Committee for European Construction Equipment, for the coming two years. Eric Lepine took over the presidency from Johann Sailer, who has been chairing the association during the last two years. The official handover took place in Paris in December on the occasion of the last CECE-Steering Group meeting of the year. 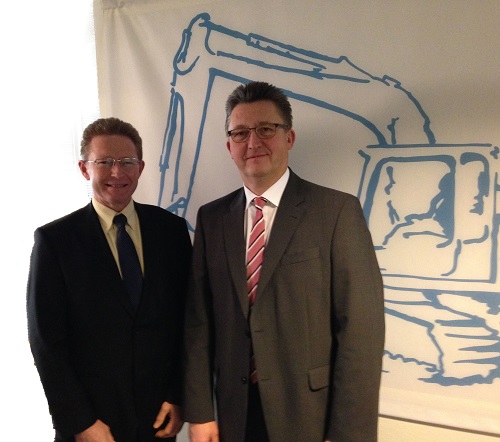 During his 26 years of experience in the industry, Eric Lepine has held various important positions at Caterpillar in different countries such as Belgium, Hungary, Poland, Russia, USA and UK before taking over the responsibility in Grenoble.
Lepine’s main goal for his presidency will be to ensure the implementation of the 10 Points listed in the CECE-CEMA Industry Manifesto, which was presented during the 2013 CECE summit in Brussels to the members of the European Parliament and the European Commission. Lepine believes that CECE should focus on three main priorities during his Presidency: Achieving a harmonisation of road safety requirements for non-road mobile machinery within Europe; ensuring that industry’s needs are duly taken into account within the current revision of the exhaust emission legislation and finally the association should work for the final approval of the market surveillance legislation review, currently stuck at the European Council level. He would continue and step up dialogue with decision makers in Brussels at all levels. “We will keep on promoting the idea of fair competition and free trade for all market players in Europe. What we have to avoid is non-needed complexity in laws and regulations”, Lepine describes his goals.
His deputy chairmen for the next two years are Christian Stryffeler, Executive Vice-President for the machine segment of Ammann AG and Giampiero Biglia, Business Director at CNH Industrial. Lepine is spokesman of 1,200 mainly medium-sized European construction equipment manufacturers from 14 countries. They are members of CECE via their national associations. The European construction equipment industry achieves a turnover of 25 billion Euros and employs 130,000 people.
Source: CECE

Previous SAMOTER 2014: Veronafiere and Industry Associations Together to Promote Earth-Moving and Site Machinery World-Wide
Next Hyundai at the 54th Annual Doe Show