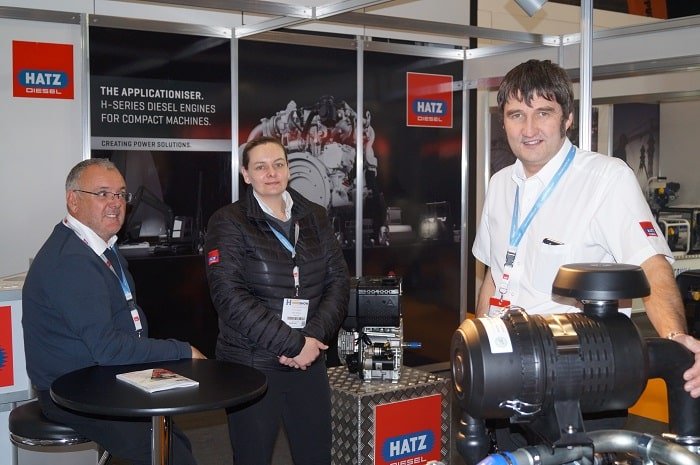 The Hatz GB team were extremely happy with both the quantity and quality of the visitors to their stand at the recent Executive Hire Show.
The company used the Show to present their latest innovations, the 3-cylinder 3H50T and 4-cylinder 4H50TIC engines. The 4H50TIC is 2-litre engine fitted with a turbocharged intercooler and the 3H50T is a new liquid-cooled three-cylinder diesel engine available in the fan-to-flywheel version as well as an OPU (Open Power Unit) variant.
Both the 3H50T and the 4H50TIC were accompanied from examples in the Hatz range of air-cooled diesel engines and their sales and service teams were on hand throughout the show to answer all enquiries relating to the complete range of Hatz products.
Tarryn Jackson Hatz GB sales manager commented, “We expected keen interest in our new H50 range from both the construction machinery and hire markets because of its clean output, modest dimensions and easy maintenance. We were not disappointed. A steady stream of interested parties from manufacturers to users of diesel engines kept us all busy throughout the two days.”
“It was worth the effort we made to unveil the new 3H50T,” added Tarryn.
Launched in 2007, Executive Hire Show is a national exhibition for the tools, equipment and plant hire industry. The Show was held on Wednesday 7 and Thursday 8 February 2018, at Coventry’s Ricoh Arena.
HatzGB was founded in 1979, the company is a wholly owned subsidiary of Motorenfabrik Hatz GmbH. Hatz develops and manufactures diesel engines in a power range from 1.5 to 56 kW used to power a wide range of construction rental equipment.