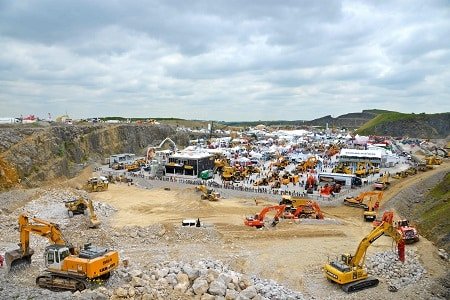 HILLHEAD is on target to have more exhibitors and demonstrations at its 2016 event than ever before, and with seven months still to go before it opens its doors, the show is already heading towards another complete sell out.
Major players including Terex Group, Volvo, JCB, Komatsu, Case, Sandvik, Hyundai, Bell, Liebherr, Doosan, Bell, Atlas Copco, Bomag, Wirtgen and McCloskey are all rebooked, as well as a host of other Hillhead regulars and plenty of new and returning companies.
Event director Richard Bradbury explained: ‘The rebooking process has been extremely positive and the buoyancy in the market has been reflected in stand reservations for both existing and new exhibitors. As a result, there is now very little outdoor space left to offer new exhibitors, and the show is expected to be sold out early in the New Year.’
The show takes place from 28–30 June 2016 at Tarmac’s Hillhead Quarry, near Buxton, and further details are available from the show website: www.hillhead.com