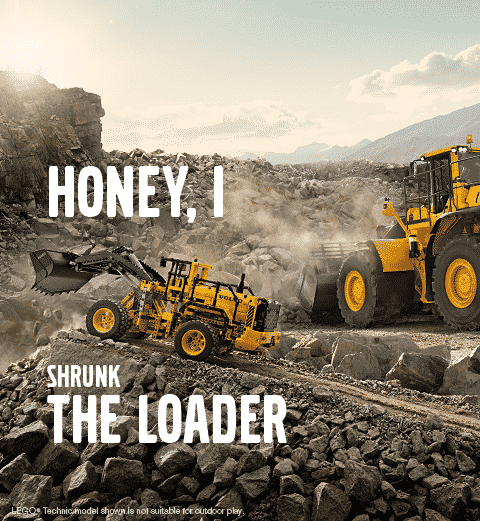 Honey, I shrunk the wheel loader

Watch the film ‘Behind the design’
With 1,600 individual pieces and the largest individual element ever created for the brand, the remote-control Volvo L350F wheel loader can lift more than 1kg in its bucket and drive over challenging terrain day in, day out – just like the real thing.
LEGO’s hands-on research
The film talks to the development team behind LEGO® Technic’s biggest machine for 2014 – from both LEGO and Volvo – charting their passion for getting their latest model as close a representation of the real machine as possible. It also follows LEGO® Technic’s Niels Henrik Horsted, head of marketing and design manager Jeppe Juul Jensen as they conduct hands-on research, visiting the Volvo factory and a construction site and operating a L350F themselves.
“We tried to make it as realistic as possible, so it drives, steers and lifts the load just like the real thing,” says Jensen. “You can also remove the oil filters, the radiator-door swings out, pistons move and the engine is painted green, just like in the real thing.”
Watch the film
The meticulously detailed and fully remote control Volvo model LEGO 42030 is available from LEGO Shop and all participating retailers.