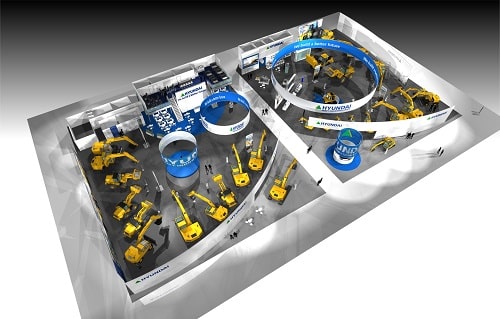 Hyundai Heavy Industries Europe (HHIE) will present an extensive range of equipment for the construction, utility, forestry & logging, recycling & waste handling and mining & quarrying industries at Intermat 2015. Many of the machines will be making their world premiere at the show.
The line-up includes the release of the first models of the new range of Tier4/StageIV compliant excavators and wheel loaders, alongside a comprehensive selection of other established models in the ever-expanding Hyundai range of excavators, wheel loaders and forklift trucks.
Hyundai is showing a grand total of 27 construction equipment machines and two forklift models on the company’s 3,000 square metre stand located in hall 5B. The impressive machine list reads as follows:

The existing -9 and -9A Series excavators and wheel-loaders are firmly established in all major markets with a strong reputation for reliability and value for money. Building on this position of strength, Hyundai has begun a radical update programme which resulted in the new Tier4/StageIV compliant series. The first machines of the new range will be making their global debut at Intermat 2015. The most significant change in this programme is the introduction of EU Stage IV compliant diesel engines, with reduced exhaust emissions and improved fuel economy. Besides the engine change there are numerous other updates ranging from the cabin features including dashboard and instrument cluster to the hydraulic control and the exterior design.
Mini/Midi Excavators
Among the eight mini and midi excavators ranging from 1.6t up to 8t operating weight are a couple of new or updated models. The R17Z 9A is new and available as of the first quarter 2015 and the R25Z-9A is updated with a new Kubota engine.

Heavy Line Excavators
With the introduction of the Tier4/StageIV compliant machines Hyundai has changed the model naming. This means that the all-new HX series ranging from the HX220L (22 tons) to the HX520L (52 tons) will be easy to identify and recognise by their new design.

Wheeled Excavators
Hyundai is proud to introduce the all-new R160W-9A, a machine that was clearly lacking in the existing product range. This new machine will expand the market coverage for Hyundai dealers around Europe, especially in France.
Wheel Loaders
As for wheel loaders the new Tier4/StageIV compliant machines are the HL 955 and the HL 960.
Forklift Trucks
HHIE believes that many of their construction equipment customers are also in need of a forklift. Two of the newest heavy diesel forklift trucks will be on display at Intermat 2015. Look out for the all-new heavy diesel Hyundai 80D-9 forklift with 8,000kg lifting capacity and the heavy diesel Hyundai 180D-9 forklift with 18,000kg lifting capacity, which was launched at Cemat 2014.
Hyundai Booth at Intermat 2015
Visitors are welcome at the Hyundai booth in hall 5B. Staff members from Hyundai Europe, Hyundai HQ and the French Hyundai dealers are looking forward to welcoming visitors with an interest in Hyundai’s products. There is something interesting to see for every visitor. Highlights including the new machine series, a merchandising shop, an excavator simulator, a photo booth, an operator’s cafe and daily entertainment are all featured on the Hyundai stand. For Hyundai customers there are also several hospitality areas.
About Intermat 2015
Commenting on the importance of Intermat, J.C. Jung the new CEO of HHIE said, “Market conditions continue to be tough for everyone, but Hyundai believes that it is important to demonstrate not just its latest products and innovations but also its continued commitment and support to all customers and dealers. And one of the best ways we can do this is by highlighting at Intermat the results of Hyundai’s on-going investment towards global leadership.” 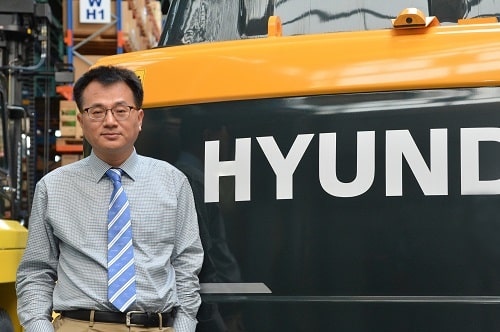