Intermat 2015, Paris: April 20-25 2015 – in Hall 5B
Hyundai Heavy Industries Europe (HHIE) will present the first two models of the new wheel loader range at Intermat 2015. The engineers at Hyundai have utilized the Tier4/StageIV momentum to re-design the wheel loaders. Hyundai say that many improvements from operator feedback in Europe have been implemented to create an ultimately better, stronger and more efficient machine for customers worldwide. 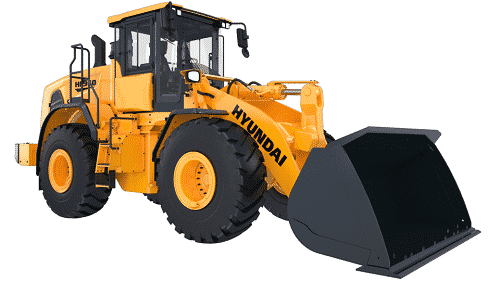 Hyundai model names made easier
To easily identify the new series of machines the models names have changed. The model numbers begin with two letters – “HL” stands for Hyundai wheel loader. The following three numbers indicate the model code. All new wheel loaders start with the number 9. The last three letters reflect the specific option on this machine – ‘WH’ stands for waste handling and ‘TM’ stands for tool master, etc.
New engine for better performance
With the new engines the machines are compliant with the latest regulations (Tier4 final and EU Stage IV final) for exhaust Nox reduction and particle matters. Hyundai has opted for a combined solution of EGR and SCR technologies. At the same time a reduction in fuel consumption of 10% has been achieved – this is dependent on the type of job the wheel loader is performing and its activity. Hyundai has selected several engine suppliers for the new machines but the HL955 and the HL 960 are equipped with new Cummins engines.
New exterior design for more robustness and safety
With the new engine technology the side vent holes have increased in size for a better airflow towards the engine. The new sized vents have slightly changed the graphical design resulting in better brand recognition. Also the head lamps have been re-designed for less vibration and longer durability, the standard bucket has been optimized for 5% more efficiency and less spill during driving and the engine is now easy accessible with the electrical, fully opening engine hood. The cabins are of course fully ROPS/FOPS certified.
New cabin for more comfort
The wheel loader cabin has been completely redesigned for better noise reduction, less vibration and more space for the operator. The ergonomically improved operator seat with seat mounted adjustable control levers are designed with the operators comfort in mind. All switches and buttons are now neatly centralized and easy accessible including the auxiliary spool control button that is integrated in the joystick. The air circulation has been dramatically improved for more comfort and last but not least the instrument panel and monitor screen are now state-of-the art.
Enhanced instrument panel for easier monitoring
Firstly there is the new and bigger seven inch monitor screen. Easier to read, full colour and with more functions including engine mode, fuel/energy consumption, weigh measurement, hydraulic control and Intelligent Clutch Cut-Off. The monitor can be controlled by touch but has also additional short cut buttons for a variety of functions. Connection with a mobile phone or tablet is now easier with the mobile phone screen mirroring feature and connectable cabin speaker.
About the new machines
Commenting on the improvements of the new wheel loaders, marketing manager of HHIE,
Milan Wamsteker said: “Hyundai has succeeded in raising the quality of the wheel loaders dramatically; functionally, ergonomically and performance wise! We invite everybody to visit us at Intermat in hall 5B and take the time to see this new generation of machines. We guarantee that a visit to Hyundai will be time well spent. Hyundai quality has never been better!”