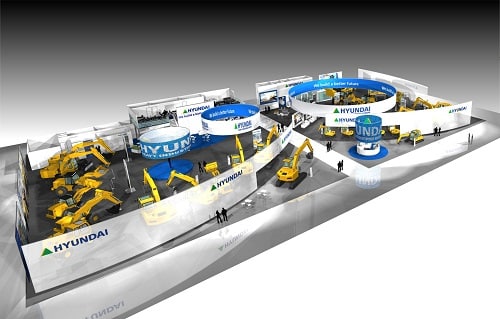 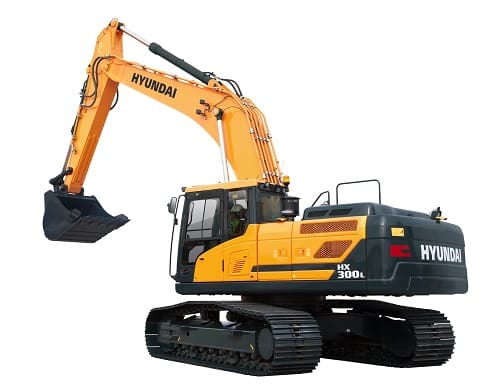 Hyundai model names made easier
To easily identify the new series of machines the models names have changed. The model numbers begin with two letters – ‘HX’ stands for Hyundai crawled excavators and ‘HW’ – stands for Hyundai wheeled excavators. The following three numbers indicate the operating weight in tons, multiplied by 10. So the ‘220’ has a total operating weight of 22 tons. The last three letters reflect the specific option on this machine – ‘CR’ stands for compact radius, ‘LR’ stands for long reach and ‘MH’ stands for material handling, etc.
New engine for better performance
With the new engines the machines are compliant with the latest regulations (Tier4 final and EU Stage IV final) for exhaust Nox reduction and particle matters. Hyundai has opted for a combined solution of EGR and SCR technologies. At the same time a reduction in fuel consumption of 3 to 6 percent has been achieved – in line with the nature of the machine activity. Hyundai has selected several engine suppliers for the new machines. The HX220 ~ HX380 are equipped with new Cummins engines and the HX520 with a new Scania engine.
New exterior design for more robustness and safety
With the new engine technology the side vent holes have increased in size for a better airflow towards the engine. The new sized vents have slightly changed the graphical design resulting in better brand recognition. Also the rear working lamp has been re-positioned for an improved view, a new guard rail has been installed for enhanced safety when climbing up the machine and maintenance air filters are now more accessible. The cabin has an improved front glass window for a wider, undistorted view.
Re-designed cabin for more comfort
The cabin has been redesigned – not just the front window but also the door – which is now easier to open from the inside with an extra handrail. These finishing touches on the inside of the cab mean greater comfort for the operator. The interior of the cabin has been re-arranged to provide 10 percent more space for the operator and better air circulation with the newly developed air-conditioning system. The operator has more available storage space and more importantly a new instrument panel and controls.
Enhanced instrument panel for easier monitoring
Firstly there is the new and bigger eight inch monitor screen. Easier to read, full colour and with more functions including centralized switches for a number of applications. The main view on the screen is adjustable to the operator’s preference and can be controlled by touch and/or by the new haptic control button (nowadays a common feature in passenger cars). Connection with a mobile phone is now easier than ever as well as connections with outside cameras for an all-round view.
About the new machines
Commenting on the improvements of the new machines, Milan Wamsteker, marketing manager of HHIE, said, “Hyundai has succeeded in raising the quality of the machines in so many aspects that it is almost too much to explain! We invite everybody to visit us at Intermat in hall B and take the time to experience this new generation of machines. We guarantee that a visit to Hyundai will be time well spent. Hyundai quality has never been better!”