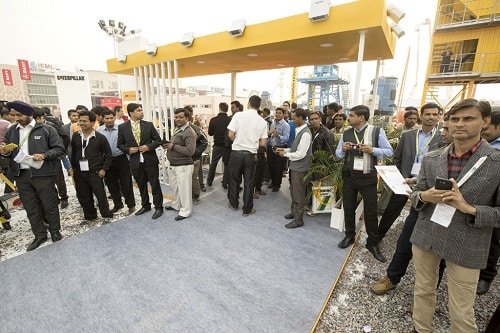 India is currently the only national market in Asia experiencing growing construction machinery sales. And growth is forecast for the next few years as well: Good leading indicators for BAUMA CONEXPO INDIA, which will be held from December 12 to 15, 2016 at the HUDA Ground in Gurgaon/Delhi.
Infrastructure projects boosting market

According to the Construction Equipment and Building Material Machinery Association within the Verband Deutscher Maschinen- und Anlagenbau (VDMA—German Engineering Federation), India is currently the only Asian country able to point to a growing construction machinery market. Infrastructure development is commonly held to be the driving force behind this development. The Indian government and international development banks are making billions available for new roads, bridges, sea and airports, as well as railway and energy projects. The German foreign trade and inward investment agency, Germany Trade & Invest (GTAI), has observed the government of this south Asian country with its billion-strong population pointedly dismantling barriers to infrastructure projects—lending further impetus to civil engineering. According to GTAI data, for example, expressway construction in India in 2016/17 is to be expanded to 15,000 km compared with 6,000 km the year before.
With a view to current conditions and all currently foreseeable factors, the British market research company Off-Highway Research arrives at a very favorable forecast for the next five years as well. It envisages the approximately 55,000 construction machines the analysts expect to be sold in India in 2016 climbing steadily to more than 71,000 units by 2020. The top sellers, with a combined market share of over 90 per cent in 2020, are expected to be backhoe loaders, crawler excavators, mobile cranes, mobile compressors, compactors and wheel loaders.
Numerous industry key players registered

Since then Caterpillar, JCB, Potain, Putzmeister, TIL and XCMG have also applied to the show. There are also prominent names among first time exhibitors: three industry big beasts in the guise of Comacchio, Kubota and L&T and Komatsu will be making their debut appearance at BAUMA CONEXPO INDIA. You will find an overview of all participating companies in the exhibitor database at www.bcindia.com/exhibitor-directory.html
Visitor registration online

Visitor registration is also immediately available online (www.bcindia.com/trade-fair/visitors/ticket/index.html). The benefit of this is that it is free, unlike registration on-site. The ticket is delivered by e-mail, obviating waiting times on-site. A complimentary shuttle service to the trade fair is also provided for all visitors to BAUMA CONEXPO INDIA. Additional information on services for participants—such as opening times, special hotel offers etc.—is to be found at www.bcindia.com/trade-fair/visitors/index.html