Le Vieux Port : Past and Present
Until the C19 the Vieux Port remained the centre of maritime activity in the city.

Vieux Port, Marseille [Image Source]
In the Middle Ages land beyond the port was used to cultivate hemp for the local manufacture of rope for mariners.
René, Duc de Anjou wished to equip the entrance of the port with a solid defence, built on the ruins of the old Maubert tower and between 1447 and 1453 established a series of ramparts guarding the harbour. Jean Pardo the engineer conceived the plans and Jehan Robert, mason of Tarascon carried out the work. Between C15 and C17 quays were constructed under Louis XII and Louis XIII and an important shipyard for galleons was erected. Following a revolt by citizens against their governor Louis XIV ordered the erection of Fort St Jean and Fort St Nicolas at the entrance to the harbour.
The notorious arsenal des galères was situated on the side of the Vieux Port between Cours Jean-Balard and the Cours Estienne-d’Orves.
According to John Murray, in 1854 the Vieux Port had a capacity of between 1,000 and 1,200 ships. Roughly 18,000 merchant ships passed through the port annually, carrying about 20 million barrels worth of freight; this represented a quarter of the trade in Liverpool at the time. The 6m depth of the harbour, however, proved problematic for steamships later in the century; much deeper docks had to be constructed at La Joliette. The Vieux Port was ruined during World War II. Much of the historic old town was destroyed and the transbordeur (transporter bridge) was demolished. This was an engineering tour de force that had become a major city landmark, comparable to the Eiffel tower in Paris. In 1948 Fernand Pouillon was placed in charge of the reconstruction of this devastated old quarter. Former Transporter Bridge, Marseille [Image Source]
Today as part of the European City of Culture 2013 vision, the Vieux Port is used as a marina, a terminal for local boat trips and hosts a local fish market. 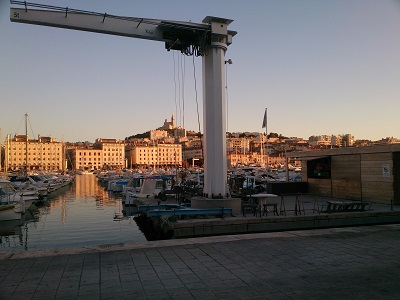 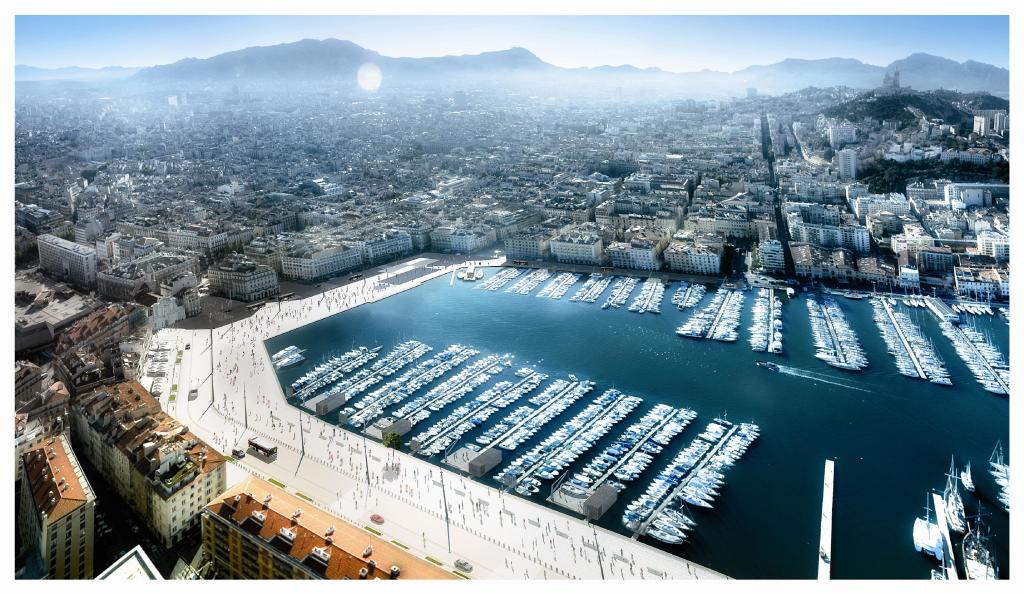 [Image Source] via http://www.mp2013.fr
The Vieux Port Pavilion:
The pavilion is a canopy of highly reflective stainless steel, 46 x 22m in size, open on all sides and supported by slender pillars. Its highly polished, stainless steel surface symbolically reflects and unites the rich ethnic diversity of its people as well as the surrounding port. It is tapered towards the edges, minimising its profile and reducing visual impact. It reclaims the quaysides as civic space and reconnects the port with the city. Boat houses and associated equipment that previously lined the quays have been relocated to new platforms and waterside clubhouses. The pedestrian area around the harbour has been enlarged and traffic will be gradually reduced over the coming years to provide a safe, pedestrianised environment extending to the water’s edge.
The landscape design includes a new pale granite surface in the same shade as the original limestone cobbles. The simple hard-wearing, roughly textured materials are appropriate to the port setting and improve accessibility for all, doing away with kerbs and level changes.
Spencer de Grey at Foster + Partners commented that,

“Our aim has been to make the Vieux Port accessible to all – the project is an invitation to the people of Marseille to enjoy and use this grand space for events, markets and celebrations once again. The new pavilion is quite literally a reflection of its surroundings – its lightweight steel structure is a minimal intervention and appears as a simple silver line on the horizon, but it brings a new focus, provides basic shelter and creates a venue for performances.”

MuCEM:
Viewed from the sea, the Vieux Port is visibly connected via the 15000m2 site of Fort St Jean which is now linked via a 115m long raised walkway to the 17000m2 Musée des Civilisations de l’Europe et de la Méditerranée (MuCEM) building conceived by Rudy Ricciotti and Roland Carta. This in turn leads to the La Joliette area of redevelopment via the J4 Esplanade. 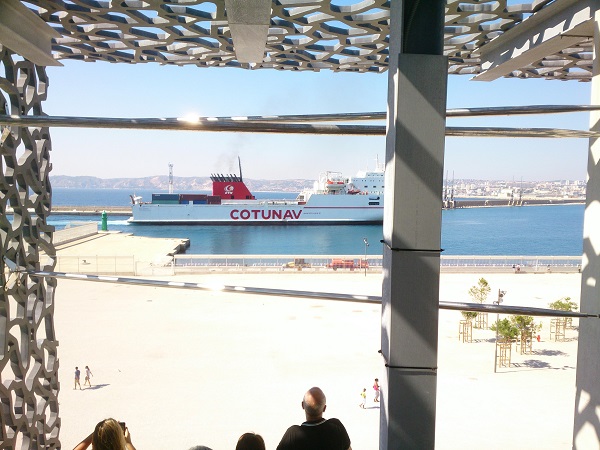 MUCEM / Vieux Port – Photo Credit: Atelier d’Architecture Gérard Ettore, Montpellier
The Vieux Port enhancement project also includes a second phase with parks around the port, which will be achieved in 2020.

Read also:
Part 1 ; https://constructionshows.com/marseille-phocean-city-part-3-euromediterranee-project/149377
Part 2: https://constructionshows.com/marseilles-phocaean-city-part-2-heritage-within-the-urban-framework-and-multi-modal-transport-system/019374
Part 3: https://constructionshows.com/marseille-phocean-city-part-3-euromediterranee-project/149377
Author: Mary Bon
Mary is a RIBA accredited architectural researcher, with previous international experience in architectural practice. She has proven research and writing experience for both established clients and innovative start-ups in the construction industry worldwide. She is now based in France and orientated towards bridging the gap between landscape and architecture whilst supporting the causes of local, national and international built and natural heritage.