Hoddle Grid
The centre of the City of Melbourne‘s central business district (CBD) is formed by the Hoddle Grid (dimensions of 1.6 by 0.80km) first laid out in 1837. It is attributed to Robert Hoddle but known that it was based largely on the work of his predecessor Robert Russell and was initially approved by Governor Bourke (1831-1837).
All major streets are one and half chains (99 ft or 30 m) in width, while all blocks are exactly 10 chains square. The grid’s longest axis is oriented 70 degrees clockwise from true north, to align better with the course of the Yarra River. The majority of the city is oriented at 8 degrees clockwise from true north.
It was controversial – it was much larger than the population of 4000 people needed, and the roads were unusually wide. Bourke disapproved of the plan but Hoddle convinced him that wide streets were advantageous to the health and convenience of the future city and the plan has proven, in time, to be far-sighted for public use.
In return for allowing wide main streets, Bourke insisted that every second street running north and south be a mews street. This left Melbourne with a legacy of constraint and necessitated the Council, in the late 1930s, to request the enactment of legislation to permit it gradually to buy back a four-foot strip of land on both sides of the mews streets when redevelopment of each property fronting them took place.
Land allotments for sale at public auction were to be produced as quickly as possible to deliver to the market. Governor Gipps however insisted that all towns laid out during his term of office (1838-1846)should have no public squares included within their boundaries.
The grid was defined largely by the geography of the area. It was planned to span a gently sloping valley between small hills (knolls) and roughly parallel to the course of the Yarra River. Elizabeth Street, in the centre was built over a gully, so has been prone to flooding.
The wide main streets of the Hoddle Grid were designed to accommodate the large number of bullock carts that would ride through the centre of town preventing them from holding up horse drawn traffic when making right turns.
In the 1860s, survey plans proposed to extend the district. 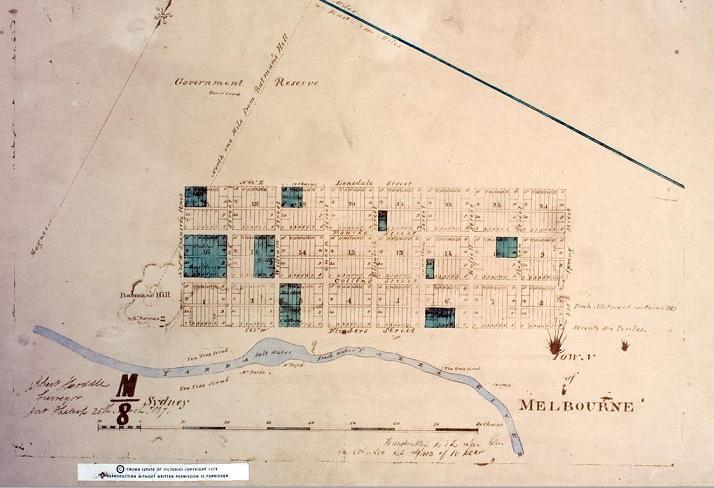 Hoddle Grid Plan 1837
[Image Source]
C19 and C20 Architectural and Landscape Heritage
Today, the city’s CBD is recognised for its mix of tall commercial buildings juxtaposed with historic C19 and C20 buildings and for its historic civic buildings, lanes, arcades and memorials.
It is dominated by tall office buildings including the Rialto Tower (1998) built on the site of several grand classical Victorian buildings, two of which included the Old Rialto Building (1889) the city’s second tallest at the time, by William Pitt and the Winfield Building (1890) by Charles Debro and Richard Speight, which remain today. 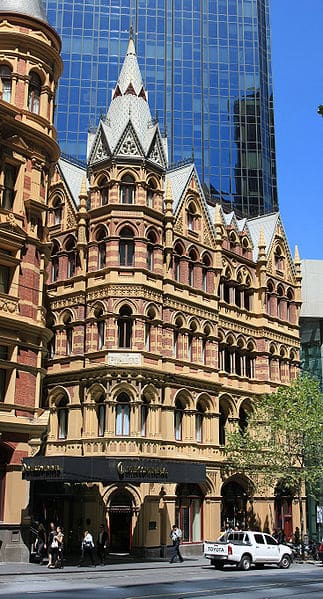 Old Rialto Building in front of the Rialto Tower
[Image Source]
The now demolished Queen Anne style APA Australian Building (1889), was the world’s 3rd tallest building at the time of completion.
It also contains some of the city’s most architecturally noteworthy historic structures including the UNESCO World Heritage listedRoyal Exhibition Building as well as bridges, churches and other civic institutions listed on the Victorian Heritage Register or National Trust of Australia register and many are linked with historic landscape settings, a few examples of which are considered here.
Princes Bridge:
In 1840 a company was formed to build a bridge across the Yarra River. By 1845, controversy had erupted over the bridge’s location. Superintendent of Port Phillip, Charles Joseph La Trobe favoured the end of Elizabeth Street where the water was a little over 6m. deep with a thick, black mud bottom, but the company preferred Swanston Street where the depth of the water was only 2m. with a hard, gravel bed.
Despite arguments, the original wooden bridge named after the Prince of Wales, later Edward VII,was built just above the present Princes Bridge. It remained a toll bridge until it was superseded by a free government bridge by David Lennoxin 1851. This bridge was a single span 150 ft (46 m) bluestone and granite arch bridge, with a rise of only 24 ft (7 m) and was at the time, one of the longest, flattest stone arch bridges in the world. This second bridge was known as Lennox’s Bridge.
The current Princes Bridge, was designed by Jenkins, D’Ebro and Grainger and constructed by David Munro. It is140m long by 30m wide, was opened in 1888 and is listed on the Victorian Heritage Register. It is built with Harcourt granite squat half columns resting on the bluestone piers that support the three iron girder arch spans. It connects Swanston Street on the north bank to St Kilda Road on the south bank and carries road, tram, cycle and pedestrian traffic.

Prince’s Bridge
[Image Source]
St James Old Cathedral
The Cathedral Church of St James, a modest wooden structure, first opened for worship in 1837. One of the first subscribers to the fund for the building was John Batman.
In 1839, the foundation stone for a permanent church, the new St James Church, was laid by La Trobe. The church was one of the first substantial brick buildings to be built in the town. The church was designed by the town surveyor Robert Russell and built by George Beaver. It was opened in 1842 and completed in 1847.
It remained as the Cathedral Church until 1891 and was moved to its present site in west Melbourne in the next century. St James Old Cathedral, as it is known today, is also listed by the National Trust of Australia, is on the Victorian Heritage Register and is the oldest church in the city. 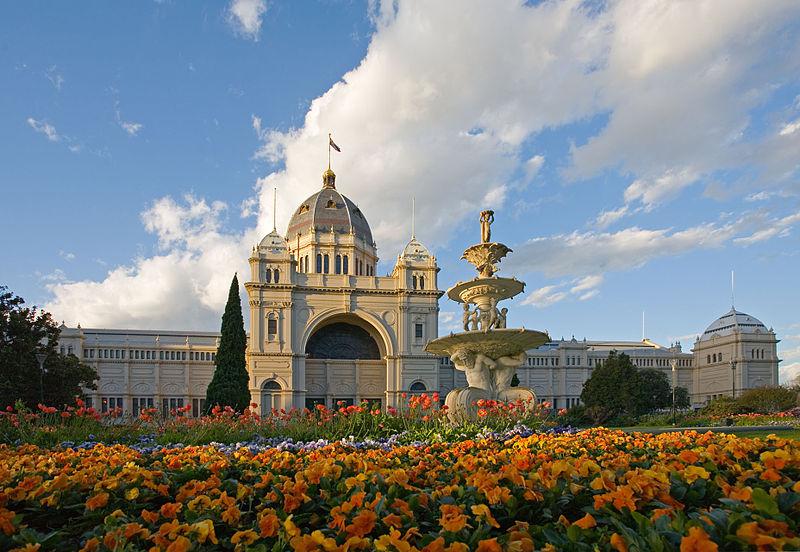 Royal Exhibition Building / Carlton Gardens
[Image Source] South Melbourne Town Hall:
South Melbourne Town Hall was built between 1879-80 to the design of local architect Charles Webb in the Second Empire style and is considered one of the grandest examples of this style in the country. It is listed on the Victorian Heritage Register and is part of the Bank Place precinct, one of the best preserved Victorian era conservation areas in the world. 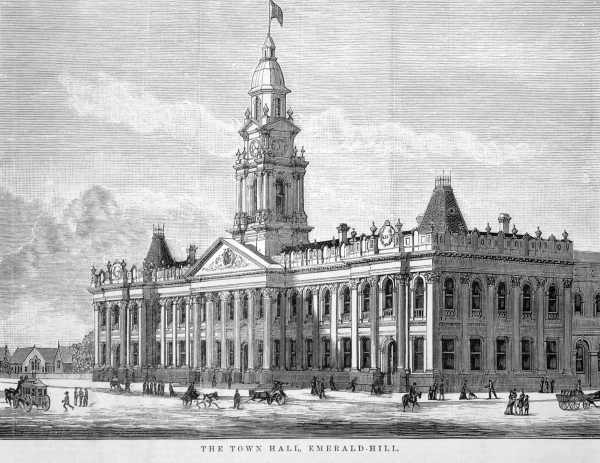 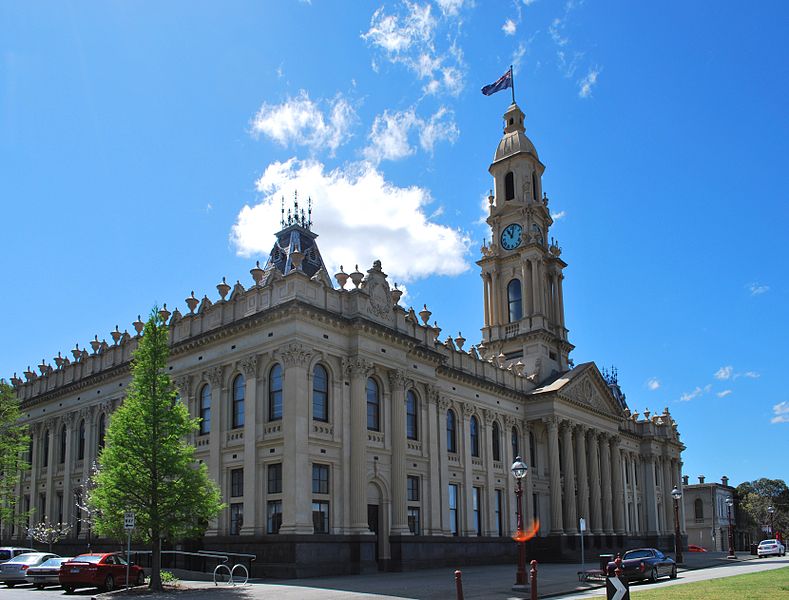 South Melbourne Town Hall
[Image Source]
State Library of Victoria
The State Library is located in the northern centre of the CBD and holds over 2 million books and 16,000 serials.
In 1853, the decision to build it was made at the instigation of Lieutenant-Governor La Trobe and Mr Justice Redmond Barry, Q.C. A competition was held to decide who would design the new building and Joseph Reed won the commission. It opened in 1856.
The landmark Domed La Trobe Reading Room, which opened in 1913 was designed by Norman G. Peebles. Its octagonal space was designed to hold over a million books and up to 500 readers. It is 34.75 m in both diameter and height, and its oculus is nearly 5 m wide. The dome was the largest of its type in the world on completion.
The lawn in front of the entrance on Swanston Street is today a popular place for the city’s workers and students at the adjacent RMIT University. Originally enclosed by a picket fence, then by a wrought iron fence and gates in the 1870s, the space was opened with the removal of the fence in 1939.
A number of statues are in the entrance area. 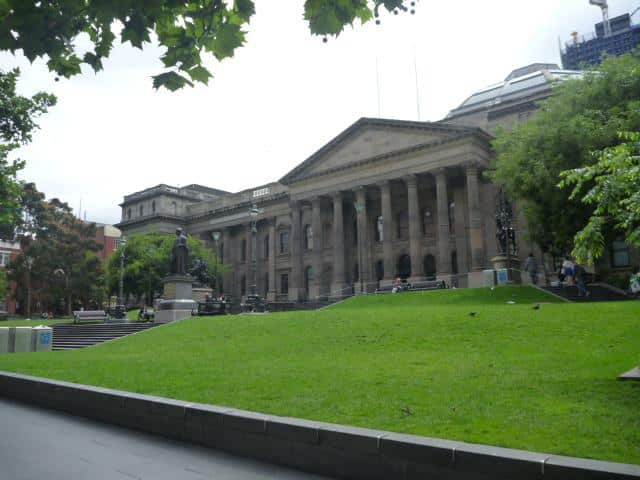 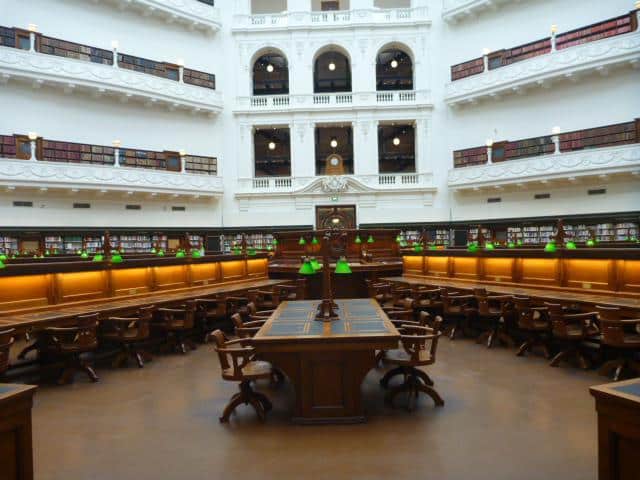 “Fitzroy is unique in comparison for its scale and uninterrupted landscape. There are some horticultural similarities between Fitzroy and the Treasury Garden, attributed to the initial work of Hodgkinson, however Fitzroy Gardens is unique due to the layering of history and mosaic of different landscaping styles.”

The area was once a swampy piece of ground containing the remains of a quarry.
In 1848 the Gardens were permanently reserved as public gardens, vested jointly in the State Government and City of Melbourne. They were known as Fitz Roy Square until 1862 and were named after Sir Charles FitzRoy, governor of New South Wales. The Gardens provide the landscape setting for the Bank Places precinct’s government buildings and churches. In 1857 James Sinclair was appointed as head gardener of the land that was to become the Fitzroy Gardens and personally supervised the gardens, to a design by Clement Hodgkinson. The formal design was naturalised with the creation of a dense woodland with meandering avenues and a gully of ferns. Planting at this time included many now historic, elm trees.
By 1900 most plants had been replaced by English trees, including Elms, while lawns and flower beds were almost non-existent. Instead, the gardens were decorated with copies of classical and modern statues lining the paths, a bandstand, rotunda, and numerous fountains. 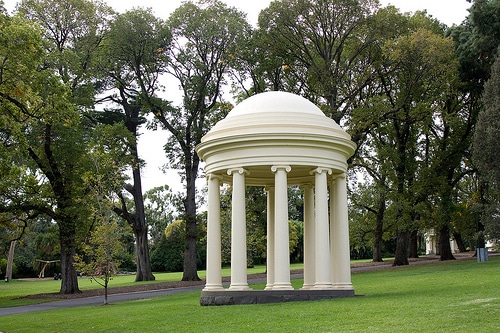 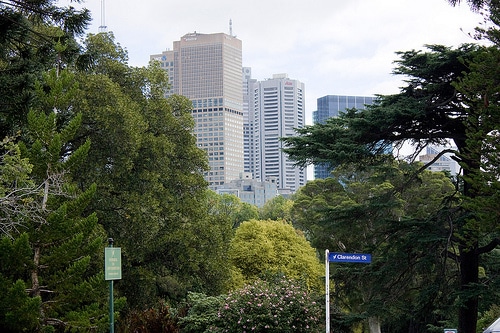 Melbourne skyline from Fitzroy Gardens
[Source] Shrine Reserve
The city also features the Shine Reserve including the Shrine of Remembrance, built between 1928 and 1934 as a memorial to the men and women of Victoria who served in World War I and now a memorial to all Australians who have served in war.
As stated in the sites website, shrine.org.au,

“…Consisting of 13 hectares of memorial parkland, the Shrine Reserve was conceived as a fundamental component of the Shrine of Remembrance… “

The Shrine, designed by Hudson and Wardrop, was inspired by the tomb of King Mausolus at Halicarnassus in south-west Turkey, one of the seven wonders of the ancient world. It takes the form of a cenotaph, or empty tomb, and is aligned with Swanston Street, providing a strong visual connection via a formal axis to the city.
A broad ceremonial approach lined with Bhutan cypresses climbs the slope to a large forecourt in the shape of a cross. The symmetrical layout of paths radiating from the Shrine into the surrounding landscape is balanced by trees arranged informally in spacious lawns. 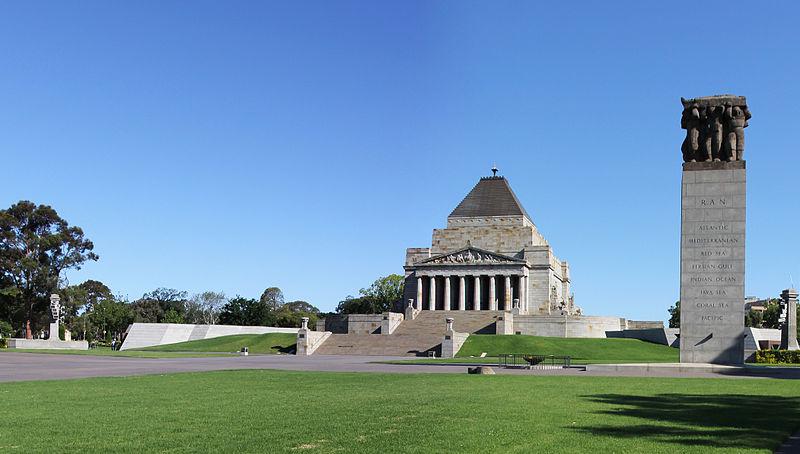 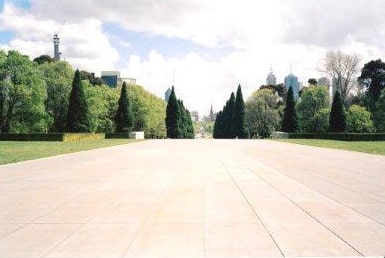 View of the City from the Shrine of Remembrance
Photo Credit: A C McCreight
Please find Part 1  here: https://constructionshows.com/melbourne-garden-city-part-1-historical-development/2610501