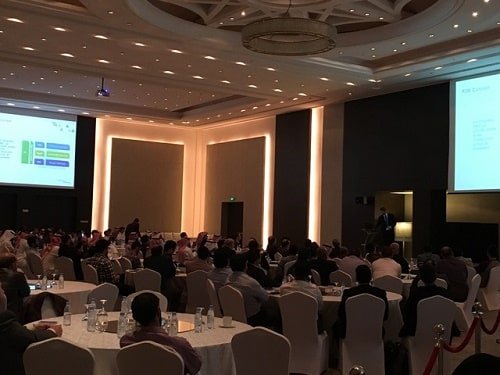 Riyadh, Saudi Arabia – December 6th, 2016 – Faithful+Gould, the leading integrated project & programme management consultancy in association with the prominent Saudi Council of Engineers held the third professional development seminar today at the Al Khozama Banqueting & Conference Centre in Riyadh delivered by David Clifton, regional development director at Faithful+Gould with opening remarks by Ahmed Almulhim the Chairman of the Project Management Chapter for the Saudi Council of Engineers.
The Seminar is part of an extended series of professional development events designed to encourage and educate project managers and industry professionals on the importance of early engagement of project & programme management and best practices by furthering knowledge and sharing the tools necessary for overall delivery of a project within budget and on time. The seminar was attended by approximately 200 industry professionals with over 40 women in the audience many from the engineering department at Princess Noora University.
The professional development seminar provided a detailed look at the structure of a Project Management Office and its embedded functions and the benefits they can deliver starting with a consistency in approach; a central hub for information management and control, efficiencies derived from economies of repetition, greater levels of assurance across all investment, improved management of capital expenditure, risk management followed by an in-depth analysis of the Kingdom’s economy.
Dr. Haifa M. Alhababi – assistant professor of architecture & design at the College of Engineering from Princess Noora University commended the event for the important role it plays in giving industry professionals the opportunity to gain project management knowledge. “Faithful+Gould have created a wonderful event; well-organized, well-prepared and their efforts are well-received. It also provided a well-rounded and insightful insight into the market situation. Most importantly it was a vital opportunity for female engineers on the rise to learn and participate in prominent industry events such as this.”
The series of seminars have become critical in light of the falling prices of crude oil and the Kingdom reducing its expenditure with projects either scaled down and revised or put on hold indefinitely. As such, it has become increasingly important to bring best practice to the industry providing a reliable mechanism through Project Management Offices for the delivery of projects and programmes in line with the country’s National Transformation Programme (NTP) and the Saudi Vision 2030, the PMO programme for government and related entities is being rolled out with Faithful+Gould anticipating that due to the complexities of designing and implementing these initiatives, all of 2017 – will be required to make the PMOs operational at all levels of government ensuring successful outcomes.
Although The Kingdom is still running a significant deficit of $87bn (SAR326bn) as we approach the end 2016, upward pressure on oil prices will commence which is hoped to ease some of the fiscal pain.
Earlier this year, David Clifton, a leading regional PMO expert; forecasted $29.9bn (SAR112bn) of construction awards in Saudi Arabia with $18bn (SAR67.5bn) having already been awarded by Q3 2016 while awarding of the Mecca Metro in Q4 would be required, as per Royal Decree, for his upper estimates to be achieved with the private sector having delivered more than 70% of awards; an inversion compared to all previous years on record.
Clifton further estimated that in 2017 the Saudi Arabian market would witness further contraction with forecasted awards totalling approximately $27bn (SAR101bn), which represents a further contraction of more than 9%. This is a consequence of the PMO implementation, and the subsequent lack of government work therefore placing the construction market in a position where it’s reliant again on private developers and Saudi Aramco. The situation is expected to ease only in 2018, although there is a strong case for one-off major infrastructure awards, as in the instance of Mecca Metro.
Government efforts to modernise and cut costs within the kingdom’s construction sector have commenced with additional reductions in subsidies for power and water and a continued streamlining of the public sector is expected, and may bear witness to the amalgamation of ministries and governmental departments.
As for Saudi Arabia’s pipeline of schemes, the trillion-dollar question remains, not around the $20bn (SAR75bn) of cutbacks already announced, but in relation to reprioritisation and timelines. The government had planned to enact $700bn (SAR2.6tn) of projects on a 10-year horizon. Extending this timeframe to 20 years will have a dramatic effect on the industry as, in essence; it would involve the halving of public sector awards in the kingdom.
As Saudi Arabia’s short-term outlook has worsened at the end of 2016, and as awards struggle to meet general forecasts, Faithful+Gould now expects construction inflation to have turned negative by the end of 2016 with the expectation that 2017 will be slow in the kingdom. Nevertheless, Clifton and F+G have forecasted that 2018 will start to reflect the impact of regional event-driven spending, and the re-entry of Saudi Arabia’s government to the construction awards market.
Faithful+Gould was part of an advisory panel for the former Minister of Economy and Planning (MEP) that led to the draft of the NPMO Royal Decree in September 2015. This collaboration was part of a 2-year initiative implemented between Faithful+Gould and other industry players, in coordination with His Excellency Mohammed bin Sulaiman bin Mohammed Al-Jasser, Saudi Arabia’s previous Minister of Economy and Planning.
Stay up to date with construction news and events by signing up to our newsletter here

Share
Previous Keep It Clean! (Your Diesel Fuel, That Is)
Next OPS to distribute Terex Trucks’ articulated haulers in Australia

The arch of #innovation is a cable-stayed #bridge that will connect Zarur, São João, and Cassiano Ricardo avenues in São Paulo, Brazil...