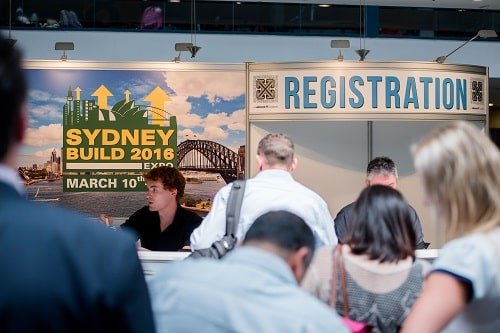 The 10th and 11th of March saw the Australian Technology Park in Sydney host the Sydney Build Expo 2016. The setting was ideal as Sydney is one of the main areas in Australia where construction industry growth has continued strongly, despite tapering off elsewhere. This brief summary looks at the highlights across the breadth of the activities which took place at the 14 hectare campus.
Over 3000 attendees gathered for two days of browsing exhibition stalls, attending talks, workshops, and demontrations as well as networking with key figures from the industry. Exhibitors included multinational firms such as Bosch, Canon and HP, alongside reps of organisations including Lendlease and Sydney Water who delivered informative speeches and led interactive discussions in the workshops. Attendees were primarily from small firms (with fewer than 25 employees) who will have been looking to use this opportunity to grow their client base, but 7% of the companies present employed over 1000 staff members so the event was by no means small scale! Roughly half the companies in attendance were architects, builders, engineers, manufacturers, developers or contractors but a host of other specialisations were represented as well.
Plenty of value was generated from four exclusive VIP ‘Meet the Buyer’ sessions which provided networking opportunities for exhibitors and nearly 500 VIP guests. The schedule for these was comprised of ‘Meet the Architects’ sessions on each day as well as ‘Meet the Contractors’ on Thursday and ‘Meet the Government & Residential/Commercial Developers’ on the Friday. Feedback from both guests and exhibitors was overwhelmingly positive regarding these opportunities to forge connections within the construction industry of Sydney and New South Wales.
The quality and diversity of conference speakers was also extremely high, with topics ranging from government views on sustainable development to workplace safety and new construction technologies. Workshops ran throughout the event focussed on four key areas: Business Skills & Innovation, Architecture Design & Marketing, Building Solutions & Sustainable Building, and Health, Safety & Environment. Within these, subjects ranged from fire detection to Facebook!
To top off the event, it received great support from industry and media alike. Partners included high-profile bodies like RICS and BCI Australia, while Facebook events and Twitter handles for the Expo were hot topics over the course of the two days.
If all this sounds appealing, organisers Oliver Kinross have already opened registration for 2017, with next year’s Sydney Build Expo taking place on the 23rd and 24th of March. For more information or to register for either an exhibition pass or a free visitor’s pass check out http://www.sydneybuildexpo.com/.
Postreport download here
Jake Waller