Exports of U.S.-made construction equipment ended 2014 with a 13.2-percent drop compared to 2013, with a total $17.26 billion shipped to global markets.
U.S. exports fell to all world regions for 2014. Business to Europe, South America and Australia/Oceania was the hardest hit, according to the Association of Equipment Manufacturers (AEM), citing U.S. Department of Commerce data it uses in global markets reports for members.

The top countries buying the most U.S.-made construction machinery during 2014 (by dollar volume) were:

The fourth quarter of 2014 marked the eighth consecutive quarter that U.S. construction equipment exports experienced year-over-year declines.
While exports have been decreasing steadily since the second quarter of 2012, imports have been trending higher. The fast growth in the post-recession export figures (2009-2012) was a strong driver for domestic manufacturers, though it appears the domestic market has become one of the more robust growth engines for the industry.

From a global perspective, the U.S. market remains strong, though somewhat affected by the oil price declines.
In the global markets:

The strong decrease in exports to Belgium can be attributed to the overall European market, as Belgium remains a through-put nation
More Economic Resources
AEM’s Construction Equipment Global Markets report (and select other reports) are available to the public online (www.aem.org) through the AEM store (www.safetymaterials.org). AEM members may access the report via the AEM website/Market Intelligence section.
Custom detailing exports by 10 Digit HS code to various countries worldwide, as well as an overview of export market opportunities by product, are available on request. For more information, contact AEM’s Benjamin Duyck, director of market intelligence (bduyck@aem.org). 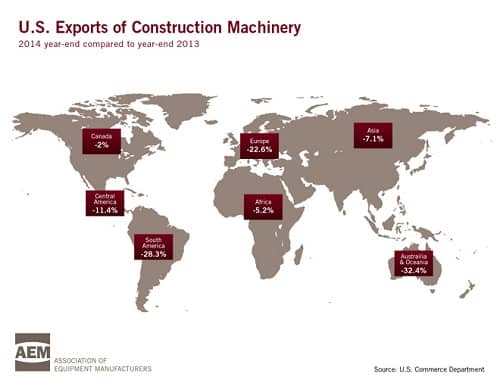