UK Exports and Imports of Construction and Earthmoving equipment*

UK exports of construction and earthmoving equipment continued to show modest growth in Q2 2016, and reverse the declining trend seen in 2015, which reflected poor demand in many major overseas markets. Measured in volume terms (tonnes), exports showed 6.1% growth in Apr/Jun 2016 compared with Jan/Mar, at 136 k tonnes. However, compared with the same quarter in 2015, Apr/Jun was still 10.3% below last year’s level.
Measured in value terms, exports also show an improving trend, but at more modest levels. Apr/Jun showed a 0.7% increase on Jan/Mar at £595 million fob, which in turn was 4.4% higher than Oct/Dec 2015.
Exports of equipment to EU markets remains on a rising trend, and account for a growing proportion of total exports. In volume terms (tonnes), exports to EU countries accounted for 47% of total exports in the first half of 2016, compared with 40% in 2015. Latest market forecasts suggest that this trend is likely to continue in the second half of 2016, with equipment demand in European markets growing at stronger rates than all other markets except India.
The UK remains a net exporter of construction and earthmoving equipment, with the surplus remaining relatively stable in the last 18 months, within a range from 60 to 70 k tonnes per quarter. In Apr/Jun 2016 the surplus was 62 k tonnes, very similar to Jan/Mar levels. On a value basis, the export trade surplus has shown a narrowing trend in recent quarters, with Apr/Jun 2016 at £244 million, compared with an average of over £300 million per quarter in 2015.
UK imports of construction and earthmoving equipment showed further increases in Q2 2016. Measured in volume terms (tonnes), imports showed a 10.5% increase in Apr/Jun compared with Jan/Mar, at 74 k tonnes. However, in the first half of 2016 import levels are still 11% below 2015 levels.
In the first half of 2016, UK equipment manufacturers exported machines to over 160 different countries. The top 3 destinations accounted for over 40% of total exports in volume terms, consisting of the USA (22%), Irish Republic (10%) and Germany (9%). Exports to the Irish Republic and Germany continue to show growth in 2016, while exports to the USA have fallen back from levels seen in the first half of 2015.
In the first half of 2016, UK imports of construction and earthmoving equipment arrived from over 60 different countries. The top 2 importing countries in 2016 are Japan and Germany, similar to 2015. Between them, they accounted for 31% of total volume, and 34% of total value in Jan/Jun 2016. Both countries showed increased levels in Apr/Jun compared with Jan/Mar.
A more comprehensive report on UK exports and imports of construction and earthmoving equipment, including details by country, is available to CEA members.
*Definition of equipment included in the analysis of export and import statistics
Analysis of trade data in Q2 has been conducted on a broader basis than the initial Q1 analysis. This change has been made to bring the definition of equipment included in the analysis in line with other country trade associations within CECE (Committee for European Construction Equipment). For Q2, trade data has been used from 9 different HS (Harmonized System) codes. This consists of the following at the 4 digit level:
8413 – concrete pumps
8474 – crushing and screening equipment, and concrete, mortar and other types of mixers
8479 – machinery for public works
8701 – track-laying tractors
8704 – dump trucks for off-highway use
8705 – concrete mixers
8426 – cranes (but excluding gantry cranes, overhead travelling cranes and ship derrick cranes)
8429 – construction and earthmoving equipment – including bulldozers, graders, scrapers, loaders, excavators, shovels, tamping machines and road rollers
8430 – pile driving and pile extracting equipment, tamping and compacting machinery
Paul Lyons – August 2016 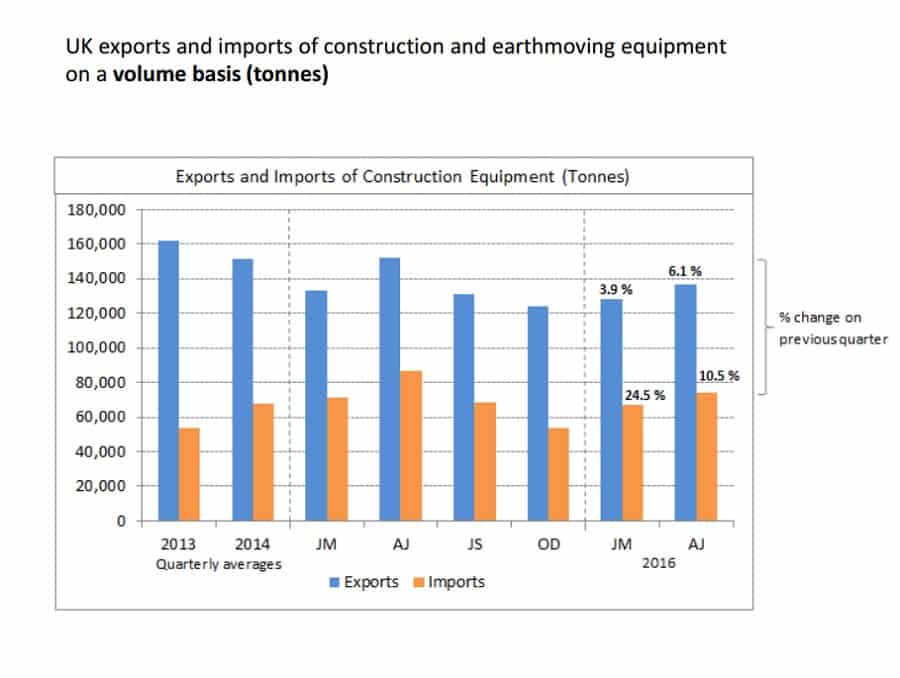