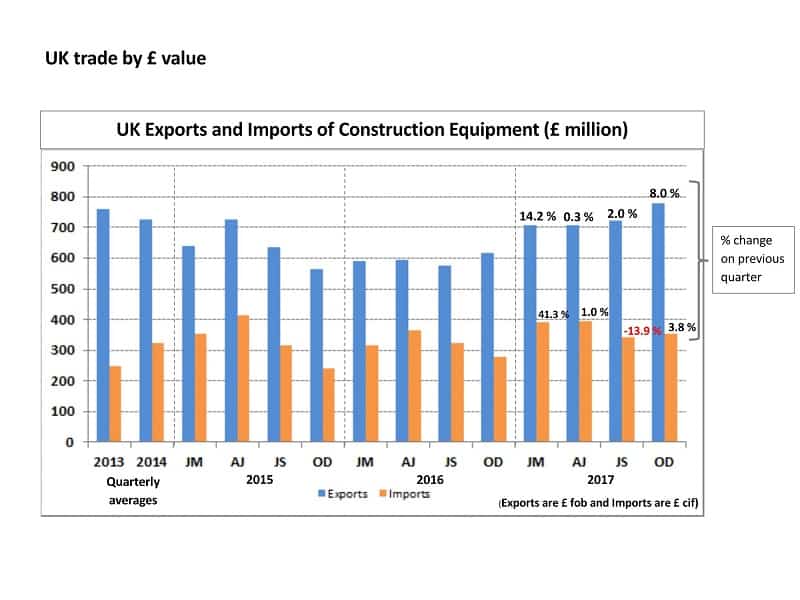 UK Exports and Imports of Construction and Earthmoving equipment – Q4 2017

UK exports of construction and earthmoving equipment continued on a strong upward trend in the last quarter of 2017, showing growth for the fifth consecutive quarter. Exports in Q4 2017 showed an 8.0% increase on Q3 levels, at £780 million, and was the highest for over three years.
A strong finish to 2017 resulted in total exports showing a 22.7% increase on 2016 levels at £2,917 million. UK equipment manufacturers are continuing to benefit from improving demand in many of the major overseas markets, as well as the benefit of the weaker £ exchange rate since the middle of 2016, following the Brexit referendum.
The USA remained the top destination for UK exports in 2017, accounting for 24% of total exports on a £ value basis. Collectively, exports to EU28 countries have increased slightly to 42% of total exports on a £ value basis in 2017, compared with 41% in 2016.
Imports of equipment showed an increase in Q4 of 3.8% in £ value terms compared with Q3, but didn’t return to the levels seen in the first two quarters of the year. However, overall imports in 2017 showed a 16.1% increase on 2016 levels, at £1,481.
Import data showing higher levels of imports of equipment in 2017 are consistent with growth in equipment sales to the UK market, according to the UK construction equipment data exchange.*
This shows an increase of nearly 8% in retail sales of equipment in 2017 compared with 2016, at approximately 30,000 unit sales.
Japan remained the single biggest country source of imports in 2017, and showed a 54% increase on 2016 levels to reach £297 million. This increased their share of total imports from 15% in 2016 to 20% in 2017. However, imports from EU28 countries in 2017 totalled £908 million and accounted for 61% of total imports.
In summary, the UK remained a net exporter of construction and earthmoving equipment in 2017. On a £ value basis, the trade surplus showed a significant increase in 2017 to reach £1,429 million, 30% higher than 2016. Overall, exports were not far short of double the level of imports in 2017.

Share
Previous Upcoming Dakar Summit in April to Spotlight on Africa’s Promising Cement Market
Next Everything Is Bigger in Texas, Including The Record-Breaking World of Asphalt Show & Conference and the AGG1 Academy & Expo