Port Infrastructure
Commercial Port
Since 1982, with the increase in containerisation, modernisation of the Valparaiso commercial port superstructure and operation began as a private-public partnership.  Continued export growth and advances in maritime technology have demanded further investment in dock infrastructure and equipment, a significant new phase of which is under consideration today.
Seatradeglobal.com has recently announced that

“…with the anticipated expansion Valparaiso will become the largest port in Chile. The port of Valparaiso plans to double its capacity by 2017. The necessary investments private and public, will reach US $507 million for the construction of a second terminal.

The second terminal will be similar in size to the existing port and increase the capacity of Valparaiso to 22 million tonnes of cargo and 950,000 TEUs. This project aims to reposition Valparaiso as a leader in the port market and enhance the competitiveness of Chile. Since 2011, the Chilean government has invested more than US $1.8 billion to increase the capacity of Chilean ports…”

In order to enlarge the port it appears necessary to consider the demolition of certain historic fiscal houses dating from 1866 deemed to have heritage value in Calle Antonio Varas and the loss of the San Mateo beach and Avenida Altamirano seafront walk, an area where the sea is rendered most accessible from the city.  The sea defence, maritime construction engineering and urban design challenges that lie ahead to achieve a feasible and positive solution to this, are yet to be detailed as strategic and masterplanning decisions continue to be addressed.
Cruise Terminal
The Valparaiso Passenger Terminal (VTP) built and run by a corporation formed by AGUNSA and Tesco at the Port of Valparaiso has a passenger terminal building located 2 kilometers from berths and consists of 4,200 m2 of space at the old warehouses site of the Port of Valparaiso. The VTP offers its facilities for fairs, corporate events, seminars and shows. 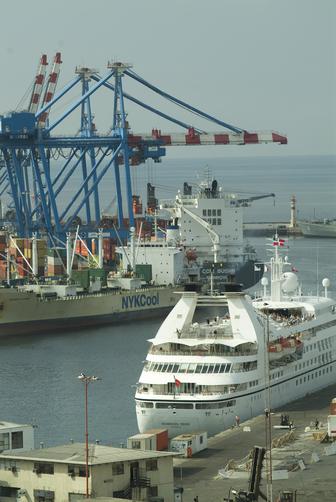 [source] Transport infrastructure
Metro
A new high-speed regional metro system called the ‘Merval’ opened in 2005 updated parts of the railroad that joined Santiago to Valparaíso and now connects it to Valparaíso with Viña del Mar beyond.  It is administered by the company Metro Regional de Valparaíso S.A., a subsidiary of the Chilean state-owned train company Empresa de los Ferrocarriles del Estado.  The metro extends throughout most of Gran Valparaíso and is the second metro system in operation in Chile.  It transports around 1.5 million passengers a month. [source] Trolley Buses
The bus service is operated by several different private companies, regulated by the Ministerio de Transportes y Telecomunicaciones.  The Valparaíso trolleybus system has been in operation since 1952, and in 2012 it continues to use some of its original vehicles, built in 1952 by the Pullman-Standard Company, along with an assortment of other vehicles acquired later. Some of the Pullman trolleybuses are even older, built in 1946–48, having been acquired secondhand from Santiago in the 1970s. The surviving Pullman trolleybuses are the oldest trolleybuses still in normal service anywhere in the world and they were collectively declared national historic monuments by the Consejo de Monumentos Nationales in 2003.

[source] Buses
The retro-style buses of Valparaíso and Viña del Mar, including the “O” bus that travels through Valparaíso’s hills on a route parallel to the ocean, contrasts the more modern Transantiago bus system of Santiago implemented in 2007. Local cycling organisations and enterprises such as La Bicicleta Geografica are calling for modernisation and the incorporation of cycle carriers to buses. 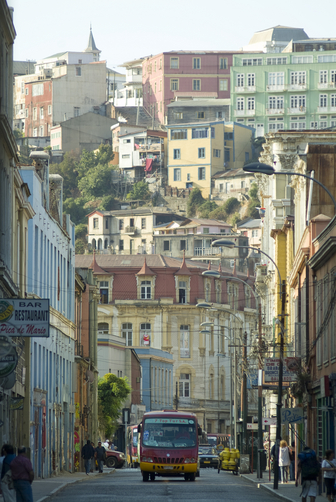 [source] Funicular elevators / cable cars
In the words of The World Monuments Fund (WMF), following inclusion on the Watch in 1996, it
“…aided a local organization in the restoration of the elevators through the Robert W. Wilson ‘Challenge to Conserve Our Heritage’ and a grant from American Express. The restoration of the elevators helped foster the rehabilitation of nearby public spaces and proved to be a sustainable model for the city and its historic transit system.
Civil engineers confirmed that while most of the structures elected for restoration were in stable condition, precautionary reinforcements were recommended. WMF’s involvement spawned several projects including the restoration of a once dilapidated 1898 house with typical features of the local style, the upper station house of the Espiritu Santo elevator, and house facades along Rudolf Street and the Guimera Promenade. Construction was executed with the same wood as found on the original structures to further protect the historic character of the city…”
UNESCO states that
“…the city has well preserved its interesting early industrial infrastructures, such as the numerous ‘elevators’ on the steep hillsides.”
and that
“…Valparaíso used to have as many as 30 elevators, the oldest of which, the Concepción elevator, was inaugurated in 1883. Generally, they have two wooden or metal cars, moving simultaneously in opposite directions. They are mounted on a platform to which are attached the wheels.”
Today there are under 10 functioning and local organisations such asascensoresvalparaiso.org are campaigning for the refurbishment of those no longer in use. [source] Earthquake and Fire Resistance
Earthquake Resistance
Because of the proximity of the city to the Peru-Chile Trench, the city is vulnerable to earthquakes.
Before the 2010 earthquake, which measured 8.8 on the moment magnitude scale, the last catastrophic earthquake to strike Valparaíso devastated the city in 1906.
Other significant earthquakes to affect the city were in 2008 (Papudo), 1985 (Santiago) and 1730.
The Chilean Consejo de Monumentos Nacionales produced information on the condition of the ‘Historic Quarter of the Seaport City of Valparaíso’, when the 2010 earthquake was recorded.  Although no building at the site has totally collapsed since this earthquake, the Iglesia La Matriz and the commercial port showed significant structural damage.  No damage has been reported to the funiculars, with the exception of the San Agustín funicular, whose condition was already precarious before the earthquake.
All buildings at the site, including some heritage buildings, have shown minor damage to the facades, the detachment of decorative elements.
Some of the damaged heritage buildings are already included in the restoration projects under evaluation.
The 1985 earthquake severely affected the port including the Muelle Barón which was the first part to be restored following it in 1990 and from 1995 to 1999 the restoration and modernisation of the principal commercial port areas.
The 1730 earthquake forced the early settlers of the city to move to the hillsides, giving rise to the foremost characteristic of the city today, that of a city built over hills.

[source] Fire resistance
Throughout its history the city has suffered numerous fires, some catastrophic.  The first recorded in the C17 associated with a port warehouse and this has been followed since with fires affecting housing, warehouses, shops and commercial and industrial buildings and important architectural and urban heritage, often excerbated by wind from the sea.
As early as 1829 that Valparaiso suffered numerous fires and that the city was declared to be “continually under construction, deconstruction, on fire and rebuilding itself.”